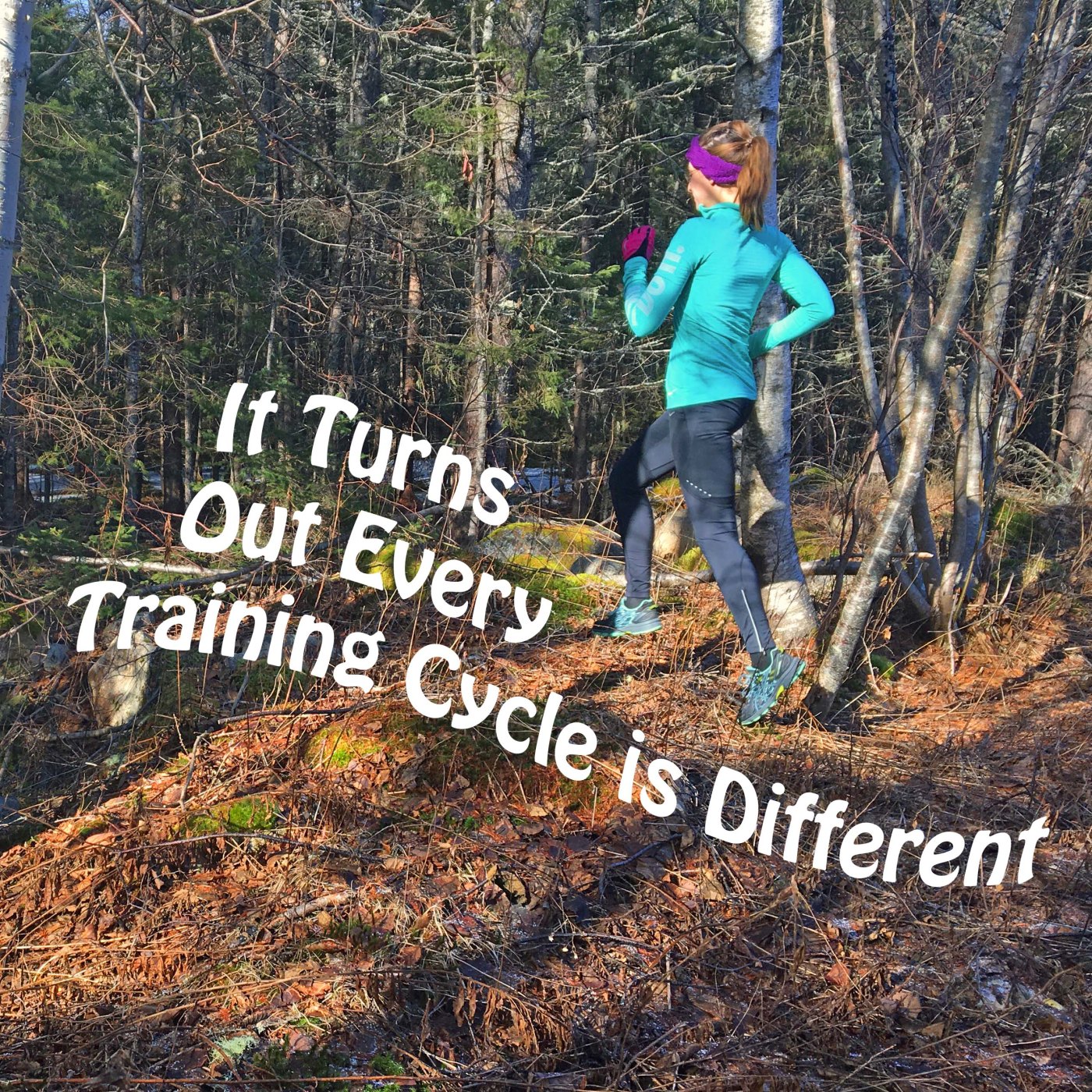 I might sound obvious to seasoned runners but I’ve only recently realized how true that is. I know I’m a slow learner but it’s really struck me this year that even when you’re doing the exact same distance, the same months of the year, even the exact same plan or even for the same race how your cycle goes can be wildly different and for so many different reasons! When you first get into running and then racing you spend a lot of time trying new distances. It takes a while before you find your favorite or hit that limit where you’re happy to stay at that distance for a while.

When I started repeating plans and distances I honestly and foolishly thought this will be just like last year right? Wrong! Even though all the training happened on the same roads and hills and the workouts were identical I eventually realized that how I felt, how my body felt and how much fun it was varied widely. Truthfully this year the fact that I wasn’t having as much fun as years past in half training really bummed me out. Due to that and some outside factors this was the first time in years I haven’t REALLY enjoyed a training cycle and probably not for the reasons you think!

We sometimes do a race just to cross the line whenever, but we tell people that’s the case way more often than it’s true! Usually we’re aiming to beat a previous time especially early in training. I have what some would say is a bad habit, I wouldn’t, of just covering the workouts the first time I train for a distance. I tend not to push as hard as I can when told and just get through those tougher workouts especially. I personally think it’s fine just to ‘just finish’ all the time, particularly the first time and it helps with the first cycle nerves. But… if you want to beat your previous time you’ll also have to beat your previous effort. That doesn’t necessarily mean you have to train further, farther and faster or pick a different plan but you have to do something different! After all doing the same thing and expecting a different result is supposed to be the definition of insanity. Whether you make your longest workouts longer, your hardest harder or more frequent you’ll need to step something up from last time. Depending on how many cycles you’ve already been through be prepared to do many of those things. Personally I like to try harder on my speedwork days and make my longs runs a hair longer. If you’re going to beat previous results you’ll have to do more than she did last time!

Really this could go either way, big or small. You might get lucky and an old injury that poked at you last time stays away or a new sort of hell may develop. My first half it was my knee the second the lady bits and blisters and the third some calluses. Each time it was a new thing or at least level for that particular complaint. If you’re coming back from an injury or trying to ignore one (don’t BTW) some little or big thing might pop up and change your relative experience of the same plan. If you had an injury last time but not now you have a license to give’r. But if you have to take a break it can be best to let go of long standing goals for that distance.

It could be good things or bad things that make you more or less dedicated for a given training cycle. Being insanely frustrated might lead you to run more while being super happy can lead to a case of the skipsies. It can be the simplest if things too. I often run after tutoring in the evening but being out of my easy to lock AWD car and into my needs two keys RWD car for a month this spring had me rushing home before things froze. It can be the littlest things like weather, a new exciting hobby, organizing an event, landing a big account at work or just being too hungry from work to put off dinner and rescheduling too many workouts because your too full that throw a wrench in your plans. Trust me it doesn’t take much!

But the flip side is that is something can clear in your life making it easier to get to your training. A terribly placed summer vacation might get canceled or your kids are all of a sudden desperate to go to camp during peak week. It’s also possible that a bad (or good) thing can just set a fire under you and get you out the door. Perhaps an on going issue in one of your relationships that you feel the need to run off, like everyday, during your training season could arise. Maybe you’re new boss is a jerk or maybe your kids are going through a super annoying stage and evenings away are just the ticket.

My life doesn’t change that much day to day or year to year. Certainly a lot less than some. We work 8:30 – 5 most of the year but longer in the summer and I do certain work things in the evenings sometimes too. Lots of people have schedules that swing widely through the year and from year to year. Sometimes an opportunity comes up that you just can’t ignore and throw kids into the mix it can seem impossible. I’ve found two viable options for fitting training in when you’re truly over the barrel schedule wise. One is to get up early and get your training in first thing. This is more viable for certain activities like running. You read crazy posts from moms especially about getting up at 4 to get their ironman training in. That’s not so viable if you’re looking to get to the gym or the pool, it might not be open yet. The other option is to embrace the world view that you’re day is not done until you get your workout in, no matter what. Here’s the thing I’ve realized though it’s not so successful trying to do a little of column A and then B. That just leads to a long string of “I’ll do it later,” at least in my life.

I’ve noticed that the time of year I’m training makes a big difference in how I feel mentally and physically working the same plan. Cold spring training and soggy pants made for some downtown issues but later that spring the eventual appearance of the sun lead to sunburn concerns for a spell. One thing that really changes things in the higher latitudes at least is the hours of the day you see the sun. Every year I put off and put off that first dark run but you know what, every year it’s not so bad! Running in the cold is naturally harder and slower, same for extreme heat. That alone will change your training. The clothes you wear are different as the seasons change and that makes for a different experience too. If you’re varying the time of year or mother nature is unexpectedly bipolar you’re experience is going to be changed too.

I think I’ve covered a lot of the bases here. Dare I even say all of them? Of course some totally new thing like a fire ant infestation might take over your life for a while. What ever plan, no matter how time consuming it is important to be open to a rethink part way through. Some times life can throw you so much of a curve ball that it might even be time to think about giving up the plan. There is no shame in that and there is always next year…

What to do about it

I think that a lot of these not quite problems that come up can be solved by thinking of each cycle as a fresh new experience no matter what. The first time you trained for a certain distance I’lll bet you gave it a whole lot more thought than when you were repeating. This serves quite a few purposes really. First of all it allows you to stay tuned into your body and stay ahead of the little and the big things. Are you getting blisters this time for the first time too? Is there an injury developing or is that bra style you’ve sworn by for years finally letting you down (then up, then down again)? Instead of just putting your head down and repeating everything you did last time thinking of it as the first time let’s you notice these things before they start to cause major issues!

No matter how many times you train for a race it’s still a huge accomplishment. ‘Pretending’ that it’s the first time again helps me to prioritize my training in the face of whatever else is going on in my life. It also helps to keep me excited. Literally no one but me in my life supports me any less or is any less impressed by my third half than my first. So why should I be? You were excited, motivated and it was a priority the first time you did it. Why isn’t it now?

Have you ever repeated a training cycle exactly? Did it feel the exact same as last time or were you shocked by how different the experience seemed? Maybe your body even handled the training load differently. Share you experiences below!

3 thoughts on “It Turns Out Every Training Cycle is Different”