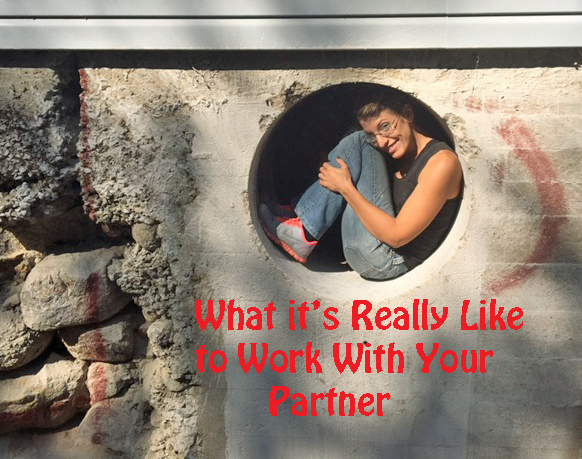 “Oh I could never work with him/her everyday!” It’s a phrase I hear often. Working with your partner (or family) certainly presents a unique set of challenges. For example venting about your jerk of a boss to your husband is strongly discouraged. In my case we’re usually side by side day in, day out, 6+ days a week for at least part of the year. This isn’t an advice article but you might find insight reading it too. Maybe you could, maybe not, but it’s not always with you think it will be and sometimes it totally is.

What we do in the summer at least is construction mostly. Honey’s company does marine and residential projects everything from new builds to remodels in both cases. Since we’ve cut back on the size of the workforce I tend to be onsite working rather than at home making lunches for the hoards. Since I’m off all summer I joke that if I were to just hang out at home at some point people might expect me to clean the house and ain’t nobody got time for that! Especially in the summer. So I pitch in and help out, plus it’s way more fun. In the winter some years I take more of a back seat since I mostly work evenings and weekends and sometimes almost nothing at all with honey like last winter. Which has a lot to do with why this blog finally got some attention!

So what is it like to work with your partner everyday? Great and not great all at the same time. A lot of people think that they would fight constantly and not get ‘a break’ from the same person that’s not our truth the real issues are a lot different, but there are strengths too. So that’s how I divided this into not so great things and then the good stuff, ever the optimist.

Honey feels like my boss at work and sometimes at home

I would say, Richard might not always agree, that I’m a pretty good employee. I want to make my boss happy and will even do unreasonable things to make that happen. Like taking over the Lab for essentially 3 years when my PhD supervisor was ill. But that means if Honey tells me he’s hungry at home or there is a task that needs to be done I can feel like it’s my job to do it. Even if no one asked me too. I actually find this part the most physiologically stressful part over all. Of course I also feel pressure to do all of the house things I usually do to even when work gets up to 70+ hours a week. That means that if family is visiting I’ll stay up to clean the house until 3 am, hang laundry on the line at midnight or put off runs or even bath time to clean the bathroom, grocery shop or change the sheets.

What I don’t struggle to give up is cooking we eat out constantly all summer, often (like 4+ days a week) three times a day. Cooking is something I love to do and even though it’s just the two of us I value sitting down to eat as a bit of quality time in the day. It’s part of how I was raised and missing this in the summer adds up. What it can add up to is some resentment especially since I do all the housework, no matter what time of year it is.

We have home fights at work, and work issues at home

We’re not really big fighters in general, what we do is avoid conflict until that becomes it’s own problem. But… in the summer when we’re together all the time little things trickle over from home to work and back. I might get up late and that will carry over into the first half of the day or Richard might snap at me a few times or correct me more often than I think necessary. Like one day this summer 54 corrections by lunchtime and pointing that our carried over into home time for sure. I think this is par for the course for any couple though and It’s never been so much of an issue that we’ve needed a strategy to address it, which we could do. Surprised? That’s what most couples think will be their biggest issue.

In other times of the year, we don’t necessarily get to spend a lot of time together at home. I take off and come home around 9, he’s sometimes gone before I wake up, although I usually try to get up for some groggy coffee. We usually have a few dinner’s together each week and spend some time together on the weekend. But we’ve had very different days and we have something to talk about. If we’ve spent the whole 12 hour day together working physically we’re both tiered and perhaps a little cranky. We both just sit and absorb the internet and if we’re sore, grunt. Add to this the previous point that means you’re not really repairing your relationship when you need to because you’re too tiered. We work from awake until pretty much dark which can stretch on past 8 on the longest days and 7 days a week unless it’s raining. So that kinda sucks but it’s 70 days. Now that the days are just a tad shorter it pretty much evens out again. So ignoring it and moving along is pretty much fine.

All the eggs are in one basket

Win loose or draw we’re in it together. This isn’t really a negative but more neutral. Since the majority of our annual income comes from the summer’s work it’s pretty important. Now for us it’s not all the cash but it’s the main part so it could be worse. In this line of work mistakes can be costly or someone really could get hurt. Non-paying customers, picky people demanding extras and accidents or business stuff can really derail us at home too. This usually means financially but there are other possibilities too. When it goes off there rails It’s a good thing because it brings us closer and reaffirms our commitment but not such a great thing for pretty obvious reasons.

There isn’t mystery as to how someone’s day went

Ever have a bad day, come home and take it out on your partner, just for them to be left wondering why? Well that doesn’t happen to us we know exactly how someone’s day went. Are they tiered, cranky or did something not so great happen during the day? Well that doesn’t happen to us. Even before an issue arises we take extra care if something in one person’s day was tough. We don’t have to figure it out, ask or get defensive we already know what the underlying cause might be. In fact if one of us is a little testy our minds automatically go the the trials of the day and not to taking it personally.

What you get really good at when you work with is your partner is compartmentalization. We don’t have a choice we’ve gotten good at compartmentalization over the years. If you’re in a big fight you have two choices put it in a box and go to work or not and loose out. Now I said before we’re not really fighters but that doesn’t mean we don’t get into one every once and a while. While they do tend to be about more serious stuff we can have stupid little petty spats too. Like this summer we had a stupid fight about subway sandwiches and it really escalated quickly. Anyway after a few minutes we put it in a box got back to work and then went our separate ways for the evening when we went home. But we got stuff done in the meantime. I’m sure it’s happened but I can’t remember a time we actually went home due to spat. But it’s not a bad thing to be good at as long as you eventually deal with the issue. Not at all recently but we’ve even been in an argument in the car, gone to a 4 hour dinner party treating each other sweetly, and then picked it back up in the car on the way home.

I mean literal little things. Like house cleaning, buying new socks instead of washing them, ordering out again or owning bread and milk at the same time. Those little should haves can really annoy you when they start to stack up. But since we’re both working so hard it’s easier to let that go. We also don’t really nag generally but there isn’t any mentioning of should when we’re side by side all the time.

I think it makes us less likely to fight

Since if you get into a fight with your partner you work with home and work suffers because of it. You also aren’t getting an 9 hour break from it for the foreseeable future, you’re less likely to start shit. I imagine it’s like family vacations, you won’t be getting away from those people any time soon so it’s easier just not to start anything. I know I’m more likely to make a snarky comment if I’m on my way out the door for a few hours rather than when we’re heading out together.

No one feels guilty about me time, in fact it’s encouraged!

When we do have time to ourselves, and it’s not raining, no one gives me side eye when I utter sentences like, “I’m going for a run, see you in two hours.” Or when it is “I’m going to go thrifting see you after supper.” Just like honey playing with his RC’s or well that’s it mostly for him. We get how hard work is and the expectations of home and we really do welcome a break from each other. We’re both human and we like some alone time. Richard is an early riser and I’m a night owl, that probably isn’t a coincidence either. We’re a bit spoiled in this regard that we don’t have kids at home so this is an option for us. What’s nice too is when I take on a bit task like 1/2 training with lots of built in me time, my partner and boss makes sure I have time for it and I try to return the favour. So working with your partner doesn’t make you a co-dependant mess but…

We really do miss each other when we’re not together

We do spend an in ordinate amount of time together and you start to get used to that. Not all the time but sometimes when were apart for an evening or a few hours, one of us will notice we genuinely miss the other one. It’s nice to be missed and it’s even nicer to see you partner after your’ve been missing them. It’s nice the hear when you come home, “I missed you when I saw this post because I wanted to tell you about it,” even if it’s silly. Even if you don’t work together you might steal the trick from us, just tell each other when you miss them and explain why.