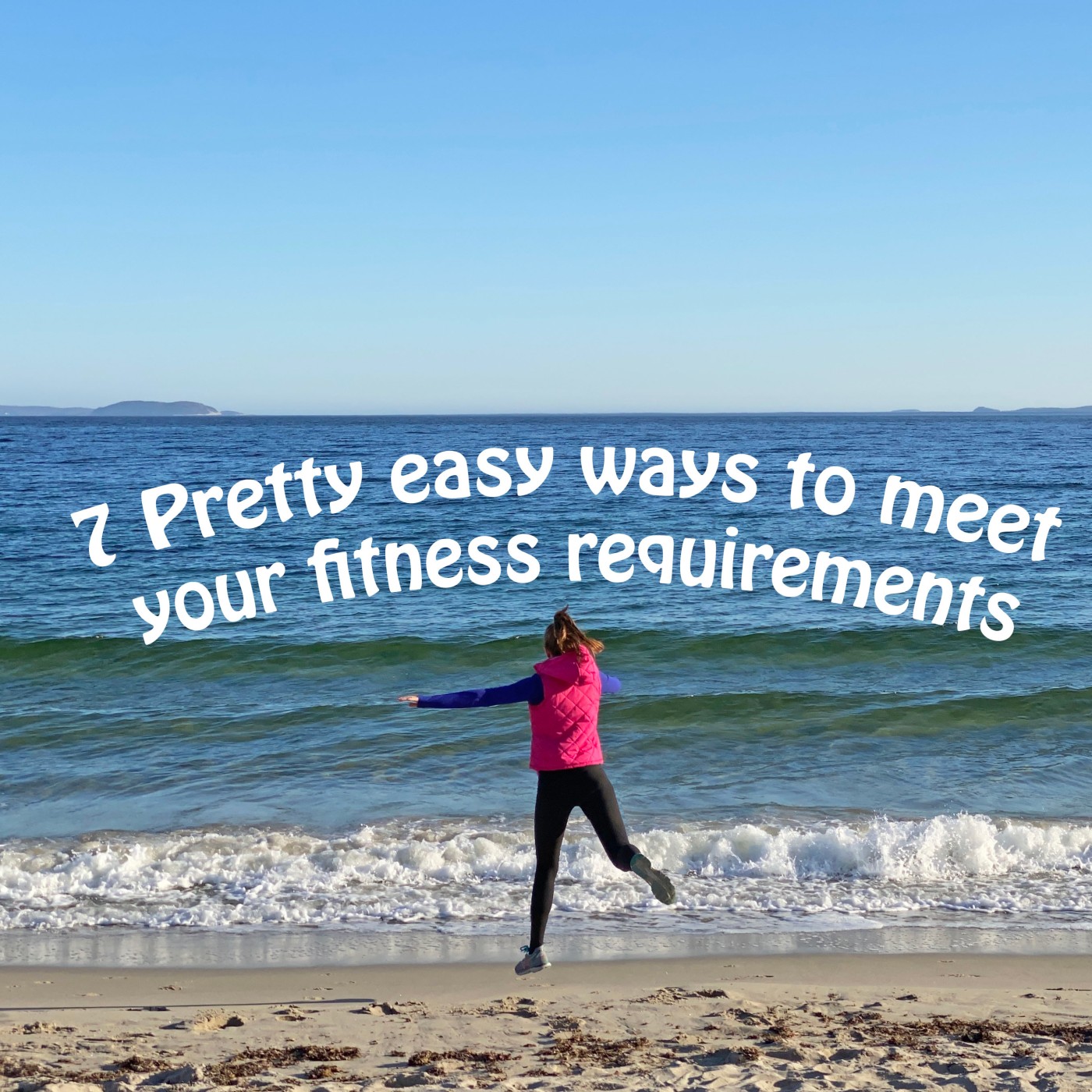 When we think of people in our lives that are really fit and healthy we tend to think of the weekend warrior dedicated types. You know the people that are always posting medal shots of their latest marathon on social media. It seems impossible to imagine logging 50+ miles a week (and it very well might be) but it’s not hard to be fit enough. How fit is fit enough? There is little variation from country to country in movement recommendations. That is 30 minuets of vigorous activity 5 times a week. That means you could talk but you really don’t want to. Did you know that only 4% of people meet those guidelines? While moving on 5 separate occasions during the week does have some slight extra benefits it doesn’t really matter THAT much. So if you can’t dedicate time on five separate days during the week there are options. Rather than thinking of those fit people as impossible to emulate these are some pretty easy ways to meet those fitness requirements and be one of those smug 4% people.

Park well away from work

This is such an easy and in some ways convenient way to get all of your fitness requirements in one (pretty) easy step. This is actually something I really wish I did in grad school. If you work in a spot where parking is really expensive or really hard to get why not just park further away. Specifically 15 minuets away. Then walking back and forth to your car five days a week is all the exercise you need. Our parking passes were not expensive ($150 a year) but they oversold passes to spots 7:1. I used to have to get to lab by 7:15 to be assured a spot. If I arrived at 10 am I could literally drive around for 45 minuets looking for even a meter which I had to pay extra for. In a lot of ways it would have been so much easier to just park 15 minuets away for free and arrive at a more reasonable time. I could have just had a warm hat and parka in the winter and an umbrella in my bag and I would have spent so much less time stressing and looking at the clock in traffic. If you happen to park in a very expensive spot you could literally save thousands of dollars a year this way! Or maybe you could even bike to work!

A most of the year active hobby

Being consistent throughout the year is important but … if you are really killing it most of the year that’s probably awfully close to good enough. If you are moving three or four hours a week 7-9 months of the year you can think of the other months as a bit of an off season. There are lots of hobbies that could meet this criteria but realistically can’t be done all year long depending on where you live and your lifestyle. Think about things like:

If there is something you love to do and most of the year you dedicate a whole weekend afternoon to it and maybe another shorter session on one of those gloriously long weekdays then you might be good over the year as a whole. I live on the east coast of Canada and the weather is really changing fast. I am pretty old but as a child we usually wore our snowsuits for halloween and it snowed through March and into April. Now we really don’t have snow that sticks until January and it’s gone by the first-ish of March. January and February are still pretty rough though!

A walk most days

It’s not fancy or complicated but a good vigorous walk most days will do the trick. A popular time is usually after supper and walking is possible most if not all of the year. You could also take half of your lunch break each day to get away from work and get a good walk in. This is a great option because it’s always light out and usually the warmest part of the day. It’s great for self care, mental health and of course meeting your fitness requirements easily. After a few months you’d be surprised how mush it becomes a habit in your life. Even though it’s not fancy it is pretty much as good for you as running for the same amount of time. If you do become a regular walker I encourage you to take it as seriously as a runner would their sport. Download an app to track your progress, add the odd hill, get some cute outfits for every season and of course make sure your shoes are supportive and up to the task.

Get an active job

This is admittedly not an option for everyone and I would argue is rarely ‘enough’ on it’s own. But if you are looking for a job, you have downtime in what you do every year or you’re looking for a side gig why not try to find something active that makes you money? Especially if this is just one of your jobs you might not have time for a lot of movement otherwise. Jobs like waitressing, landscaping, working some retail jobs and lots of other ventures can incorporate some more movement into your life. You could also think outside the box like refereeing or coaching a sports team, taking the odd zoom call from the treadmill or walking to the odd meeting into the job you already have. While it might not be enough to get you all the way to meeting your fitness requirements it is one hell of a head start.

Some of us need a lot of structure to get moving others need to pay for it to get there. Why not sign up for two fitness classes a week to meet those fitness goals. No shame in that, but if you’re paying for something you might as well go right? Yoga, spin, aquafit and other group fitness classes often clock in at a little more than an hour so sign yourself up for two of these every week and then go and you’re done. If I could go back and redo certain times of my life this is something I would change. There’s always an excuse to work more but had I put a few bucks on the line I would have never missed a class!

I’m putting this out there in a running way but… it really could apply to many activities I just know the most about running. Thinking about it I guess triathlon and cycling have annual seasons too but this could apply to other things as well. Lots of runners are fully engaged in their sport for race season and then well not so much. Race season usually starts in the spring and goes early into the fall. Some runners do a little race most weekends (which could be ill advised for injury) or build up to some super goal over the whole season. Some athletes just love being in training and others just love races. If April comes and you’re all in until the end of October then that’s cool! If you’re running and training way more than two and a half hours a week in race season than that sort of can be time in the bank. There are a ton of good reasons to keep up with some running outside of race season which we will be talking about in a post down the road. So maybe follow to get notified. If you just love race season than I say double down and get the most out of it!

Make it a family or social affair

If I suggested to my mom, sister or several friends that we go for an hour long walk and really reconnect they would do their best to drop what they were doing and join me. Maybe for you that’s you and your kids, your partner or someone else you love. Involving others is always a great option. What if you took a whole afternoon every weekend to get moving with someone you love. Or… if you want to take another tact you could invite yourself to join someone active on their thing. We’re always happy to show off our thing to someone new!

All it takes is 2.5 hours a week to meet those minimum fitness requirements and that actually makes you part of the #fitlife community! Even though some of our members are way more intense that that these are the sorts of easy things you can do to get there. There are obviously WAY more options than this but it should get you thinking. What to you do to easily meet your fitness requirements that works for you? Leave it in the comments below!