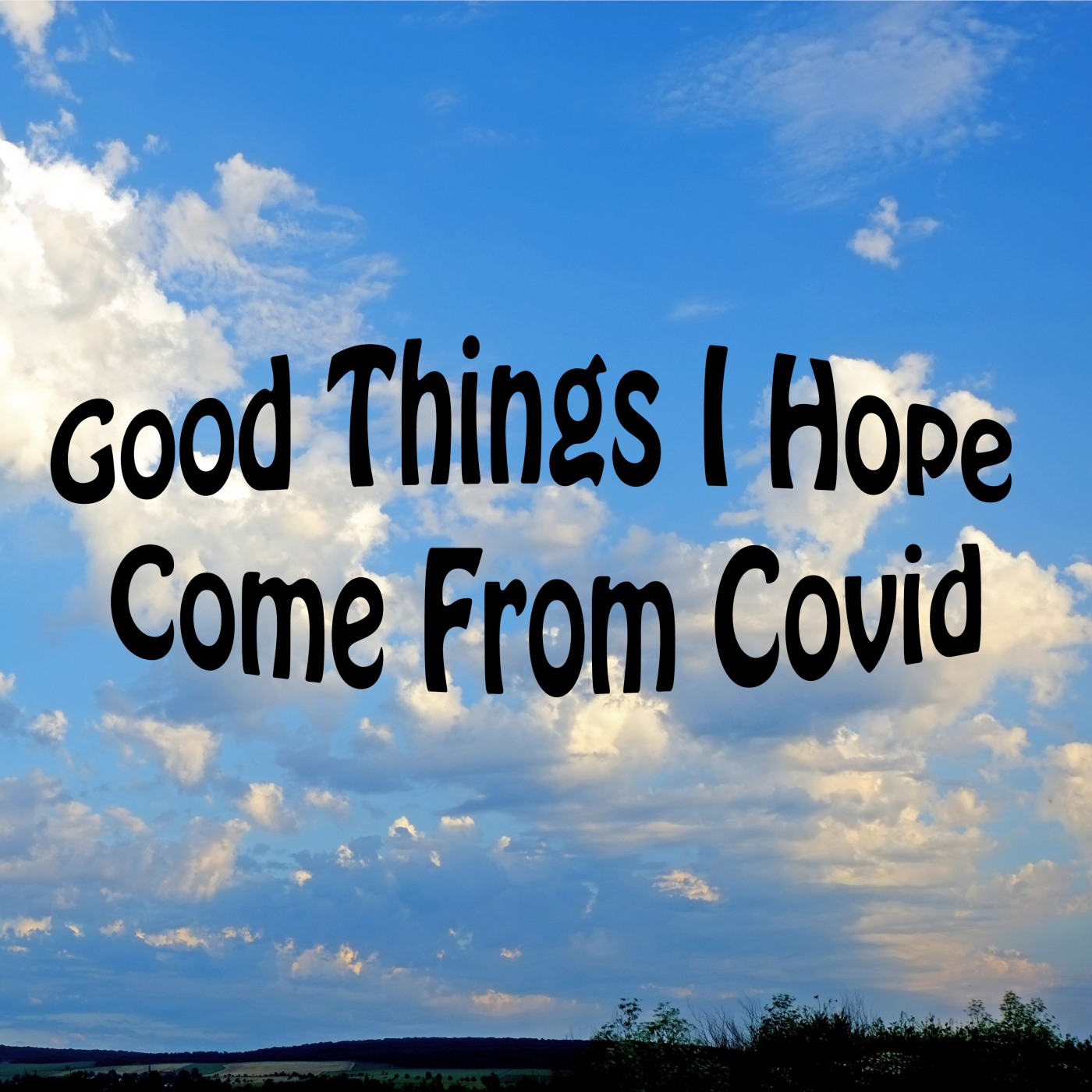 This is NOT a good thing overall not in the big picture or the small one. This has put everyone’s health at risk, caused so much anxiety and a lot of this happens because of financial consequences as well. But every experience no matter how bad presents us with a chance to learn. Every bad thing that happens too does have a silver lining too. Some of these pandemic problems though could drive some post-pandemic progress. Where I live in Atlantic Canada restrictions are starting to ease so maybe, just maybe we can start to look at the little things that might be worth keeping around.

I don’t know how it is where you are but here so many people are out walking, cycling or just moving their bodies it’s become something for public health to manage right now. Our (mostly outdoor) restrictions are starting to ease. We were never banned from exercising outdoors, People are looking for any excuse to get out of the house. Fast forward a few weeks and now a bunch of people have legit fitness routines started. Everyone probably won’t but it is one of my hopes that more people start giving their body the movement it craves. Even if people don’t keep up a regular exercise routine I hope lots of people keep up with weekend family walks. Wouldn’t that be a great thing!

I’m a cell and molecular biologist by training and nothing gets my goat more than anit-vaxers. That said I won’t be writing a post about it but it does bug me. Vaccines are super important and safe, full stop and that’s not just my opinion either. I get it though people have personal choice with how they raise their kids but I’m not sure that exposing your kids to potentially deadly diseases should be an option. It’s particularly upsetting that enough people are skipping vaccines in certain areas that it’s starting to negate herd immunity. Some people can’t be vaccinated because of medical conditions or weird allergies. It looked like my little nephew was like that for a while and its scary to think what kids at his daycare weren’t vaccinated. He’s outgrown those allergies already, thank goodness but he’s not the only one out there! The truth of the matter is that the only reason privileged and misinformed people can ‘get away’ with not vaccinating their kids is because the rest of us are responsible humans. I saw the meme below and hoped everyone in the world saw it on their news feed too. While I still think alert not anxious is the way to go with Covid I hope that people realize that this is humanity without one single vaccine! While Covid is serious it is not nearly as infectious and deadly as lots of the things we vaccinate for, like smallpox. Things like Polio disproportionately affect children.

If even half of the people that were vaccine hesitant see the light and 25% of the parents that didn’t vaccinate their kids change their minds that’s huge progress. We now have a treatment for Covid which is amazing but a vaccine will be what finally ends this especially for our most at risk populations in long term care homes. Maybe not our parents or even grandparents lived in a world without vaccines anymore and after all this that won’t be true anymore. It’s a terrible way to learn the lesson but I hope it is a lesson we all learn. Also if you’ve realized just how great scientists have been in the lives we live today, thank one and then head to a science and technology museum and learn a whole lot more!

In Canada our healthcare system and public health have done a great job working together to keep our hospitals from getting overwhelmed. I’m not aware of any actual cases where healthcare workers actually ran out of PPE but it looks like our national stockpile wasn’t quite big enough. At some points doctors and nurses were anxious and conserving protective equipment which isn’t ideal. If something like this happens again that shouldn’t be something that’s on their mind at all. Where we really need to take a long hard look is at our long term care homes. Well over half of Canada’s deaths have been in long term care. The system wasn’t working perfectly before all this but Covid really has exposed the shortcomings there in. Also it hasn’t been the same across the board. Honey and I are lucky that we don’t have family members in long term care but we do know someone who runs a network of homes. In our Province of a million people we’ve had about 1000 cases and 38 deaths. 35 of those deaths have been in long term care and 32 of them in one home which did have a poor reputation before this. 10 homes in the province have had cases. If some can do well with this then so too can the others. Similar situations have sprung up across the country. Some homes have done very well had pandemic plans in advance and even donating equipment to those that have been hard hit. But we really need to take a close and hard look at long term care and it’s regulations in this country.

For about 4 weeks give our take there has been a big slow down in our healthcare system. Non-essential surgeries haven’t been done and some treatments have been delayed. Our healthcare system has already started to ramp back up and things are returning to normal as our curve has flattened. We are lucky and doing pretty well. That’s not true for a lot of other counties and healthcare systems. In those countries after this is all over they NEED to take a long hard look at what they are doing. The quality of care and even the entire model of how they deliver health care need to be examined after this very thoroughly. Look at the systems and public health measures of countries that did well and those that did not. Nothing can be off the table. If we fail to learn from this then we really did fail.

I’m just going to say it there was a lot, a lot of internet bull$hit about Covid in the early days of this virus and one world leader just kept that up all the way through. Holding your breath, Tylenol and drinking water constantly turned out to have no effect of Covid. Remember when we all thought aiming a hairdryer up your nose was nuts now we have to tell people not to inject Mr. Clean! Not that this was an entirely new set of false phenomenons but it was a it different from where I was sitting this time around.

Usually I try, try, try not to be that girl who posts ‘that’s not true’ on people’s posts with a link to a reputable source. Sometimes the part of me that’s been through peer review just can’t help it though. It’s rare though I promise. I usually only do it when it sounds believable enough and is dangerous enough to hurt someone. Instead I usually just unfriend you or unfollow you if you do it too much, #sorrynotsorry. I did do it once this time around but… that’s because every time I was tempted too someone beat me to it with a WHO link. Nice! The one time I posted the guy said “thanks Allison” with a very nice emoji and took it down. However a lot more of my Facebook friends seem to be virologists and epidemiologists then I ever thought!

Mainstream media and people this time did a good job of encouraging us to only put stock in trusted sources and I think stuff was debunked pretty fast, which is great! Overall I think we all did a better job staying well informed and fighting miss-information this time around when it was most important and it was pretty respectful from where I was sitting at least. I do think that information surrounding elections is really important too but this situation was right now and life and death in those circumstances and it’s great we did a good job!

If we can thank that idiot with the biggest platform in the world in all of this it’s because he really pulled back the curtain on the fact that literally anyone can say what ever they want and get away with it. It doesn’t make it true. It also can cause people real harm! That’s going to be a long fall for some people but after we’ve had a sitting president suggest injecting all purpose cleaners (usually containing bleach and/or ammonia) it’s a fall we ALL need to take. Hopefully hearing the crazy stuff we have and dealing with it fairly well over all this time will this time will make us more careful with what we just accept as true in the future.

Science is our hero

In 1918 we had a pandemic and the fact that humans could be infected by virus’ was understood by some but it was not well known or well studied yet. There were no vaccines but social distancing was a thing. Fast forward 100 years and within the first 10 days of Covid in China the entire genome had been sequenced and shared online. Hours after that scientists that were experts in the field compared it to the genomes of all the other known viruses and animals using public databases. That week we knew it had a connection to bats which is cool but we also had dozens of vaccine targets and research groups have been hard at work with those ever since. Now we have many in development and one that might confer protection in primates so far.

Dozens of existing drugs have been tested of efficacy and we now have one that shows results. Testing capacity in labs around the world has been doubled, doubled and doubled once again with staff and supplies that were already available. Epidemiologists around the world counseled leaders and now many curves have flattened. Putting all that knowledge to use is just amazing and it’s saving us all.

Before all this happened there was an undercurrent of mistrust/distain for those that are really well educated and it was bubbling up. It has been for about a decade now. About that long ago I sat through a very uncomfortable dinner party with that distain of academics and a very drunk host. We all love to say he/she isn’t that smart because… Maybe they can’t back into a parking spot but they know their was around a TATA box for sure. If you don’t know what a TATA box is it’s actually pretty basic for you know living things. It’s cool though everyone that made it through second year biology does and there are lots of us, like a lot a lot! Let’s hope that as a group we start to give those highly educated specialists the respect they deserve. Especially since very few of them are getting rich doing it!

Like I said this isn’t a good thing overall in the big picture and a lot of the small things too. Personally when I have to go out in the world I find myself running out of hugs and kisses for people (as my little niece would say) in record time. Which is to say I get a little testy and let’s hope that’s over soon! What change have you noticed in the world or your life that wouldn’t completely suck if it stuck around after? Leave it in the comments below!

One thought on “Good Things I Hope Come From Covid-19”