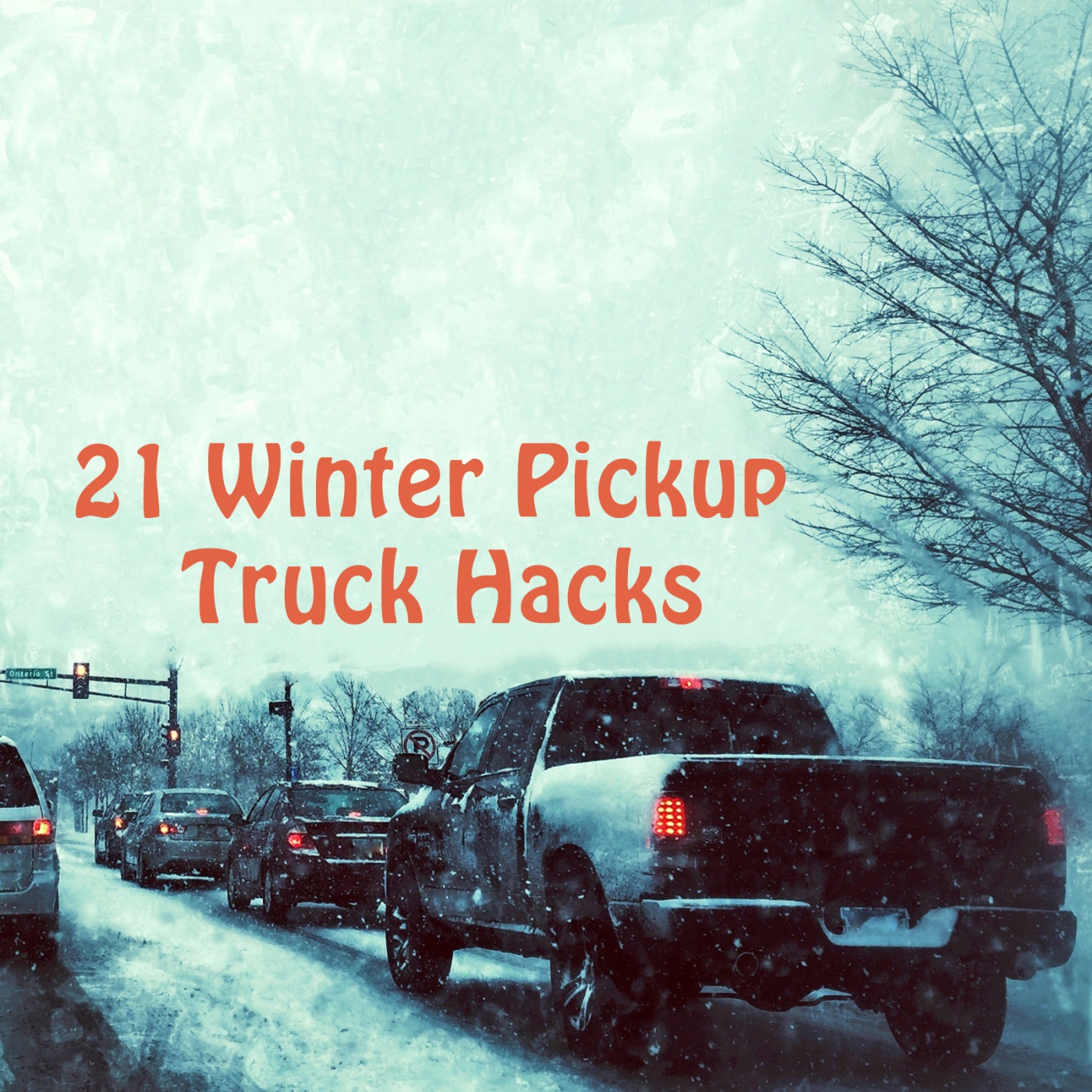 Driving a pickup most of the time is really no different than any other car. Let’s face it pick ups are really no longer used just by trades people for actual work. They are one of the most popular choices as a family car with king cabs and up to 6 seats. Yes they are more capable in most situations than your standard sedan but there are some drawbacks and differences when it comes to winter driving. Done right driving a pickup in the snow can be one of your best options, well, other than a DOT snow plow. Done wrong and you might be the chump getting your truck towed out of the ditch while all the Carollas and Civics pass by!

I drive a pickup and because of the sheer weight and size of it I think operating a vehicle like this means I have more responsibility than other drivers on the road. Take notice of local traffic accidents the fatal ones often involve pickup trucks. Even though I might be more likely to walk away with minor injuries that doesn’t mean that who ever I hit will too.

Some of this is specific to pickups but there are a few that apply to SUVs and other long vehicles too. These days a ‘real’ high driving, long, built on a tuck frame with 4WD SUVs are few and far between, but if you happen to have one of those survivors, this applies to you too. The physics nerd in me loves this stuff but the anxious overthinking winter driver does not. Here’s what you need to know (and do) to end up just like the drivers in the commercials for these trucks!

How are pickups different

This is the big one every pickup that I’m aware of is rear wheel drive as long as 4WD is not engaged at the time. Real wheel drive vehicles are know to be squirrely in low friction situations. Which is to say they slide more easily. With such a long wheel base and a high curb weight they can be down right scary. Even if you have a 4WD system if it’s not on when you encounter those sorts of conditions suddenly you’re stuck with a slide prone truck. When a front wheel drive car slides your instinct to steer out of the skid is the right one. In RWD you should fight those instincts and steer into the skid. That’s a hella hard thing to do! But for honey yelling turn your wheel at me repeatedly I nearly parked my 2WD truck in a pool by way of a fence and embankment! Since you could hit ice out of 4WD I recommend all pickup drivers pay attention to this one.

This is a really big deal when it comes to driving a pickup in the winter too. A vehicle that has an even distribution of weight overall and carries the majority of the weight over the drive wheels will handle best. Pickups suffer in both of these regards. Most of the weight of any car comes from the engine and the transmission in pickups those are really big heavy components.  In a smaller front wheel drive car that leads to more even distribution and the front wheels ARE the drive wheels. Since pickups are so long and RWD the weight distribution is way worse and most of the weight is over the non-driven wheels. Both of these things make a pickup more likely to slide and harder to control once it does.

Pickups weigh a ton! Several actually! Before you ever put a load on it that affects your winter driving. Mostly the heavy weight of this vehicle makes it harder to stop. Remember back to your physics classes because of their heavy weight they have more inertia than most cars on the road. It’s a function of mass and velocity really so at any given speed a heavier vehicle has more inertia which is a resistance to changes in motion. Even in clear conditions these vehicles take more time to stop but that is dramatically increased in low friction conditions. It also makes it harder to correct a skid. It also doesn’t matter what parts of your drivetrain are engaged your breaking power doesn’t change.

Pickups as expensive as they can be often lack common features that other cars have. For example they often don’t have a rear window defogger or heater there. The sheer size of them can make clearing snow and windows pretty hard. Once all that snow in the box freezes a few times that ice can get pretty heavy sliding around and potentially making you slide. Shoveling out an 8 foot box sucks, I know! Certain common add ons like a back rack can make clearing frost, ice and snow next to impossible. That and the sheer size of the things make it tempting to skip steps.

I once had a gay man who worked at a fabric store tell me how weird it is that straight boys are so into their trucks and I agree. One of the first things they tend to go nuts over is tiers. Great big knobby ones are a perennial favorites. Even if they are marked all terrain they are not for winter! We used to run these all year round at my dad’s suggestion but once I had actual winters on a used truck I bought I realized my mistake. Even though you have 4WD winter tiers are still a game changer. Actually I run one set of load and speed rated 10 ply winter tiers year round and replace them in the fall. The softer compound at lower temperatures are much safer and the tree is specifically designed for snow and ice not mud! Plus then I’m ready for that weird early snow every year.

If you’re driving a 2WD pickup this winter I’m praying for you. Not really I’m an atheist but I’ve been there and it sucks. Not all hope is lost though there are quite a few hacks that will help you here. Do as many as possible but this section isn’t for you. Again check out this article for an in depth explanation of how drive systems work if you don’t know as much as you should about 4WD. These days they do make pickups that don’t have real 4WD but are misleadingly labeled, so you should do some research and find out exactly how your system works. If you have a real 4WD system you have one of the best tools available to you for winter driving. However if it’s not engaged properly at the right time it’s useless. I put this section last because if you hit a slick patch without warning it’s no good. That means you still have to do all the other stuff too.

Sometimes driving this sort of vehicle can make a driver over confident which can lead to disaster. Slow down, follow at a longer, safer distance and know how your specific vehicle works. Even if it’s just getting a buddy to pull you out of the ditch it seems to hurt just a bit more when your ride is a truck. What are your favorite winter driving tips? Leave it in the comments below!