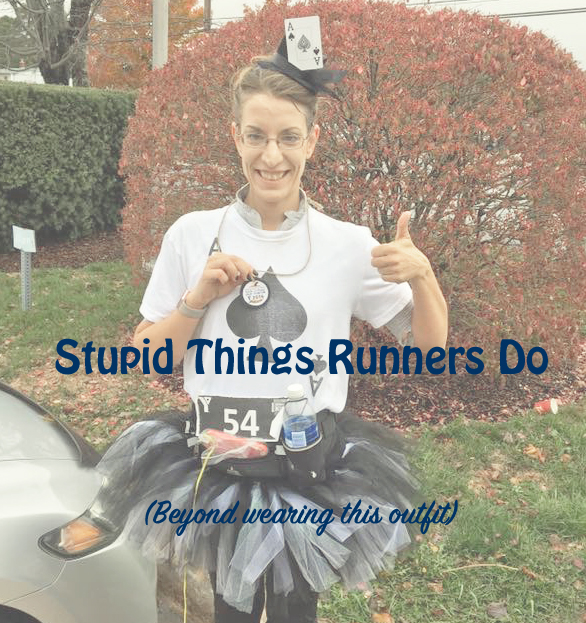 This isn’t a tongue in cheek funny post, not run 26.2 miles in a row, not run up the same hill over and over, this is literally about stupid things that runners do. I’ve done some of it other stuff I would never do, unfortunately some of it I might do again. If you’re doing this stuff it’s in your interest to stop. 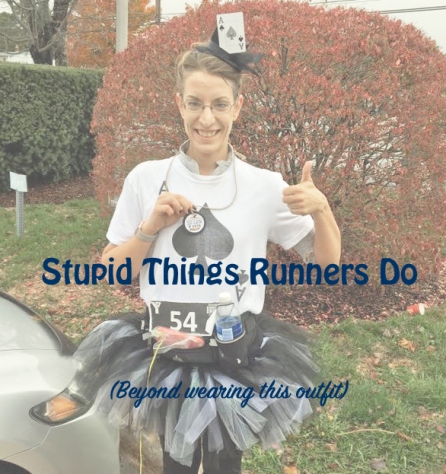 Why oh why are people running with traffic especially on my narrow, rural road that only has a shoulder. Technically if there is a sidewalk you can run on whichever side you want. Consider always running facing traffic since it makes you more visible. It might not be such a big deal if there is a wide swath of grass separating the sidewalk from the road. People are programmed to notice faces rather than the backs of heads. Keep in mind drivers will always be more likely to notice you if you are facing them. Plus you’re out for a run, just cross the road, what’s a few extra steps? Have I ever done this, no.

Cheating/ Running as a Bandit

Alright so up until three days ago I didn’t realize that this was a thing until I read this post from a fellow blogger. It’s a somewhat cheeky post (I think) about how to not get caught cheating to qualify for Boston. What’s clear from the pictures in there is that some people do. Why of why would you ever do this? Running is a sport where you compete against yourself so that’s literally like cheating at solitaire! Maybe it’s because I know I’ll never BQ and right now I have no plans to ever even marathon but, really?

And then there is running as a bandit, which means basically being a party crasher at a race. Except the party is at the crack of dawn and involves a lot of sweating and no alcohol at least until it’s time to go home. Some say if you don’t take any resources it’s no big deal. But it still is stealing and that’s not nice. If you can’t afford it reach out to the organizer I bet they’ll let you run for a reduced price. But you could literally ruin it for thousands of other runners. Races require insurance and that requires due diligence on the part of the organizers. If you hurt yourself, potentially taking out other runners in the process that could make the race uninsurable the next year. Have I ever done this, no not really, well sort of. Our city’s big road race was impeding my travel from pictures in the park to the ceremony of my sister’s wedding where I was maid of honour. So I hiked up my evening gown, threw the flowers and my heels in a bag and joined for a few 100 m on my way down the isle. You can read all about it here and see a picture of the dress here.

Run in dark colours in the dark

There I one particular runner I’m thinking of in a neighbourhood I tutor in but others are guilty too. He runs in the dark in black pants and a black jacket in the fog. It’s a bit of a death wish really. At least wear bright colours! Have I ever done this? No! In fact when I run in the dark I run with a reflective headband and ankle bands. I wear a headlamp, a led light bar and a flashing light on my back. In fact our volunteer fire chief and my mechanic once asked himself, “what idiot is that, oh, It’s Richard’s idiot!” when he passed me. So needless to say light colours are a given.

One of my former honours students used to run at night, in dark colours she was short and tiny. She was also a germaphobe so she didn’t push the crosswalk button triggering the overhead lights. This is also strong in the death wish category. If you need to ask if I do this, re-read the previous section.

I’ve done this, I’ve even raced injured and PR-ed. Actually in the race I’m doing again this weekend. Stay tuned for a recap. It’s so not worth it. It just prolongs your injury as a best case and can really worsen it too. I’m not talking about running for as long as you can pain free when rehabbing but knowingly running when you know you should have stopped or not even started. I popped out my knee at yoga the week before the last bluenose 10k I did and I knew in the first 500m I shouldn’t be running. I’m still dealing with the fallout. No medal or run is worth the year my knee and I have had. Will I do this again, I really hope not.

Not warming up/ cooling down. stretching

Guilty, guilty, guilty. There isn’t good science behind preventing injuries by stretching pre or post run. That being said it can’t hurt. You really ought to work up to it before you start full tilt by walking a bit at least. Taking it easy at the end can lessen the soreness you have after your run too. Do I do this? No. I might stretch but I run out the door from the kitchen and push the pace hard with a powering to finish hard.  I think I’m too hung up on the pace of my runs and feel like I’m robbed should I walk at the start or end of a run. Will I do this again? Probably later this week, definitely by the end of the month, even though I know better.

Assuming they have the right-of-way, even when they do

Pedestrians have the right of way in intersection, marked and unmarked crosswalks and definitely in crosswalks with overhead flashing lights. You totally do, cars have to stop for you. But the thing is you’re going to loose every single time in the runner vs. car challenge. Before you enter an intersection make sure that you make good strong eye contact with a driver before entering. If there is even the slightest hint of a question let them go first or wait. Usually what will happen is you start to go and so does the driver and you almost connect with their front passenger bumper. As terrible as it is to say these drivers are often older and you really do think that they have seen you.

That being said last summer I was sure a driver saw me and I crossed in front of the car, then she started to go and almost hit me dead on in her line of vision. I’m almost certain she would have had I not jumped. In the moment I gave her the finger, oops sorry, I blame it on adrenaline but she was certainly not older. I feel bad about that now because it was an honest mistake on her part.

But it gets more extreme than that too. Last summer in broad day light a woman decided not to stop in out little town’s only cross walk with flashing overhead lights on a straight of way in a 50km/hr zone. I waited since it didn’t look like she was slowing down. I shrugged at her in disbelief as she blew through the intersection flipping ME off! Anyway the following week we brought some cookies to a customer we had always worked for from a different province that had moved into town. We had only met him in the past and guess who answered the door? Yup, his wife, the lady in the car who flips off pedestrians in marked crosswalks. Welcome to our small town!

Spending too much on their sport

It certainly is easy enough to do. Some sneaker company is always introducing technology that will make you 4% faster, your shoes last 20% longer, there’s a new Garmin, a new technical fibre or a newly introduced bucket list race. Things that are twice the price they should be and then there is a 25% off one day sale that makes you think its a great deal all of a sudden and we are suckered in. I’m actually not too bad in this department but that could be because people in my life buy me the fancy running gear for Christmas and birthday gifts. Happy Face :). Just try to differentiate between wants and needs!

Not spending enough on the sport

I used to be guilty of this one. I bought into the all you need is a pair of sneakers and a dream myth. I ran in cotton shorts and tees and worn out sneakers, no wonder I hated it! I have to credit my generous family with turning me around and setting me on the right path with this one. My sister gave me the original nike+ iPod set up and I learned how motivating tracking your runs could be, that got stepped up a notch when honey gave me an Apple Watch. My mom picked up some technical gear for me over the years and once injuries started creeping into my life I got serious about tracking the miles on my shoes. I probably remain too stingy considering it was only 1/2 marathon training that finally got me to buy a $12 hydration belt on eBay, also life changing! In fact I even wrote a post about what’s worth investing in if your interested. But I’ll probably always run at least sometimes in my mismatched thrifted clothes and roll out my muscles on my homemade foam roller. If you need some help in opening that wallet remember that if you were a member of a gym that would cost $50 a month and you’d still need to buy all the same gear. That’s $600 a year your saving. Spending money on races to motivate you to get out there or gear that prevents you from becoming injured is definitely worth it. But if it’s just going to make you a bit more comfortable it’s probably worth it too. At least that what I keep telling myself. It’s an investment in your health really.

One thought on “Stupid Things Runners Do”