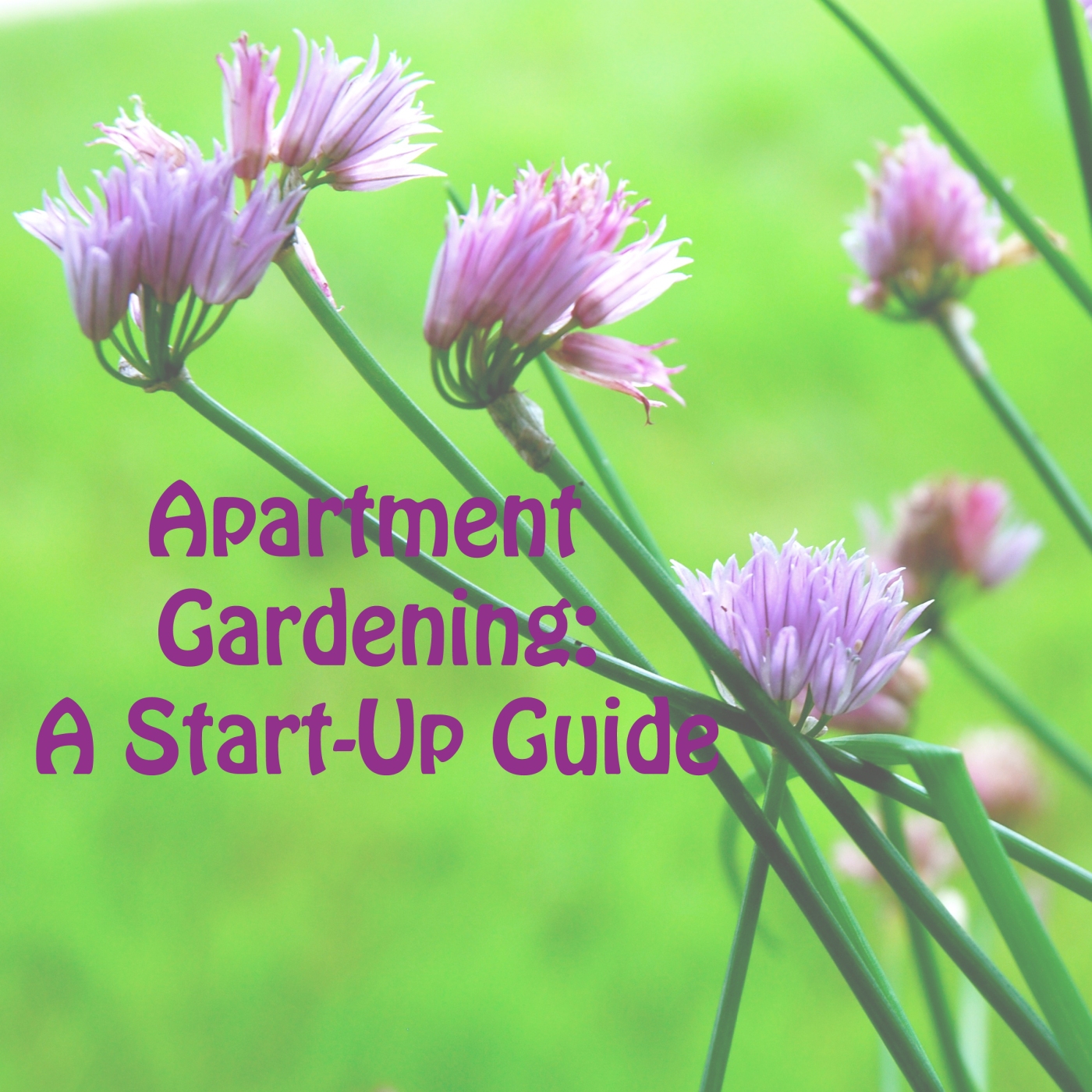 If you have outdoor space you can grow your own food and lots of it if you want to. I’ll let you know how to prioritize what to grow, do it for next to nothing, do it without a car and make it theft proof if you are on the ground floor, well the planters anyway. No matter where you are in the northern hemisphere anyway, it’s growing season so let’s get started! When I lived in my ground floor condo I used to grow a decent amount of my own food in about four outdoor planters and a few pots on the kitchen windowsill. My neighbours grew a lot more. My garden is just, just getting started this year since we had frost warnings up until this weekend, and tonight! sad face 😦  So forgive the pictures they’re not great.

As much as I worried about things getting stolen they never did. Not my wooden foldable patio furniture or my planters. My patio was right on the road and there was convenient parking right there. But the road was busy enough that you might not have had the privacy you needed for stealing. Over the last few years I’ve gotten really into making stuff with concrete, including planters. I almost promise that if you make a decent sized one out of concrete no one will steal it. All you need is a bucket to mix in, some concrete and something for a form. For the first little one I used a 4 liner (gallon) ice cream container and a yogurt container, for the second one I used a cheap laundry basket from the dollar store lined with a garbage bag for the outside and some cheap and cracking plastic planters filled with rocks, and for the last big (heavy) one I used a milk crate with some more cracking planters. Actually that’s what convinced me to go this route, these cheap planters only lasted a year or two before cracking apart and they were $3 each a bag of concrete is about $6, sold. It’s pretty self explanatory just make sure you weigh down the centre form and take it apart 12-24 hours after it’s poured so it’s not stuck permanently. Also if you want to make a drainage hole stick something between the two pots in the centre you can poke out later. I used tin foil around little rocks but you could use plastic lids, a ball of Saran Wrap almost anything, look through your garbage and recycling for ideas. Plus you’ll literally have it forever! If you want to save extra money you can just use whatever you have laying around like mismatched containers even strong boxes lined with heavy plastic bags, ugly but it works. 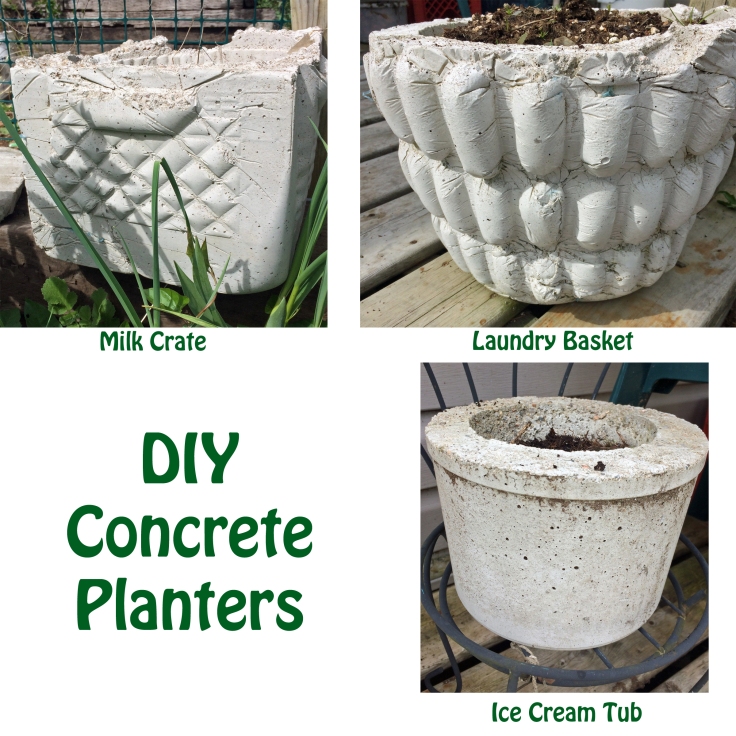 My next door, ground floor neighbours went a step further, they bought some concrete pavers and some landscaping cloth and put in a raised bed garden between the upper deck posts. When they sold their unit they pulled it all up and took it with them. They bought a few sods and it was like it was never there, plus I’m sure they re-installed it at their next home. Check out the cut away for how they did it. 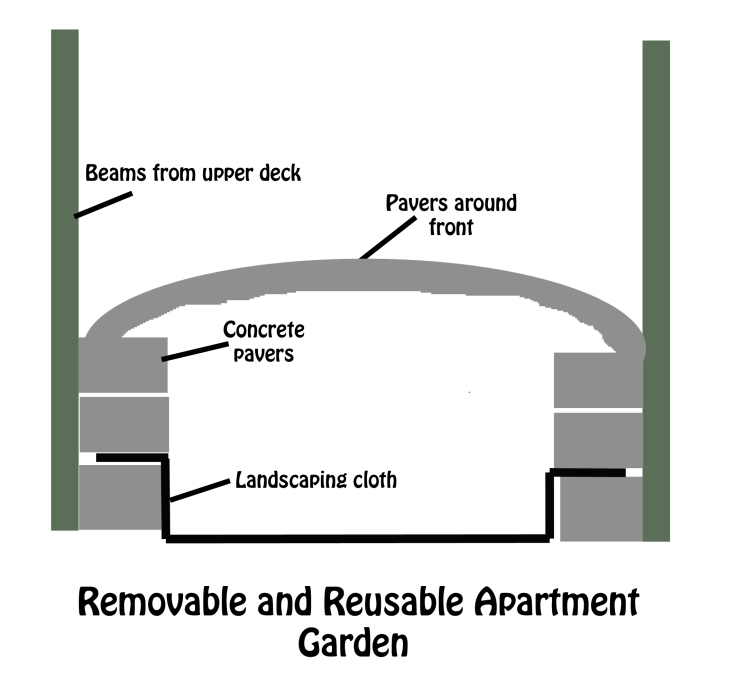 Really the sky is the limit here you could grow some spinach and lettuce and lots of it for sure but if you are dealing with limited space think about what you will really use and go for value. Plus if you can grow vertically all the better. Consider plants that grow in vines, like pole beans instead of bush and encourage them up as the vines start to grow. So instead of lettuces which take up a lot of space and goes for $1 a head maybe grow the tomatoes for your salad instead. Since your patio is your one and only outdoor space you probably also want it to be somewhat pretty. And any plant is prettier than looking at dirt so you might like to start with transplants  rather than seeds. But there is no reason to overpay at a fancy garden centre, check out the options at your local grocery or department store.

I used to grow tomatoes, basil, oregano, chives, mint, beans and peas in planters outdoors during the growing season in metal and wooden planters that wouldn’t crack when they froze in the winter which let me keep them there year round. If you are especially ambitious you can add fir bows or holly and decorate them for the holidays

What do you need and how do you get it?

The thing about apartment living is that certain things can just be harder. You have no designated ‘dirty’ space like a basement or a garage to store things, you probably don’t have access to a garden hose, garden tools or a place to store them. You’re not going to need a whole lot in the way of tools which is great because it sucks storing dirty tools in an apartment. All you really need is a decent little cute gardening shovel which you can store in a bag under your sink. But spend more than three dollars on it, go a model up at Walmart otherwise it’ll bend and break sooner than you would think possible.

Now dirt… this one is the hardest. Normally it’s not a great idea to grab some from the ground because you get a lot of weeds. Now even if you have to weed twice a week it will take you all of ten minuets and you’ll likely be out there so it’s not such a big deal. If there is a spot you can grab some at the edge of the property you can, just don’t dig up the gardens. You can grab a big bag at the grocery or department store on a few trips in a row depending on what you are doing. Look for something labeled, black earth, soil or ask for what is closest to regular dirt. You don’t want to buy composted manure (stinky), only potting soil (too light) or peat moss. The last option is if a big bag is too big if you go into the houseplants section they have little bags of potting soil for topping up house plants, that’ll do for smaller pots or if you can’t handle the bigger ones.

You obviously need planters and plants but you will also need some sort of fertilizer. You’ll be growing pretty intensively and you will deplete any nutrients in the soil pretty fast so you’ll need to keep adding more. I used to use miracle grow and add it to the water as directed. If you plan on growing climbing plants stakes, trellises or cages might be needed. I totally recommend the dollar store for that they tend to be smaller, cheaper and really, really cute!

What you don’t need is a watering can, a kettle or pot will do. Don’t worry about drainage too much since your pots probably have holes, if not be careful not to overwater. You can probably skip gloves, kneeling pads even bug spray!

Upkeep and other ideas

Not a whole lot here, water, weed, fertilize and harvest! If you want to experiment offer to help your friend in their garden in exchange for a handful of seeds or a few ‘extra’ transplants, you might want to check out my post on how to garden and landscape for cheap or if you’re starting up here are some really basic gardening tips. I have geared this post for veggies but of course you can grow flowers too. It’s nice to grow some like dahlias and lilies you can cut and take inside. Cut flowers you grew yourself make a great hostess gift!

If you are or have been an apartment gardener what plants did really well for you?

6 thoughts on “Apartment Gardening: A Start Up Guide”