I’m aware that this might not be popular. But it’s such a double standard! You would never, ever consider making the same-ish comment to a heavier person. So why is it okay to make comments to skinny people? If you’re reading this and you find yourself outraged because being skinny isn’t a really a problem, imagine if someone was either saying this sort of thing about your weight, your family member or something you’re insecure about.

So what about my weight, I really am skinny and like many others out there I struggle with my weight. My BMI is 18.2 just a hair below the lower health limit of 18.5. Being fit helps me keep my weight up by building some muscle on my frame and I also think it stimulates my appetite which I can struggle with. I also think that exercise helps me a lot with stress and working through my feelings, running is particularly good for that. During stressful bad times if I don’t take care of myself it can get a lot lower, like BMI in the high 16’s. During those times I can have other negative health effects from a low body weight like, anemia, dizziness, always feeling cold, worse insomnia and sometimes hair loss. It’s also something that I can be self conscious about.

But I’m not 21 anymore so my big nose, my ugly dry elbows, the odd pimple and my skinny frame is a part of me and I embrace it as much as possible now. It doesn’t bother me most of the time and it’s got plusses and minuses. I’d love a little more cushion for sitting down, bigger boobs in certain outfits, less prominent ribs especially on my chest and it’s discouraging to buy clothes in the kids department when the extra small won’t fit especially since I’m tall. But… those clothes are cheaper and tax free, most clothes shapes look good on me, no outfit (even tube tops, which I don’t wear) makes me look slutty, padded bras help a lot and support is never an issue when I’m running.

I try not to let people’s comments bother me and for the most part they don’t. I do make fun of my own skinniness a lot but the double standard irks me to no end. I’m sarcastic by nature so I usually have a comeback ready that I LITERALLY never say. So here they are:

Comment: Eat a sandwich! (This classic has literally been chanted at me from the neighbours house to mine).

Comment: Do you really think you should be running?

Comeback: Don’t you think you should start?

Comeback: Of being asked that? YES!

Comeback: I’m on the transplant list, just waiting for a donor  Hey, what are you doing next Thursday?

Comment: If you can’t gain weight that could be serious, you should see a doctor, it might be cancer?

Comeback: I’ve heard obesity and diabetes can be life threatening too. 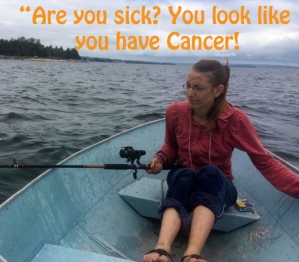 Comeback: No actually, I get my energy from the sun, wind and nuclear fussion, very sustainable.

More below. A lot of people assume that you have an eating disorder which for a small number of people might be the case. And they will yell anorexic at you or ‘reach out’ to help you. Even if that’s the case why do you think a skinny person automatically want’s to talk about or wants help with their medical condition from you? Is it okay for me to assume you eat your feelings of suggest over eater’s anonymous to you loudly if you’re really heavy? Should I assume that you are having issues with your mental health if you’re really fat? Perfect strangers have told me to eat a sandwich when I’m out in public supposedly out of concern. If I’m concerned about your health can I go take away your burger and fries or suggest you stop eating it?

Comeback: Oh, okay, I’m gland you mentioned that. I was starting to take it personally that you weren’t trying to sleep with me. Glad we cleared that up.

Comment: I guess you can be too skinny but you can never be to rich!

Comeback: Really, Well I’m both and I don’t think so!  Or. I don’t really know how you would know about either.

Comeback: Would you like me to turn sideways so you can’t see me?

Comeback: About half as much as you.

Comment: You’re so lucky! If I looked at that I would gain 5 pounds.

Comeback: Can you tell the guy that sells me lotto tickets, he hasn’t gotten the message yet.

It’s more complex than that too. Let me paint you a picture. Imagine if someone you loved very, very much was very, very overweight. Then imagine that they at least sometimes suffered from heart trouble, were loosing their eyesight to diabetes or had chronic high blood pressure and cholesterol levels. You would be worried about their weight right? Now let’s say this person tries to loose weight and makes progress but it’s a struggle and they could defiantly stand to loose a lot more. Now imagine if every where you went with that person people said things like,  “Oh my god you’re so fat, that can’t be healthy!” If every time you met someone new their first remark was, “How much do you weigh?” Or really any of the comments listed here. Well that’s pretty much how it is for me and my partner and family. Because when things are not going so great and my stress levels are higher I tend to struggle to keep weight on more I can get sick from it. People’s frankly rude comments are a constant reminder for me and people that love me that ill health is only a few pounds away and that concern can cause tension from time to time. For the record it’s something my doctor and I keep a close eye on and he’s more than happy with me where I am now and have been for 2+ years. If it dips below a certain point I add some meal shakes, lower my exercise and stay ahead of it. Imagine how that would feel if that was happening to you? So I ask you again why is it okay to make all of these comments just because I’m thin and not fat?

Comeback: Because my life is literally so perfect it’s the only thing I can think of!

Comeback: I really don’t have one BUT… Some of my Polish relatives survived Auschwitz and then emigrated to Canada so that’s how I got here. However since they were active in the resistance most of the others didn’t get the chance to starve to death, they were executed by firing squad.

Comeback: Maybe one day I’ll start breathing again but until then, I’m stuck like this.

Comeback: I know it’s like the tin man, scarecrow and lion all at the same time, no organs at all! My article in the Journal of American Medicine in coming out next week!

So I struggled a bit with pictures for this post rather than just putting pictures of me I added the comments I heard that day. I don’t really want to say these things but I do think them from time to time. If you are worried about someone’s weight either way and you decide you want to say something make sure it’s polite and private!

Update: (November 19, 2017) A few weeks ago a neighbour, not one we’re tight with, of mine saw me running home and came over to tell me that in his opinion I am way too thin, but not to take it personally. And, wait for it, I actually said something to him, politely, thinking back to this post. He reiterated about 6 times that I was really too thin and shouldn’t be running, he’s an arts teacher not a doctor in case you were wondering. I tried the “I’m happy with it” line, the “My doctor is fine with it” line and the “it’s genetics you’ve seen my mom and sister” line and at that point he was holding on to my upper arm and the conversation had dragged on for 5+ minutes. I was beyond irked but smiling at this point and I point blank told him “I know you would never cross the street to tell someone they are looking too fat lately, why is that.” His explanation was that so many people over indulge and that they just can’t help it, as if I can! Perhaps I stood up to him because it went on for so long, that he wasn’t taking the dozen hints I had handed out or maybe even because he has more than a few truly weird behaviours on display for the neighbourhood to see, but I did. And afterwards it felt like the right decision, but pretty much after I said it I ran away… Do you think I did the right thing????

Sometimes I feel like the term ‘body shaming’ has become a euphemism for fat shaming. Are rude comments about someone being skinny body shaming too? Is it okay to make these comments since it’s what a certain large portion of the population considers skinny to be attractive? Are skinny women the last people it is socially acceptable to be rude to?