I’m not a serious carb loader but before a big race, and my mom recently reminded me back in the day for swim trials I do indulge. Do I find it helps, ehhhh, maybe? Many, many years ago I took a metabolism course that required us to memorize every pathway in human metabolism so  I was aware that there was a special ‘thing’ to eating a lot of carbs before a race. I also knew that when I did carb load my races went well but almost all of my races do, which is to say I have pretty low standards for success. I decided that I should look into it and see/remember what carb loading was all about. Is it even worth it? Whether you carb load or not let’s dive into the science and find out what it’s all about. Also it helps you poop the right amount at the right time, and only the right time but we’ll get into that last. 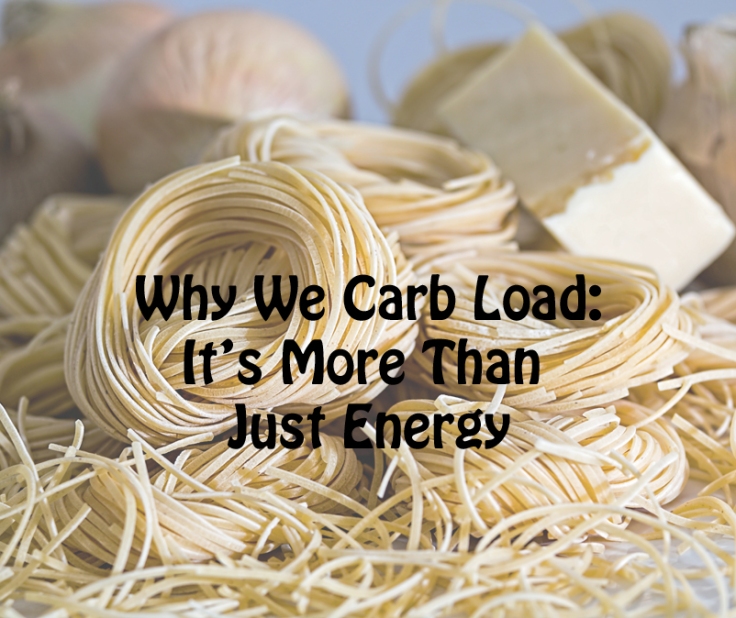 If you eat a tonne of carbs the day before your race you’ll have the best results, right? And that means you’ll go faster, harder or longer, right? Other than that we don’t know a whole lot about it. Do you need to do it? Probably yes for a marathon, maybe for a 10k and umm maybe not for a 5k? See we don’t know as much as we think we do, do we? Also how does it help? Does it work? How much does it help? Finally who needs to carb load? No matter what it’s a good excuse to eat lots of pasta, pizza or in my case garlic fingers right?

Let’s dive right into the science here and then distill that out into easy to understand takeaways from there. It all comes down to how your muscles work to get you over that finish line and there are a few steps. Muscles contract making you go and that uses a tiny molecule called adenosine triphosphate (ATP for short) and that’s it. ATP is necessary for every single contraction you’re going to put your muscles through on race day. ATP can be made from virtually any input in the body sugars (carbs), fats and proteins. All of these sources work well and are processed pretty darn efficiently. Sometimes we’re told that muscles burn sugars (from carbs) and then they move onto fat, well that’s not really true at least not entirely. Sometimes we’re told things like that switch over from glucose (sugar) to fat is responsible for the wall you sometimes hit and that this has to do with VO2 max which drops at this point. Well that’s not entirely true it’s actually just such an oversimplification that it’s basically not all that true any more. Here are the flaws with that logic:

But the logic isn’t totally flawed either:

So what happens when you participate in an endurance event? Well first your body uses most of the the ATP in your muscles up and that happens very fast. Notice I said mostly uses up, your body will not use it’s very last molecule of any of these types. Rather the level of each will drop to a low level but as long as you’re living it’s not totally used up. Okay got that? Keep that in mind! More is being made in the muscles but now we need another sourse and the next one is glucose stored in your blood. Your body amps up a process called glycolysis to make more ATP for your muscles and that get’s depleted pretty quickly too in a matter of minutes. As those blood glucose levels get low your body amps up that rate glycogen (there’s a big store of that in the liver) get’s liberated as glucose into the blood stream so you can make more ATP for those muscles and keep you going. But eventually those glycogen levels start to get low too so it’s time to get you some more energy so as those levels get lowish but not super low, you body ramps up that rate it releases fat for more energy in the form of ketone bodies into you’re blood so you can keep on making that ATP. When fatty acid metabolism takes over as the main course we call that anaerobic exercise threshold, and we usually see a decline in VO2 max right around here.

Ok got all that? Good! None of these processes are ever really fully ‘on or off’ but rather up for down like the volume on a stereo but not like the power button getting turned off completely. What we’re doing when we’re carb loading is making sure that liver glycogen tank is as full as it possibly can be on race day. As you can see from the graphic we’re aiming for that fed state, high blood glucose and high glycogen stores. Eating a lot of carbs is sort of a way to ‘trick’ the body into storing glycogen in the liver. But know that I hesitate to use the word trick. You eat lots of carbs and then lots of it gets converted into blood glucose and it’s getting stored in the liver since you have more than you need. It’s also getting stored as fat but that process is slow, slower than the other two at least and so you’re liver might even reach levels of glycogen that are even way higher than they would normally be. And that right there is why we carb load!

As and endurance athlete you want every advantage you can get right? And there is a testable measurable advantage when you carb load before. But training smart and hard is by far and way the best thing you can do to ‘mess’ with all this stuff for race day! So what does training hard, say on a long slow weekend run  or speed work do?

How do you carb load right?

If you want to get all team serious about this you can, there is a formula! That is…  get your calculators ready, consumes 12 g of carbohydrate per kilogram of lean mass in the 24 hours before the race. This should amount to 70% of total calories consumed. This has shown a 90% increase in glycogen storage compared to the day before carb loading. This results in glycogen storage levels the same or higher than the results achieved with other 2 day – 6 day carb loading programs. There is no reason to carb load unless you’ll be out there for less than 90 minutes but if you want to fill your boots. This study used complex carbs like veggies and whole grains but…

Why else do we carb load

Most of us use the day before a race as an excuse to eat things like white flour in the form of pasta, pizza and the like. That might not be a bad thing though and it’s what I do, I’m not really die hard against white flour in life either btw. The other reasons we carb load come into effect now. The thing is for most people white flour is easy to digest and it doesn’t contain a whole lot of fibre like it’s healthier counter parts. That means it moves through you quickly and usually all at once. That means it helps with getting your pre-race poo done before hand and minimizes your chances of needing the loo mid way. And we all know how important that is!

Lot’s of us have a go to carb heavy meal or day long diet we go to each time. That can also go a long way in calming race day nerves. We all have out pre-race rituals and it’s important not to underestimate the power of those routines in race day performance either. Maybe you cook it yourself or order in but having a carb heavy meal as you go to can also help settle you and even help you sleep!

So now you know all the reasons and the science of why we carb load before a race. Do you do it and most importantly what’s your go to carb loading meal?

5 thoughts on “Why We Carb Load: It’s More Than Just Energy”