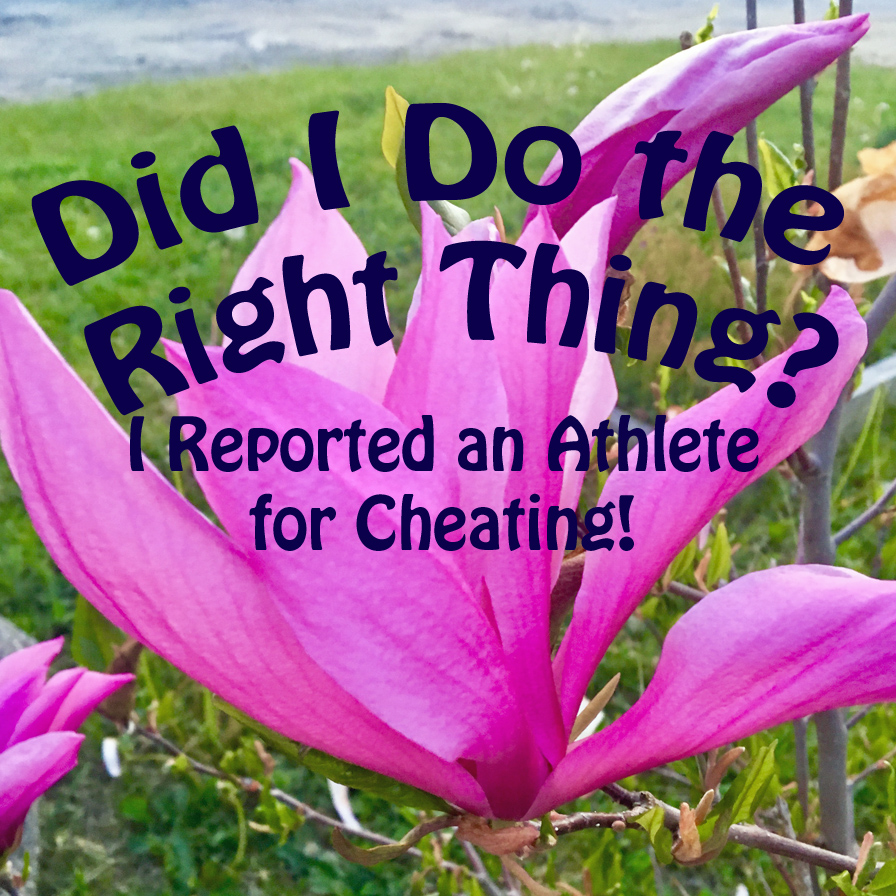 Part of the reason I wrote a post about race bibs a few weeks ago was in preparation for this post. You can tell from the title of this post what I decided to do but I did have the opportunity to think about it, which I did first. But I ultimately decided to report to the race officials. But there is a chance I didn’t do the right thing, especially since a child might have been affected too. So here’s what went down. Let me know do you think I did the right thing? I’m ready to hear it! 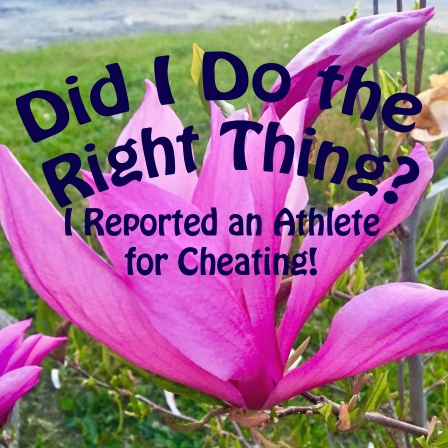 I also realized that I really don’t have relevant pictures for this one. So enjoy some random pictures of the garbage box I built. Yup I’m pretty proud of it! Also even though I had video of the two it would be wrong to shame people like that on the internet. At least I don’t want to do it!

Let me set the stage for you when honey leaves the house for any length of time I usually take on a project that he’d interfere in too much if he knew about it as it happened and that day he went on a 16 hour shark fishing tour. Actually he went as a shark wrangler on someone else tour but I digress. I’ve also promised not to paint anything else so many times he probably remembers it now so I was building a garbage box in the driveway in a bikini top as one does in August.

Our house is one the main road and the most popular beach in our area. It’s the beach where rum runners transitions, there are lifeguards and on a busy summer weekend day there are usually a few thousand people there. That day was just like that but I had realized there was more noise then usual and the cheering was unusual so I figured something was going on. Our driveway connects the road physically to the trail only because the person behind us has that portion open but it’s not a legal connection between the two and we’ve been having some issues with that this year. In fact we have installed video surveillance at our house because of it. We don’t keep it up perfectly because I have a truck, our neighbors don’t contribute to it and the better condition it’s in the bigger the invitation. Two driveways on either side of us are legal trail connections one is blocked off as the same owner owns the parcel on the other side too and the other is widely used. I heard cheering at the beach and commotion on the trail behind me so I figured adding in the water it might be a triathlon. Not a big one, I would have known about that but something smaller.

So I was sitting there in my bikini hand sawing a 2×8 as one does when a lady and probably her daughter walked up beside me. I asked them “are you in a race?” Since they were both wearing bibs and the little girl looked really uncomfortable. She said “yeah” in a really put off tone. To which I replied “this isn’t a public road. Just so you know.” She told me “she lived up there and she was allowed here.” And pulled on the child’s arm. I replied “No one lives up there, there are no houses up there,” because no one lives up there and there are no houses up there but I didn’t stop here from heading through past the blockade. I also pointed out that the next one over (by name) was public. The little girl said “I told you it was the next one” (but she also used the name of the road). Once she was past she muttered something at me which I think sounded like witch or maybe she was just itchy from a bug bite we’ll never know for sure. She just breezed past both sets of ‘private property’ and ‘no trespassing’ signs.

Here’s the thing we don’t stop walkers or cyclists from using our driveway during the day. But we do tell the ones with skinny tiers to be careful. We don’t really want people there at night but what are we going to do from the house? What got me was I’m going to have to do something about this because we can’t have races running through here next year we just don’t have insurance for that!

How I realized what what went down

Now I was googling what race it might be outside and I’d put a shirt on because company was set to come, but get this it never did. I did listen and watch carefully but nothing, no one and all that lemonade went to waste, joking but that would have been very nice of me. I could hear a large ruckus at the next road over though. I walked into the front yard to get a view of the road and lots of cyclist were passing by toward the beach and lots of runners were headed past our driveway to the next road over. That’s when I realized what was happening, these two has cut the course at a kids triathlon! Based on the noise locations and times these two probably weren’t in first place and they had just taken a cool 800 m off the run portion.

Then I got to thinking

This must be some tiny fun race with photocopied bibs, no online presence, no online registration and chances were these kids weren’t trying to qualify for Kona. It’s just a tiny race let it go. But then I got to thinking “what a terrible thing to teach a child.” It sends the following messages:

I could tell the little girl knew what was up and didn’t want any part of it but it was her gown-up’s idea. She knew she was doing something wrong and she didn’t like it but realistically she didn’t have a choice. If that was her mom, or even if it wasn’t, that person was being the worst role model for her. If that little girl knew where she was supposed to be than that lady certainly did too.

So what did I do

Well I thought about it. I sat on the porch and thought about it, got some lemonade and thought about (no really I did). Then I tried to cut some more wood and forget about it, but I couldn’t. I remembered the gown-up’s bib number and I was pretty sure about the little girl’s too. What was I going to say? What would I do if she confronted me after? I also remembered that video surveillance. After about 15 minutes of thinking I walked down the drive way, past lots of people were streaming out of that next driveway, now I was mad! I waked right up to the organizers at the makeshift table in the road and declared that “Competitor 123 cut the course and displayed some truly un-stportsman-like behavior in the process.” The organizer’s face dropped like a stone and she gave me a genuine seeming “REALLY? Thank you so much for letting me know!” Then her head turned and she looked at the  woman standing 2 people over and 6 feet away at the culprit, I’d guess that she heard everything. As I waked away I declared that “she picked the wrong driveway, I also do triathlons.” Full disclosure after I said that is when I noticed her standing right there. There’s a pretty good chance if I saw her first I might have chickened out. I decided not to give the girl’s bib number but if the race director was paying attention along the way she might have known they likely traveled the course together.

So did I do the right thing? I haven’t had any regrets since even though I thought about it a lot in the last 6 weeks. I’m glad I took the time to think about it before I did it because when I make a spur of the moment decision I tend to regret it after. What would you do in this situation? Have you ever reported an athlete?

PS this post is going live as I’m running the Valley Harvest 10k with my stepdad and trainee! If you leave a comment I’ll see it and pass it on to him. It’s his very first 10k ever!

3 thoughts on “Did I Do the Right Thing Reporting an Athlete?”