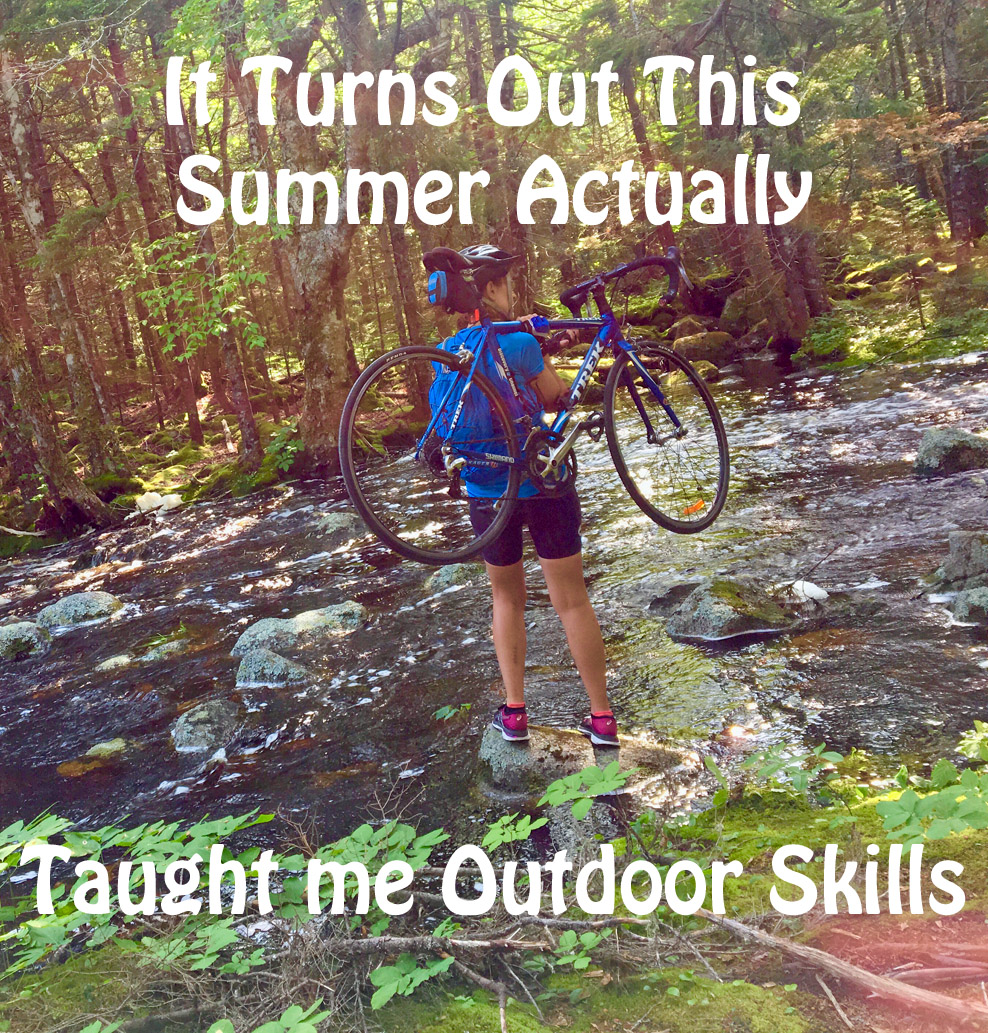 Don’t get it twisted not like a lot, a lot and I’m still never going camping so feel free to leave me off that invite list! Back in my grad school days the entire DAL biology department used to joke, is it a joke though?, that in the event of an apocalyptic event we should all come to honey’s house and he could protect us and feed us while re all re-built the biological sciences. Which is to say honey is pretty outdoorsy. He hunts, shark fishes (and regular fishes), seems impervious to cold, used to race dirt bikes, he even swears for a time while he was living in the bush he could  smell the animals. All his kids even the girl are outdoorsy too they had a boat as a babysitter while he dove, can skin game, sleep in the woods on purpose and even checked their rabbit snare lines daily after school. Which is to say I stick out like a sore thumb in this family. When the boys were very little they would come check on me if they saw me in the brush at the end of the yard. 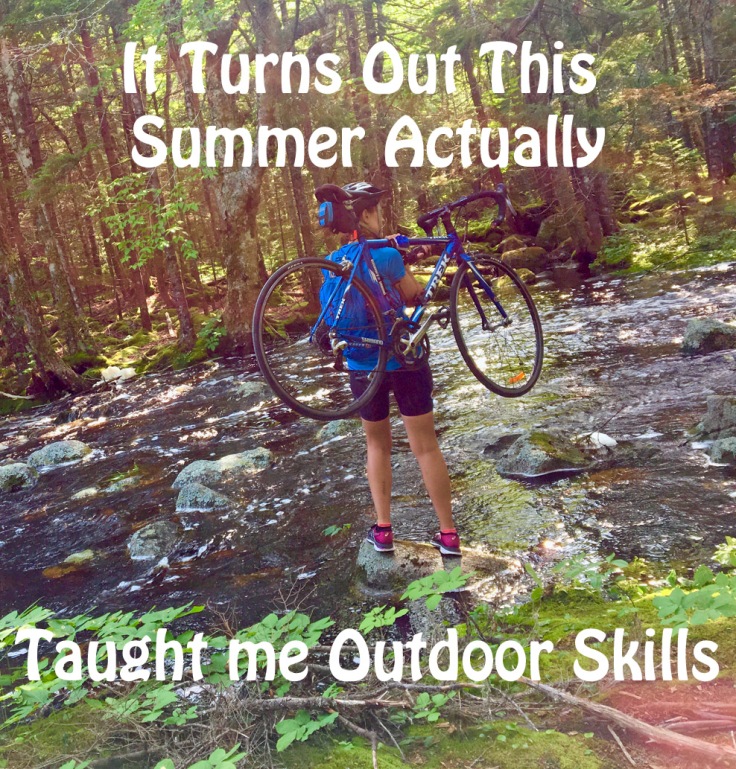 My lack of outdoor skills has even become a running joke in the family. Should I ever decide to try it was assumed search and rescue crews would find me 20 feet into the woods, sitting next to a tree having cried myself to death. They weren’t wrong. But I was a girl guide and we camped as kids, how did this happen? In both cases it was my mom’s fault she took us camping in a 40 ft motor home with a furnace, but girl guides right? Yeah my mom was my girl guide leader too so we never learned how to tie bowlines (ps I had to google that to spell it) but I can bake a cake in a cardboard box with tinfoil. Snakes freak me out, bugs with stingers freak me out as do ‘weather events’ and generally I’m against winter. Outdoors includes sidewalks, public parks and the part of the driveway right next to the house to me. I exaggerate here but not like a whole lot.

But this year I trained for a triathlon and I had to do all sorts of outdoorsy stuff starting in March, gross! I had too run in the cold and the snow, my eyelids froze shut and open at the same time, that was a great day, not! I had a cold at that point and on one ill fated day my left nostril froze shut too, that was unpleasant. But on a related note that month I learned to blow a snot rocket so that’s something. I swam in freezing cold water and got leeches between my toes. Okay not freezing cold with ice but 9 degrees Celsius is still pretty cold and the leech turned out to be mostly funny. I also covered lots of new ground on my bike and maybe once or twice impressed honey, Mr. Outdoors himself with my newfound skillz, again not a lot a lot, but some. So here’s what I learned.

Not life changing I’ll admit that but should something happen I know which direction to head for help. We have the old road, the highway and the trail and they criss cross each other multiple times. Usually when I go on my mountain bike in the past I just park the car at the trail head and drive away from civilization. This summer took me further than I’ve ever been on out trail system and I can now tell you how it relates to the old road and they highway.

Potential Usefulness: Low to not at all. Potentially if something happened and I needed help fast I now know which way to head. But provided I had cell service at the time google maps also could tell me this too. If it did happen now I would still use google maps just to be sure.

I forage for mushrooms now, well one mushroom

This one might have impressed honey the most. One day while on an early morning run I bent over to tie my shoe there was a chanterelle mushroom growing right in the street. It’s not a busy street. I glanced around and there was more. I took one home to honey for conformation and he taught me how to pick them so they’d grow back and I wouldn’t break the law. But I went back every few weeks and picked them, like 5 pounds worth over the summer and fall. There are some in my fridge right now. I also know where there is a really, really big mushroom but I don’t know if it’s edible. It’ll either see you through winter or make you forget it entirely so I just left it be. 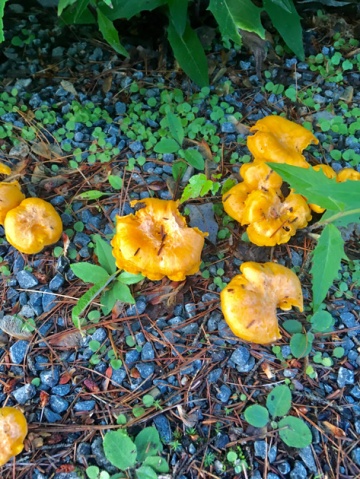 Potential Usefulness: Actually pretty high. I sautéed a bunch and froze them for mushroom risotto. Fancy pants right? Would I actually buy expensive chanterelles not that often but I’ll eat em if I got em!

I know about snakes, well one snake

While biking on the trail this summer I encountered a snake and I took a picture of it. I thought it was weird that it was still there when I got back until I looked more closely at the picture and it was dead. Sad face. It had little blood dribbles next to it’s head. I showed honey and he told me it was a big one and a brown snake and they bite. This specific snake didn’t bite but I learned about brown snakes. Abort, abort! Thankfully none of our snakes are poisonous but over all still a no thank you!

Potential Usefulness: Not that high, I’m not known to go around poking snakes and it’s very unlikely that I’ll start. However if one does bite me expect 4 dramatic tears.

I covered way more ground on my bike this year that is also potentially reachable by car. One day honey was like I think it’s time to strap a jet pulse engine to an RC boat and let it rip. He needed a lake that was secluded, not to windy and he’s not one for a long walk. He was surprised when I exclaimed I had just the lake for him. And it turned out to be perfect, no houses unless you count that loaner guy on the far side with an airstream and no driveway. Unfortunately or maybe not the jet engine wouldn’t start that day but when it does…

Potential Usefulness: This is actually pretty useful at out house or for any evidence dumping needs I might have in the future. Maybe that’s why the guy in the airstream is here. I actually discovered lots of cool spots this summer.

After the boat didn’t work we found a spot with 15 flavors of fro-yo. I can’t do ice cream so I was really excited. Technically I drove my air conditioned SUV there and it’s not an outdoor skill but pineapple fro-yo is amazing!

I can change a bike tire, if conditions are ideal (untested)

Terrible confession time up until this year I didn’t really know what was inside a bike tire. Sure I knew there were tubes in there after conversations with the bike shop guy but I never confirmed it for myself. Second terrible confession I didn’t learn to ride without training wheels until my friend’s dad finally had enough. I think I was 12. With no dad to help me and youtube wasn’t a thing yet I let that bike shop guy just handle almost all of my repairs. He’s awesome, honest and cheap-ish. He would say I needed a new tube and I would just smile, nod and agree that the tubes didn’t seem up to snuff lately. But the thought of a flat on race day finally and I finally got honey to teach me. He changed the first one and I watched then I changed the second one in the living room with almost no help. Now that I know how to change a tube I bought spares.

Potential Usefulness: This will come in handy at some point and at the best possible time.

I mentioned that honey is a hunter and whether you’re cool with that or not I totally get it and respect your opinion. Sure he got his deer last year, like that’s hard I got one and I wasn’t even trying, but he shot a lot of rabbits too, like a lot a lot. To the point that I was kinda impressed it was very manly provider after all. But also to the point that his rubber boots and my porch were covered in blood which would have been great at Halloween but… not so much at Christmas. A crap ton of bunnies crossed my path this summer and my bell, my voice screaming at them had little effect on getting them to move. When I almost hit them they moved but a lot of them ran a scattered panic pattern in front of my bike before finally darting back off into the woods. So I’m not quite as impressed as I once was.

Potential Usefulness: Not that high but I did realize even though the tortoise won the race with the hare you might still have to break for them.

I had some issues in that big race with my bike chain but they paled in comparison to what happened one night time bike ride. Truth be told honey and I were in the long slow process of making up after a ‘disagreement’ so I decided a long bike ride was in order. Anyway I triple wrapped my chain around my pedal and I tried to get it unwrapped for over half an hour on the trail to no avail. So it was time to walk pushing the bike. Normally I would have called for a pick-up but I was all crappy and moody that day so I decided to rescue myself. Wrong move by the way. I was covered in grease, I still have residue in the scratches in my phone case and truthfully I thought someone would pick me up in my small town as soon as I reached the road. Well no one did that saturday night. Anyway with everything and a bad horsefly bite it got dark and I realized that no one would be able to tell if I was crying so I just let it rip. I walked about 7 km that night and in the last km a nice lady with a tiny car from out of town did offer me a drive but at that point I was pretty committed to walking home. Honey was checking in on my late arrival too.

Potential Usefulness: Believe it or not this is actually more useful than you’d think to me. It tuns out that walking a bike home is a much slower process than I would have ever imagined at about 14 minuets per km. Chances are at some point I’ll have to push my bike again so it’s good to know exactly how long that takes. This time I had street lights, cell service and next time I might not be so lucky. Chances are I’ll be crying that time too, broken bikes suck!

Have you learned any new outdoor skills lately. The thing is a lot of you are going to be like, “girl please,” In both directions. Some of you are never, ever going to eat something you found in the woods and the other half are not impressed at all! Which side of the fence are you on?