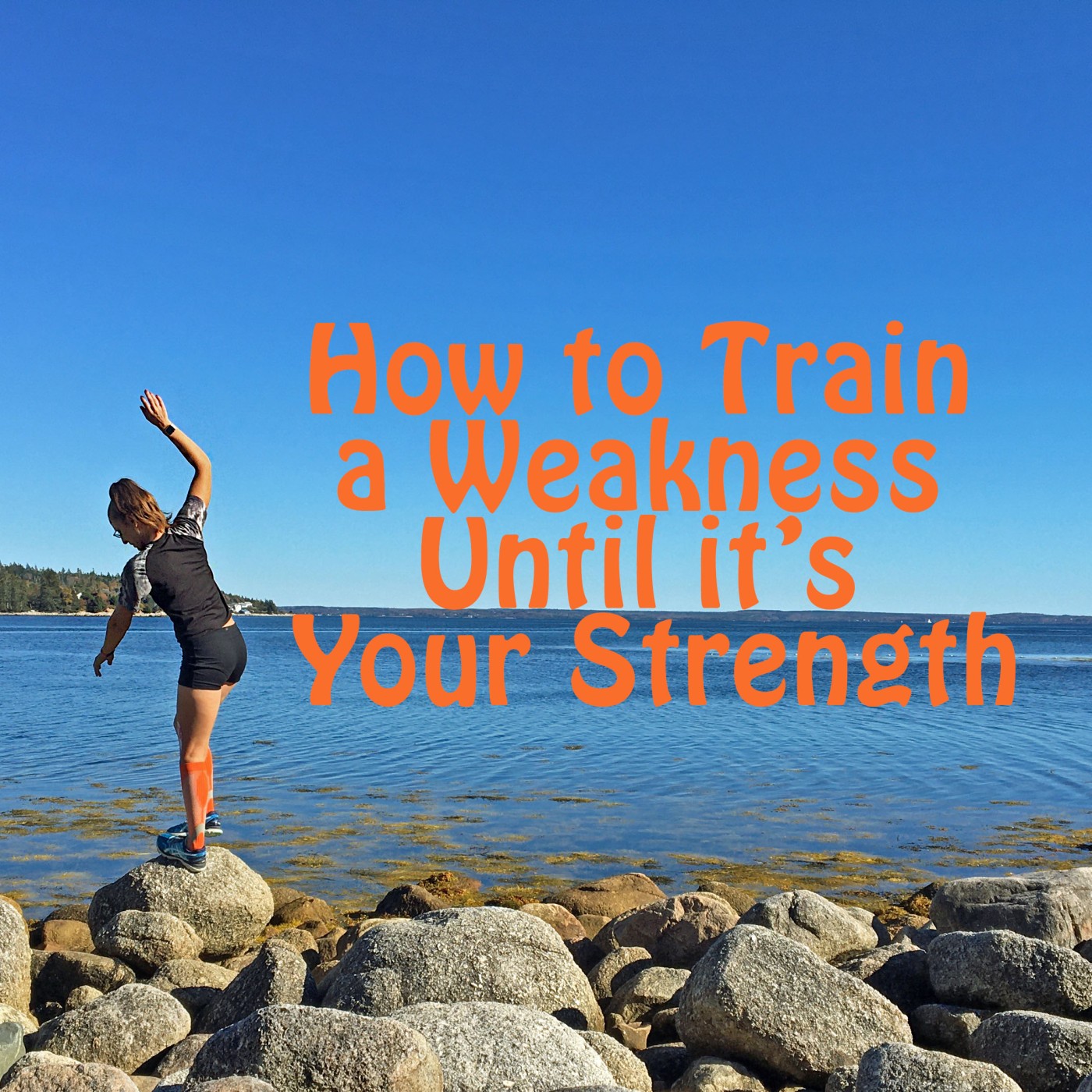 No two people are exactly alike and that’s sort of what keeps the world interesting. But that also means we don’t necessarily have the same natural ability to do any task. So depending on what activity you’re trying for the first time it may go great or suck balls. It’s easy to ignore a weakness but the better idea is training it until its one of your strengths! There are lots of reasons why that might be, which we’ll get into, but in no way does that mean you’re doomed. It’s easy to give up and think you’re doomed to suck forever but in fairly short order you can actually train that weakness until it’s a strength. Give yourself about three months and 10 minuets a day and almost any weakness can be vanquished!

Why we have ‘weaknesses’

Genetics right? Yeah that’s a huge factor but remember biologists have a saying that your genes load the gun but the world you’re in presses the trigger. In my mind (as a doctor of biology) when it comes to having a particular weakness the environment is more important. We might be talking weak arms, painful running or a propensity towards shin splints. You might get asked not to come back to little league (raises hand) or sink like a stone in swimming lessons but none of those things mean you can’t play a certain sport. You might be afraid of open water deeper than your head but even you can do a triathlon. So take note weaknesses we have can be physical or mental.

So if it’s not mostly genetics how does your environment come into play. Well in a lot of different ways one starts with mental stuff you’ve hung onto from childhood. You might have a fear of snakes or bugs which one could argue is somewhat due to evolution but it might also come from how your parents either reacted to things like that or whether you were exposed to them at all. But if your parents had snakes which they fed live rodents to you might not be squeamish about those things at all. Here’s one I have, my mom was a crazy nervous winter driver and the moment a single snowflake fell the “get home now, you’re legally driving my car” phone calls started. Fast forward (I’m old now) 20 years later and I’m still a nervous winter driver even though I’ve never so much have slid into a ditch in that long. So our mental barriers can be directly traced to how we were raised.

What often happens as well is our lack of exposure to things. Maybe like me you didn’t really play any sports at all and maybe you never ever exercised on purpose the whole time you were growing up. Why then would you expect to do as well as someone (anyone) else at your first adult ballet class or work softball game? It might even go off the rails completely and that’s okay! We have a certain amount of muscle memory that stays with us a lot longer than we think it does too. So while tennis, golf and pole dancing all turned out to be pretty serious weakness for adult me other things went way better than expected. That week of canoeing at bible camp meant I took to paddle boarding int he first 10 minuets. Believe it or not in the half credit physical education course I had to take in high school I actually didn’t suck at baseball. Maybe that summer of poor performance in little league did pay off. I also have a pretty hard time building muscle to this day.

Contrast that with honey’s kids who were incredibly active. One of the go too punishments was helping Dad at work to pay something back. They rode their bikes until they broke over and over and honestly fought with each other a lot. Now that they are adults not one of them exercises on purpose but they can all throw hard, lift heavy and have abs. They also are all weirdly co-ordinated and put on muscle just looking at weights. Given the things they were exposed to this all makes sense. Think about how you spent your time growing up. If you were a super sporty child you probably haven’t lost all of that no matter how long it’s been. If you don’t have a strong background in movement give yourself a break and some extra time to hit your stride.

How to embrace a weakness

No matter how amazing you are overall we all have some weaknesses. Some of those are small and some are pretty big, some are mental and some are physical. The first step is to try, and try again and then if necessary accept that you kinda suck at whatever you are trying to do like say actually hitting the tennis ball. It might help you to have a think about why that might be. If you’ve never played a sport or really done anything that requires hand eye coordination then why would you rock at this right away? If you can identify a reason then you don’t feel so bad about it. If you can’t think of a reason lets just go ahead and blame genetics then, it really doesn’t matter but acknowledging that you suck is always the first step.

It doesn’t make you less of a person or less accomplished overall to admit that you’re not great at certain things. To this day I am less than average in the fields of parallel parking, brushing my teeth neatly and you know keeping up with housework in general. But.. I’ve actively worked at and am probably above average now at reversing, keeping up on my skin care and generally being pretty organized. Those are all weaknesses of my past but no more. Even if everyone around you is weirdly strong and can seemingly pick anything up and you can’t lift a single bag of concrete that’s okay. So when stuff like this happens to you stop with the negative self talk that spirals into other areas and keep it to “I pretty much suck at this.” That’s enough.

How to ‘fix’ a weakness

By now you’ve accepted that there is something you’re not that great at. If you want you can be done and just leave it at that. But should you decide that a given weakness is something you want to work on you can be better at it in no time. The next step is to commit to working on it. So if you realize that your issue is a lack of upper body strength well then look up a quick upper body workout you can do while you watch tv. Then you need to resolve that in 100 days you’ll get better and do the work and make a plan to get there. Devote at least 10 minuets a day to mastering this new skill. That could be as simple to doing as many push ups as you can every second day. I choose 100 days because it’s long enough to put some hours in but not really that long a commitment if you think about it. For example most non-runners could be 10k ready in that time running just three days a week. If I wanted to get better at hitting tennis balls I could go practice on a ball machine once a week. After 15 hour long sessions I recon that I’d connect more than your average gal.

For most things 100 days and 1000 minutes is actually enough to get better than average at something isn’t that crazy? Three months is generally regarded as the amount of time it takes to form a new habit so once this time period comes and goes if you want it should be pretty easy to keep it up. This also applies to psychological hang ups as well. It’s about an hour a week which could be even a therapy session a week. You can also do your own form of exposure therapy on your own. Just take one baby step after another (maybe with a supportive friend by your side) each and every week and it won’t take long to break down your mental barriers like swimming in deep dark water.

When it comes to working on your particular weakness you might have to get creative but that’s okay. No one knows better than you how to tackle a particular short coming and make a plan to fix it. You might have to turn to the internet, advice from friends and family or some introspection to figure it out. But you can do it! Even if you’re not totally and expert by the end of your 100 days you will have gone a long way to making your weakness a strength.

Sure you might never be on the olympic podium for your weakest points or ever have a pet tarantula. However you can not embarrass yourself at the company softball game next year. It might just take a while and a little bit of work. What’s the biggest weakness you currently have or have moved past? Leave it in the comments below!

PS: I successfully parallel parked the 18.5 foot work truck today in only a 27 foot spot so there’s hope for everyone!