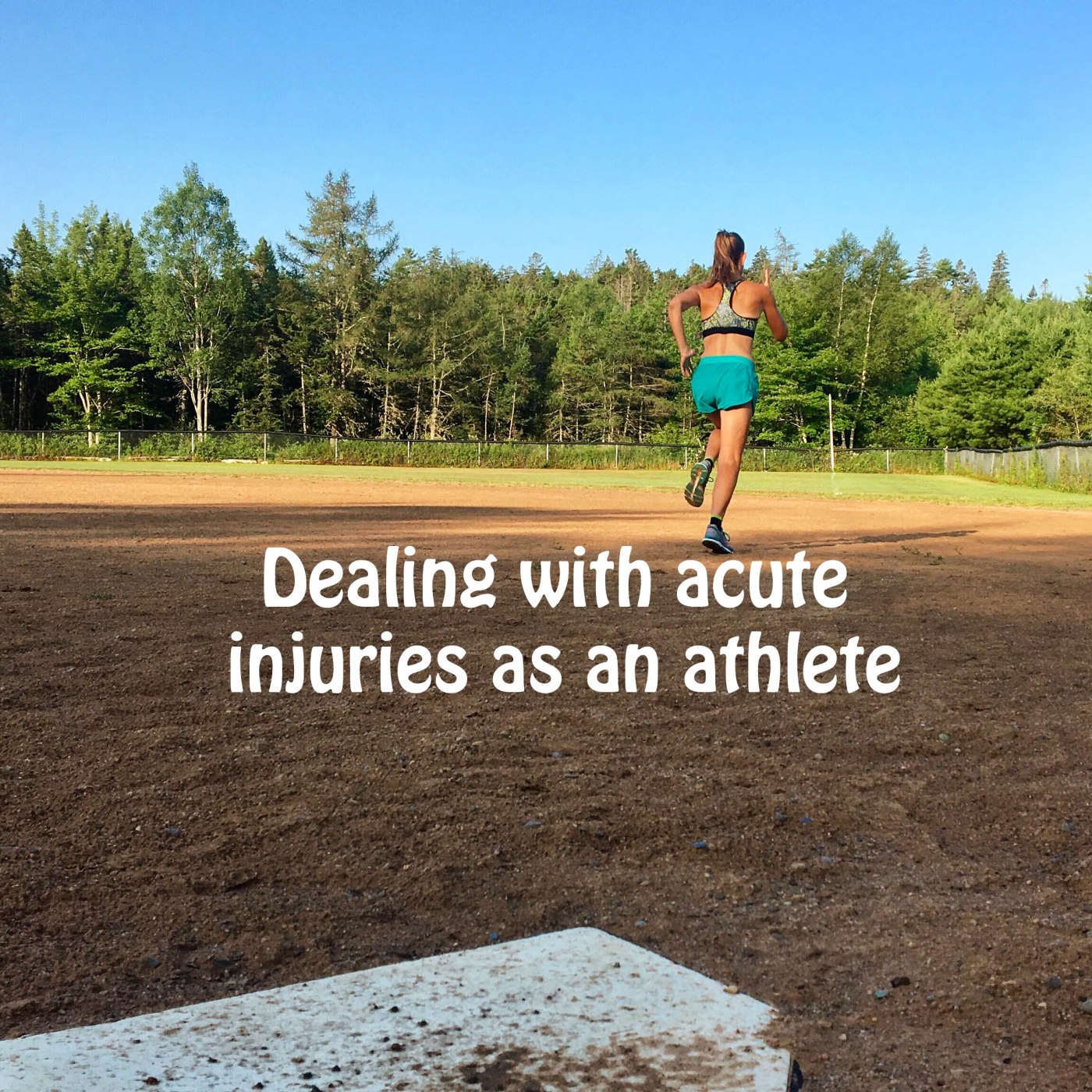 Unfortunately even if we take our training super seriously we still have to live our lives and that means sometimes we do things that make us hurt ourselves. That’s the boat I’m in at the moment. I’m not really sure how it happened but it has again. I’d say once a year or so I end up acutely injured and that takes me away from running. This time it happens to be a very sprained and swollen knee. I’ve been busy at work already this year gardening and I’ve pushed a few floats in but at the time I was shoveling, I had bent down for a while clearing the ground and when I stood up there was a sharp pain in my right knee.

No matter how careful we are life sometimes happens and you need to know how to deal with it when it does. The good news is that as an athlete you already have the tools to deal with it way better than your average Joe, so yeah you! But… your injury will probably make you WAY more anxious than average too. But when it happens here’s how you deal with the injury and your training schedule!

What is an acute injury

Two summers (or was it three now…) I was training for a race and also putting in floats. I was walking across a customer’s lawn that I knew was prone to deep gofer holes. Even though I knew that I still managed to fall into one and twist my ‘bad’ knee so I knew that was an acute injury. This year’s circumstances would normally be harder to tell because I really didn’t have an oh crap injury moment. Here’s the thing though I haven’t been running enough or on the flip side gardening enough yet this year to have an overuse issue either way. Think about your circumstances and decide (perhaps with medical help) what sort of injury you have.

There is some overlap here on how to treat an overuse injury vs an acute injury but that makes sense right?

The issue comes in here for athletes is that you might not feel like you can rest as you might have a training schedule to to stick to. I’ll go a step further and tell you to rest dramatically. Have your people bring you drinks, elevate ice and rest your injured part on a satin pillow. Not only because being dramatic is a good bit of fun but because the more complete the rest the faster you heal. This time around for two days I was super swollen and mostly stayed off my leg, I had a couple of driving around days with some napping in the back mixed in for good measure too. Then by the third day I was definitely on the mend and the couch and by day four my limp was totally gone. If you end up taking a whole week off training (which is almost always warranted) just take the average of the week you missed and the week that is scheduled and do that when you return.

Level up your treatment

Just say you have twisted your ankle or gotten a minor sprain. Under normal circumstances you might do very little to treat that and it would get better on it’s own. One thing that is quite nice is that as athletes we do tend to have a lot of options to throw at an injury on hand. If you’re in a rush to get back to your sport you should treat it as if it is more serious than it is. So ice it as much as you possibly can, take NSAIDs, immobilize it with a wrap or a brace and even use crutches when it’s very swollen if that’s an option. Do some foam rolling and an epsom salt soak. If you already have a relationship with a physiotherapist or sports medicine professional tap on them too even if it’s minor. This might feel silly and unessesary but here’s the great thing with an acute injury it will heal very fast compared to the six week minimum of an overuse injury. So giving recovery your all really could pay off sooner.

Wear whatever you need to to take care of it

My mom once got a really bad sprain on her ankle and the woman was determined to wear heals while she recovered. Seemed crazy to me at the time, seems crazy to me now. As an athlete you probably already have pretty new state of the art footwear on hand that will give you the support you need while you’re healing in your training shoes. A new pair of sneakers is almost always your best bet. Put them on from the moment your feet hit the floor until you go to bed at night. Beyond shoes is wearing something you normally wouldn’t or not will help you recover faster then do it, people will understand! If you’re in a sling there is no reason what so ever to take it off to be professional. Sort of a side note here I think my three year old summer work boots might be part of the problem for me. I’ve put them back on in the last two weeks or so and thinking back I feel like there might be a bit of a pattern of joint pain more often over the last year or so when I’m wearing them. Whether they are to blame or not they are dead to me now and will be replaced right away.

Here’s a dirty little secret even if we want to be the best runner, cyclist or cricket player that we can possibly be and train for that, a lot of what we are doing in training is just increasing our fitness levels. Now it’s not always possible to switch to another activity and not every one is created equally. For example an injured runner probably shouldn’t replace their training with walking but they might be able to cycle or swim while still healing. If you can just swap out one activity for another do that and just match the training intensity and time and it will almost be as if you’ve never been injured at all when you return to training. That’s because there is a secret in training most of that plan is just boosting your overall level of fitness rather than skill level day to day.

Not all acute injures can be neutral to your training and sometimes can even derail your plans altogether. If you have a signigigant injury you might have to let go of time goals or even drop down a distance. Sometimes the worst happens too. If you break your femur for example your iron man might have to wait until next year. It is heart breaking but you don’t ever want to push through and make something temporary into your new best friend for years. If you’ve been an athlete for years already you know that putting something off until next year is never the end of the world!

Getting an injury, overuse or acute SUCKS and unfortunately they both happen. I think in most cases athletes would rather have an acute injury over an overuse injury of similar severity as they are usually a lot more predictable. Is that true for you? Take some comfort that this one at least could be behind you faster than you’d think. What’s your best trick or tip for dealing with an acute injury as an athlete? Leave it in the comments below!