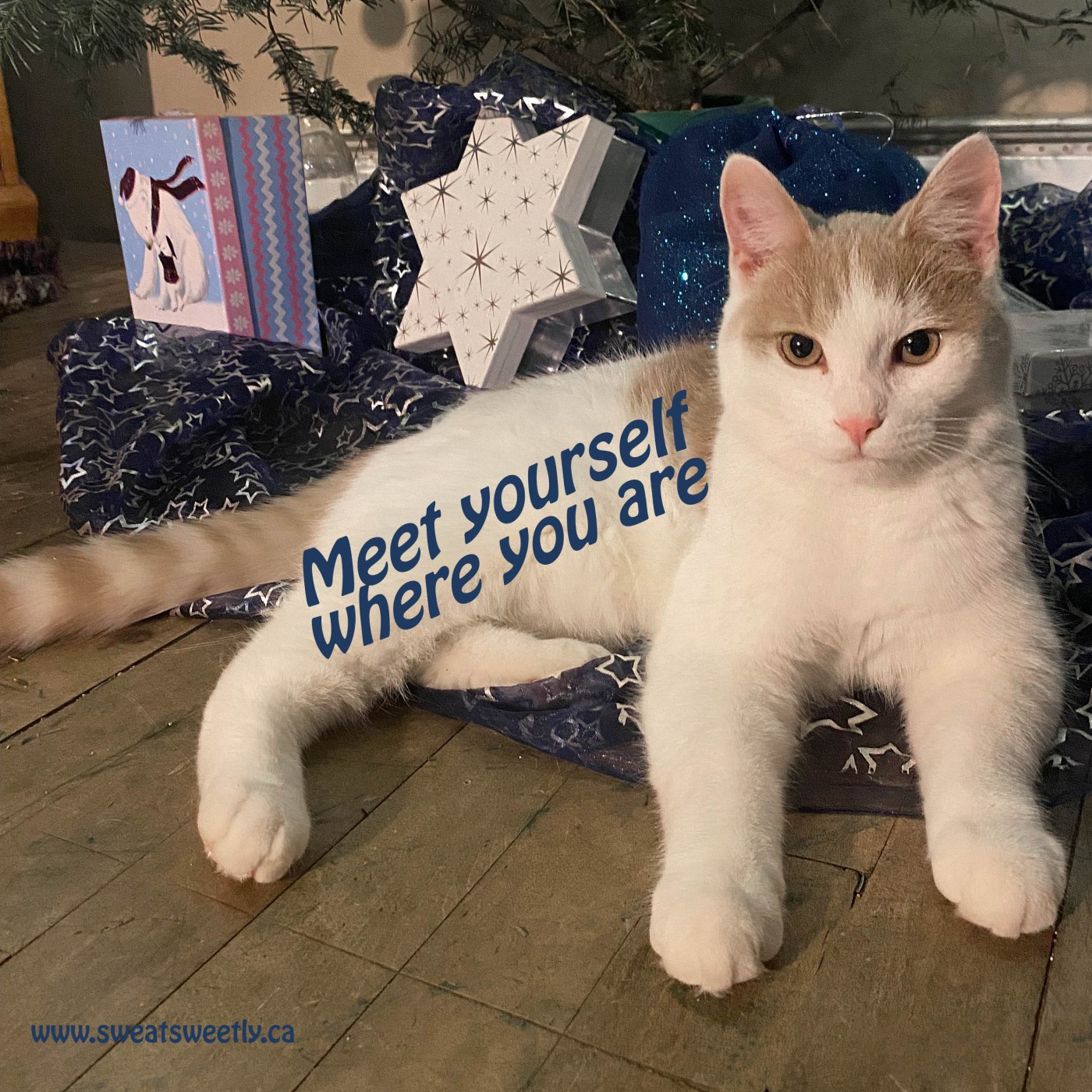 I wanted to give you all a bit of a life update but it’s not enough for a full post and it’s not all that dramatic. I’ll probably still make it longer than it needs to be though. I wrote a little about this sort of thing, celebrating calm times, a few posts back so if you’re looking for that sort of regular Friday motivation go check that out. I’ve been feeling a little like I haven’t been pushing hard enough lately, I’m still not back to my regular posting schedule on here, I’m not back to working out yet after my marathon, we still live in the same house to say nothing about the state of my bathroom. So let’s get up to date on all that. For now I’m settling into a calmer time after a crazy busy summer and back to my short day, home-body, teaching routine. I’m personally not all that busy or bothered by all the weekday rain we’ve had as my landscaping is barely a trickle at the moment. Plus we adopted a new kitty from the SPCA and I’m happy to just watch him be cute all evening long at the moment. It’s only in the last few weeks that I’ve actually realized just how much I accomplished this summer and you know what it’s break time.

Honey however has been trying to go flat out and definitely been bothered by the weekday rains. I’m back working with him most days when he needs me which isn’t full time for the moment and that’s okay with me until at least February. But that has been a little unpredictable so I’ve had a hard time getting back to my three posts a week schedule and that’s okay. I’ll get back to that most of the time at least soon enough. You’ve probably noticed I’ve posted a lot less this year. It bugged me at first I posted 148 posts in 2020 (with no training updates obviously!) and 95 in 2021 but you know what I’ve still had the same number of page views by the end of the year. So even if I didn’t get as many new readers I know the ones I have are dedicated and that feels great!

I’m not back to working out yet for a pretty specific reason partly because of all that rain, that unpredictability, a lingering cold and mostly because of my cycle. I’ve alluded to it on here but all the intense training this summer messed up my period and my weight at the start for longer than I’d like. I know (and you should too) that having period issues in training is a REALLY big deal. So I wanted to wait until I had three normal cycles to resume training, or really exercising on purpose at all. That is now but I have been pretty active at work in the meantime. I’ve also gotten back into my regular weight and eating routine which has taken some time as well. I’m toying with the idea of getting some hormonal support to help with that going forward depending on what I decide to tackle next year.

This past winter and early spring we were very dedicated to moving house and building, we even thought we had a lot picked out. But the road to it would have been a source of stress sometimes because it’s very narrow. Those times include, winter, when we needed concrete to say nothing of the pumper truck, when I’m towing something and for visitors. So first we decided that probably wasn’t the lot. Then we realized that we’d be stuck building at an expensive time to say nothing of the rental prices. What sealed the deal was how prevalent material delays would be. Those would be doubly or maybe triply expensive for us. In order to build we would have to shut down all our other jobs, we would be stuck in an expensive rental while we waited, maybe even an airBNB. Perhaps most importantly moving away from the water, the beach and the waves crashing got harder to do the faster we got to our self by date. It is as lovely as it sounds but it’s also perfect for beating the summer heat with those ocean breezes, triathlon training and the memories are tough to leave too. So for now we’re still in our too big house with not enough shop space or land to expand. We’re still exploring option one (moving) but also option two which is finding a way to stay put. Honestly, I think when the right thing comes up we’ll know.

I have been filling my time ‘just chillin’ more than I could be but I’m also fine with that at the moment. It’s only after slowing down I realized just how crazy this summer was. There were a lot of firsts. This summer was the first time I turned a side hustle into my one and only has to work thing. That meant I had to double my income from last year and I beat that goal by 50%. It was the first time I’ve ever had a part time employee who quickly wanted to become a full time employee and as great as that was it was really stressful day to day! It was also the first time I ever did full marathon training which started before busy season, included all of it and dragged on past. When I have a lot on the go I’m pretty good at just putting one foot in front of the other and I did a lot of that. By the way am I ever glad we didn’t move too! So I’m still taking it really easy at the moment and I don’t feel bad about that at all!

That’s what’s going on with me at the moment. This time of year it’s a good idea to look back on the year that was and pat yourself on the back because in some regard we do deserve it every year. We also can’t look at a single week or month in a vacuum we need to consider what came right before. So this weekend I invite you to think about your own life update, make an excuse or two and recognize that not everything we planned on doing has to happen and that can be the right choice too!