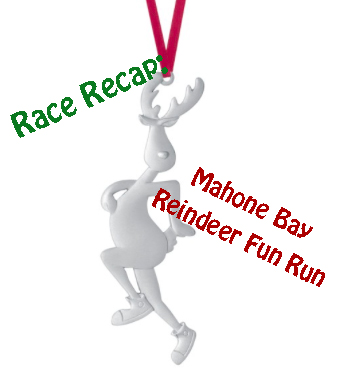 Sometimes you think you are done for the season and then something truly amazing happens and you just have to add one more! Can runners have a post season, well if they can this is my post season. In my case one of those people you would love to see do some running (or walking) texts you and says, “hey want to do a fun run with me?” Hells yes! Then you register a person you’ve never met for that run on your phone at brunch. Happens all the time right? Spoiler alert I did the Mahone Bay Christmas Reindeer Fun Run with my mom!

This is the first annual Mahone Bay Reindeer Fun Run as part of the father christmas festival and it benefits The Lodge that Gives. It’s a charity that provides accommodations for patients receiving cancer treatment in Halifax. It’s a charity that my stepdad volunteered at regularly. Mahone bay is this impossibly pretty little costal town full of charm and expensive real estate. Since it’s the first year and the town is SOOO extra the price is low (could be higher for the donation) and the bling is going to be EPIC! I have a secret plan/wish that my mom will get into running for so many reasons, one is that she would reap all those amazing health benefits and have some well special me time to her self. I also think that the parts of my personality that are helped by running (over thinking and saying yes way too much) I got from her!

So here is the secret plan:

But we’ll see for now only step 1.

A bit about the race: This is a 3k non-timed fun run. It’s the first year for this and there is some missing info so far on the web, like the route, elevations and support level. It also means I suspected it might start late. Little tip the first year a run goes down especially if it isn’t organized by some sort of running organization there may be some organizational hick-ups. The lodge that gives is the beneficiary of the run and is a really cool organization. In the maritimes Halifax can be the only hospital that offers certain cancer treatments for the entire province and the neighbouring two provinces. That can mean people are commuting 500 km for treatment and they need a place to stay in town when they do. Mahone bay is a very pretty and affluent town. I’m not sure about the antlers and noses but I suspect that Amos Pewter is donating at least a portion of the ornaments since each one retails for $19 plus tax. In this case there isn’t a race website but there is a Facebook page that’s well updated. It’s worth looking at the father Christmas festival page too since there is some info and pictures after on there too. Lots of door prizes and a best costume weekend getaway.

Parking and weather: We got there a bit over an hour early to pick up the kit on the ground floor of the Hub. We walked around town a bit and got a pre run hot chocolate at tims. We ended up parking just, just past the start line on the street. But parking two car lengths past meant that we could just pull out and leave when we were ready to go and pick up the next exit to the 103 around Italy Cross. Highly recommend this strategy, also there is plenty of on street parking and the lot when you first drive into town was pretty empty so you’ll be fine. As for the weather it was 5 degrees above and clear so you really can’t ask for better in December here.

Cheer squad: Obviously I had a cheer squad in my mom but Richard came to this one too. He knew about the secret plan because one I can’t keep a secret and two because he’s literally sick of me talking about it to the point we even had a few words about it. Perhaps I was coming on too strong.

This one is a dress up race so I was all over that for me and her. Since I already had two tutus that was going to happen so a snowman and a candy cane it was. Since my mom decided to just rock a sweater and a bow I went as the snowman. So a top hat, buttons sewn on a white shirt, a scarf and I added a giant sparkly butt bow to the black and white tutu, oh plus light in the tutu, gotta have that! If I don’t win for best costume I was robbed, AGAIN! Joking!

Course: Ok kids I dropped the ball on this one sorta big time, I was so excited to have my mom with me I didn’t start my app to track my route. Plus it’s not online anywhere else and it was complicated. It seemed to include a lot of little streets and back passage ways. I looked online to see if I could map it out and… I don’t think I can. Sad face. I guess I’ll just have to do it again next year, mom’s in!

Logistics and support: No water stops on the course but there doesn’t really need to be. There are tonnes of volunteers on the course marking the way should you need any help and water bottles at the end so you’re pretty well taken care of.

Race goals: Omg… have so much fun, maybe actually run a little and make sure my mom has a great time. I don’t even think it’s timed (it’s not). Mom was all revved up to run so I figured we would do a first workout from a couch to 5k plan. which worked pretty well. My running partner was all revved up to run the whole thing but when I explained this strategy would mean that we could actually run over the finish line and she was sold. So that was the success for this one I got to run over the finish line with my mom!

Swag: Lots of swag here and some pretty good stuff. The first 200 people get antlers, a red nose and a pewter Christmas tree ornament of Dasher the running reindeer. Since I’m a medal junkie I think I’ll be leaving it hanging on my medal board year round. Amos pewter is even engraving them for free if you bring it in, mom’s on it. No bib this year at least but you get a nice re-usable swag bag, some flyers including some discounts for things in town, ears and a light up nose.

Looking back: I wouldn’t do anything differently it was a super great time. Although start my app so I could have provided a route for this post but other than that nothing. That and my mom said keep her in mind for more fun runs! Plan to make mom a runner is in place… On to step 4.