If you read the about me page you’ll see that part of get wifed is about being let’s say not 25 anymore. On that note once you get to a certain age it’s time to think about your bad habits and that sucks. Did you know that 2% of adults die from a diagnosed liver disease. That’s pretty high right? Why don’t you know about it? Well it’s pretty stigmatized so people don’t talk about it. Did you know that over 17% of of voluntary blood donors have elevated liver enzymes. The truth is we are all doing damage to our livers with our bad habits. And I know it’s something you think about. It’s also something we have a tendency to minimize after all the liver is famous for it’s ability to regenerate but you can only push that so far. 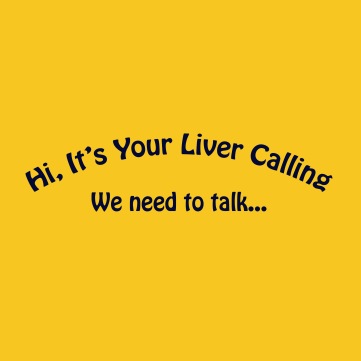 Birthdays, especially significant ones tend to make us look at out lives and take stock. At 25 I looked around and said, “I’m good.” As my thirtieth loomed closer I said the same thing but I knew then I wouldn’t be able to say the same thing at 40 if some things didn’t change. I had just, just finished my first short post-doc after grad school and the last 6 years, specially the last 4 had taken their toll. I was still a smoker, I had given up exercising and most days I deserved a glass of wine which always ran into two. I felt tiered, unmotivated, bloated and fat virtually all of the time. My evenings were generally cooking and eating dinner with honey, a few glasses of wine and reruns. My blood pressure was high enough that doctors were watching it and medication was coming up at appointments and I was avoiding the doctor like it was my job. Truthfully I was even googling livery things from time to time looking for news that I was fine. I never had any symptoms or bad tests but I did wonder what damage I was doing. Even though I never had symptoms or a bad blood test I did thing about long term damage. Heath wise I felt okay with where I was at thirty but if I was at the same place ten or even 5 years later I knew I wouldn’t be. None of the googling I was doing was reassuring.

I wasn’t doing anything most people didn’t do, going over weekly alcohol limits (5 drinks a week), still smoking, being mostly sedentary and feeling horrible in my own skin. Many if not most weighed more than me, drank more than me and moved less than me since my job did have me on my feet pretty often. There were dozens of people I could point to and go, “Well compared to them I’m TOTALLY fine.”  But then why did the are you at risk for liver damage test come back maybe, even though I was being optimistic with my answers (Just did it again honestly and I’m totally in the clear now!).

So why the liver?

Did you know that after your skin your liver is your second biggest organ, also did you know your skin is an organ? It is the major detoxifying centre for your entire body, so all of your bodily sins are dealt with by your liver. This includes but is not limited to Tylenol, alcohol, contraceptives, steroids, antibiotics, aspirin, statins, antidepressants, st. john’s wort, environmental toxins, Valerian, caffeine, chemotherapy agents, accutane, cocaine and THC. But the main causes of liver damage are alcohol, excessive weight, Tylenol overdose and hepatitis. Since the liver is designed to do this work, it has a fast turnover rate for cells and to a certain extent is self-repairing it can take a lot of abuse, until one day it just can’t anymore. Then you get cirrhosis and go on dialysis. If you are very, very lucky you’ll catch it before that you have a chance to stop what you’re doing and it will repair itself. Alcohol is the best studied and at least in that case the lifetime dose is pretty well understood before you do irreparable damage. So it stands to reason that it’s the same for other substances you can keep abusing it until one day it just sort of gives up.

The thing is we don’t hear a lot about people dealing with liver disease for how prevalent it is. So I’m going to talk about it. The reason it’s stigmatized is because is because often it’s due to some very intense and very bad habits. Not always though part of it is genetic too. All of those bad habits are whittling your effective time and function away from your liver and you might need it someday. You might be prescribed statins or even chemotherapy one day because you really need it.

Why is your liver calling now?

Eating junk and being overweight, drinking too much or doing drugs is taking it’s tole and once you’re reaching that thirties to mid thirties range or older you very well might have been abusing it for 15 or 20 years. Like me around 30-ish you might be cool with where you are right now… but what if you’re still there at 40? Do you still want to be smoking spliffs and doing lines every weekend ten years from now? A bottle of wine a night might help you sleep and ‘deal’ but those hangovers are getting worse every year aren’t they? Sure those 50 extra pounds are still pretty tight now but what will they look like at 40? Maybe a line or two is showing early from that pack a day habit but by 50 you’ll definitely have those awful ones all the way around your mouth. Plus if you don’t stop now you’ll only be adding to the liver damage in the next ten or fifteen years with all the prescriptions you’ll need to manage the health issues you’re causing now.

The late 20’s and early thirties are the last time you’re truly going to ‘get away with’ some of those bad habits. Chances are you know they should have been in the rearview around 25. Maybe you’re still single and living it up, hell maybe you choose to be and that’s awesome. Side note: I’m still not sure that at the heart of my being I don’t prefer to live alone so… do you mister or sister! But if you’re still living it up so are ALL of the people you’re meeting. Maybe that one bad habit, probably wine, is all you have left as a young mum or dad climbing the corporate ladder and you’re certainly not alone there. Check out one of my favourite bloggers here PLEASE! for more on that topic. Maybe getting to healthy weight has been put on the resolution list for another year like 2019 or even 2022. Maybe you just need it to cope until… but what are you going to replace it with. But for right now it’s fine and you’re just coasting right. You’ll get it together later, but soon later right?

I’m here to tell you the time is now!!! By you’re late 30’s or early 40’s you’re going to start getting the bad news from the doctor. High blood pressure, cholesterol, pre-diabetic, pre-cancerous, metabolic disorder and 20% atrial blockage is on the horizon potentially in the next ten years, but you know that too don’t you. Plus now you have the life experience to know that ten years is literally NOTHING! Even if you’re not getting warning signs yet it might be time to take the call.

My dad didn’t have any liver diagnosis but he was not the picture of health or a rebel may care diehard either. He was just barely obese, a pack and a half a day smoker and enjoyed a mostly nightly drink, alright maybe two but that’s it. He was a little bit fat, heavy smoker with a very stressful job. That’s it, not a morbidly obese, junkie alcoholic, just a dad with basically one bad habit and you know what didn’t get him? The cigarettes! Rather it was all the little assaults of the little stuff that adds up for too long. Pre-diabetic lead to full blown diabetes and then insulin dependance from being a little bit fat and probably a genetic presides position as well. That super stressful job, a few drinks and a sedentary lifestyle along with diabetic circulatory damage lead to angia, heart trouble, early retirement a quadruple by-pass and then a massive fatal heart attack. A little excess weight and sitting too much led to arthritis. But by his early, early 40’s the writing was on the wall. He was diabetic, arthritic, set in his ways and it took him down in a big way in the next 10 years and out of the game entirely in 20. Had he sat up looked around at 35 and thought I’m not doing this anymore he probably wouldn’t have had a single one of those diagnosis, ever! His experience was probably what made me sit up and take notice 5 years in to some lingering bad habits since I saw first hand what can happen if you don’t.

When you liver throws a brick

There was an Oprah quote I love and have found to be true.

Sometimes those come from your liver and sometimes it’s the brick. The whisper is the fact you know what you’re doing now, it ain’t great! The brick looks more like this:

That being said these symptoms don’t automatically mean your dealing with early stage liver damage. But as for those whispers when I went looking for self test stuff for this post it was pages and pages and pages of liver detox teas, diets and kits so lots of you are searching for that sort of thing and the google algorithm has noticed!

What about the wall?

Have you ever been worried about your liver health? Are you now? What is your liver whispering to you?

Read what I read