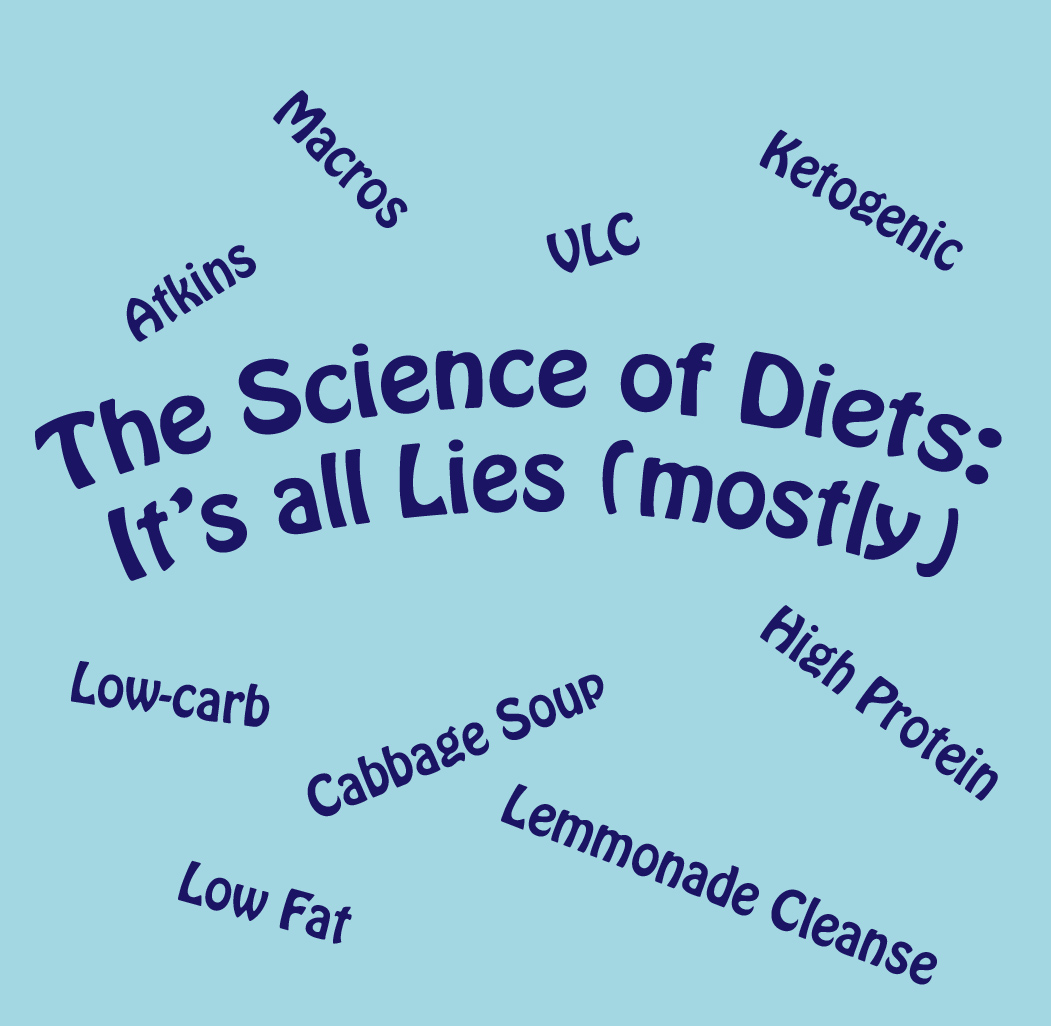 I’ve made no secret about it I’m not a fan of diets, like at all, but what does the scientific literature say about them? I’m not going to go on about my feelings again but check out this post on how to tell if you’re on a diet that’s doomed to fail and how little changes can add up to big pounds lost. My feelings are that diets don’t work for the vast majority of people and lead to no net weight loss and for a few individuals they can lead to long term unhealthy eating habits like eating disorders. My advice has always been to start of a healthy eating plan as a lifelong change and that’s it. But am I right? I decided to dive in to the peer-reviewed scientific literature to find out.

I wanted to take a look at this specifically because so many diets out there that claim to be about something else are actually just very low calorie. Some you can see a mile away like the apple diet, the cabbage soup diet, lemonade cleanse or baby food diet. But a lot of other ones out there are actually mostly just severely calorie restrictive. One I wrote about recently is the ketogenic diets that are popular right now. What ever diet you’re interested in add up the calories for each day for a week if it’s between 1500 -1800 its mostly just calorie restrictive, 1200 – 1500 is very calorie restrictive and less than 1200 is a starvation diet, you would qualify for food aid from the UN.

In one long term study obese people were put into three groups, either very low calorie diets alone, behaviour modification therapy alone or both. At the end of the study period were 13.1 kg, 13.0 kg and 16.8 kg. Fast forward one year and the results seemed pretty good 4.7, 6.6, and 10.6 kg, respectively but… those in the therapy only treatment were the ones that had the highest percentage in keeping all the weight off. And it only goes down hill from there, five years out the vest majority in all three groups had gained all the weight back and 55% in each group had put on more weight then when the study started. Another virtually identical study at 400 -500 calories a day (holy wow!) found wouldn’t you know it the exact same things a year out except all of the diet only gained back all the weight, 29 % of the combined group did and 44% of the therapy only group kept it off. In other words study participants had the best chance if they never went on that crazy diet in the first place!

In one study 96 women were recruited through weight watchers and randomly assigned to either the regular (balanced) point system or a low GI or carb option. There was no difference in how fast the women lost weight, how much weight they lost but some in the low GI group did report lower feelings of hunger in the afternoon. But there was no other difference between the groups success. Another study was designed to test the weight loss and other health outcomes between low carb high saturated fat and a high carb low fat diet wherein both groups consumed the same amount of calories. Wouldn’t you know it both groups lost and identical amount of weight and most of their health outcomes were improved and the same. EXCEPT… those in the low carb high fat diet saw significant increases in their ldl (bad) cholesterol levels. Further more a large scale meta review (a pooling of many studies) found insufficient evidence to recommend or advise against low carb diets in general, basically there was no difference.

New trend alert high protein diets are a thing now. They are supposed to leave you feeling fuller and lead to more success plus muscles are made of proteins so that’s good right? Well a review of many studies found that in general high proteins did lead to more weight loss in 6 months compared with similar normal-protein diets on average high protein participants lost 3 kg more in 6 months. However not a single study showed any difference in the two groups at a year or at more after the study ended. Another smaller study showed the same thing only the difference this time was only 1.5 kg on the high protein diet. So it might help you loose about 5 extra pounds in the short term but does nothing in the longer term.

For our purpose here we’re looking at programs that put participants on an eating regime that is the target for their goal weight long term. I tried to stay away from programs that also included a rigorous exercise routine as I thought that would just muddy the waters. One study in California evaluated the shape-down program for older adolescents. The program advocates for small sustainable changes in diet and exercise, effective communication techniques and cognitive behavioural strategies. It also avoids severe calorie restriction. Participants were either enrolled in the program or not and those that were in the program lost on average 10 kg while those not in the program lost only 0.1 kg a year out. Fifteen months after the program ended participants in the shakedown program weighed 5.5 kg less than the control group suggesting the effects were long lasting.

Using databases of people who have successfully lost over 10% of their body weight and kept it off for more than 5 years certain strategies kept coming up over and over. Those were physical activity (≈1 h/d), eating a low-calorie, low-fat diet, eating breakfast regularly, self-monitoring weight, and maintaining a consistent eating pattern across weekdays and weekends. Not sexy but it works. In another study participants were separated into two groups those that followed a very low calorie diet and those that were told to follow a regular healthy diet and fitness regime. Guess what the super dieters lost more weight initially but a lot more in the more moderate treatment had the weight off at 5 years.

So why is it that we have all these different diets but they don’t work?

The thing is … your body is able to withstand lean times and so It’s really, REALLY efficient at getting energy from any source. Carbs are broken down into sugars, proteins into amino acids and fats into fatty acids and acetyl-CoA. Eat to much of anything and you store it, eventually as fat no matter what you put in. To maintain any weight it takes a certain number of calories. Eat less than that number and you’ll loose weight. If you eat all carbs, fat or protein and don’t get the number right to maintain you’ll loose or gain, to a certain extent it doesn’t really matter what you put in, at least for your weight. Ask you’re favourite neighbourhood biochemist and they’ll tell you I’m right, PS I am one of them. Here is the figure of ‘just’ the major reactions in metabolism. Believe it or not at one point for a short time I had all this (and more) memorized for my third year metabolism course.

So unfortunately there is no silver bullet, no magic new diet that will do wonders long term. If you’re in it for short term results and want to regain the weight later, possibly more, go for it. Look up the number of calories for your goal weight and height here, eat that in a balanced healthy diet and you’ll only ever have to make one change. If there’s a new diet next week the same rules apply. So why do we keep buying into it? Marketing and we all already know what we need to do. Eat less move more. Start with portion control and let it evolve from there! Ask for help from your doctor, your family and a dietician not the internet, some celebrity or a crazy fad diet book, what ever you do you’ll have to keep it up for life!

So what is the craziest diet you’ve ever heard of or tried. Next more serious question how many of you know someone that a diet turned into an eating disorder for? If you lost a lot of weight and kept it off how did you do it?

Read what I read

9 thoughts on “The Science of Diets: It’s all Lies (mostly)”