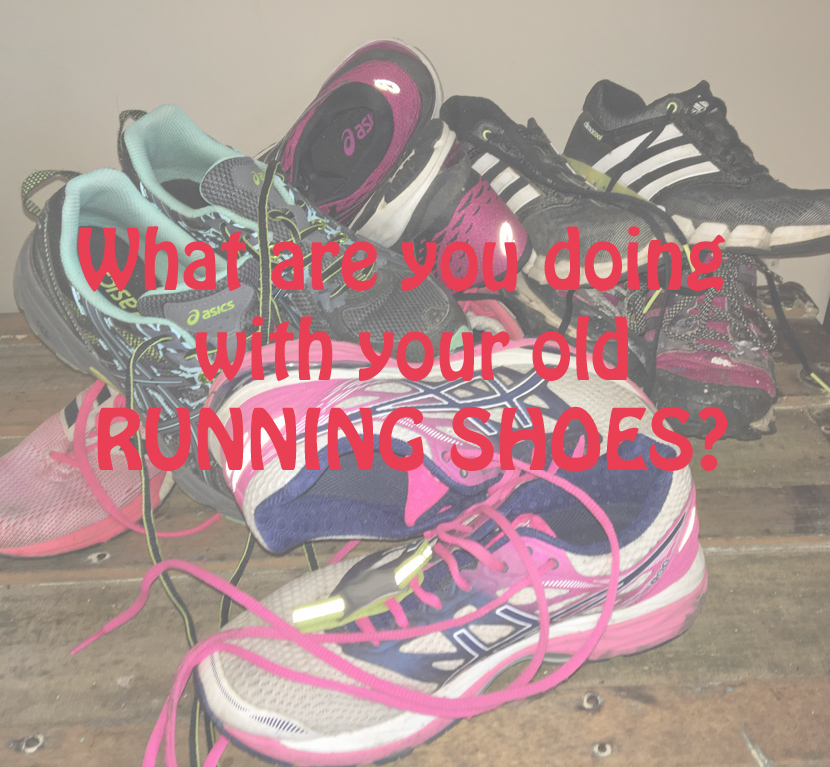 Which is to say what should I be doing with my old running shoes? It’s not that I need any help transferring emotions onto inanimate objects, I got that covered already, or that I need any more shoes but I’m fresh out of ideas here folks! What I normally do once shoes start to feel dead, have too much wear or occasionally reach such a high milage I just have to retire them is wear them to work. But right now I have a great pair of work shoes in the form of old Adidas trail runners that just went into rotation and count em’ three more pairs almost ready to retire. So what do I do with them? 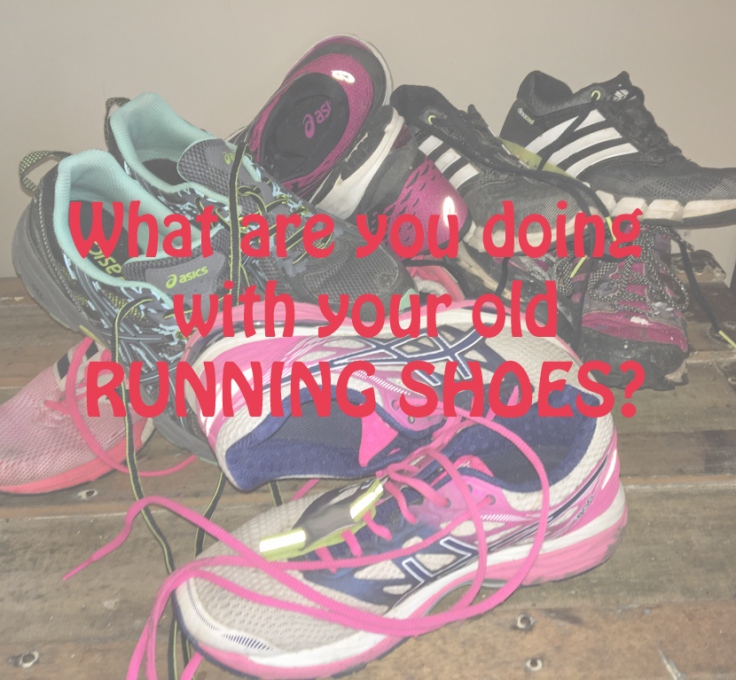 My Adidas supernova’s lead me to a 10k PR and were with me during my first half marathon and that’s some great service! But they have these weird bottom vent things that while cool means they really can’t be worn for much. My Boston Boosts were with me for a 5k PR wearing a tutu and were not cheap! My Asics Gel Cumulus 18’s well they weren’t with me for anything special and got burned through all winter but they were my very first pair of Asics and they rocked! Right now I’ve got the 19’s (already have a half PR on them) and some trail runners by them in rotation now and I’ll need another pair of something around the new year at the latest? Plus when I triathlon later this month I’ll be wearing shoes and I’ll probably want to keep those too. Do I just have work shoes covered for the next 4 years or is there something better I could be doing with them. I legit need help here folks. I’ve come up with a few ideas, where I’ve ‘borrowed’ a photo the link is in the caption but none of them seem just right yet. At the rate I’m going through them now I can afford to do something special with the ones that have been there on big days and still have lots of work shoes. So what do you do with you’re old running shoes? Here are my best, not all that great ideas so far.

So this was my first all by myself idea and it’s not great. Basically I would get some dowels, paint and well make a shoe mobile. But… what room is just crying out for a shoe mobile? It probably wouldn’t smell all that great and how do you explain it to guests since it’s obviously going in the spare room? But it gets points for easy and obvious. Apparently not that obvious though as there was no image to steal.

Second idea, put old significant running shoes in shadow boxes and hang them as quasi art. Alright but do I frame one or both of them? Most boxes aren’t that deep so I’d have to make them and no where in the house is screaming out for this particular decor item either. Plus in a running career how many of these will I end up owning?

Some days I’m like take a picture and move on girl. Except they’re old, very used running shoes that I’ve actually run in. They’re pretty much worn out, no one is going to buy my obviously old sneakers since they all have a pair of old shoes anyway. If you know of a good use for them please let me know but since they seem like they’ll just end up in a landfill anyway and I am sort of attached to some of them anyway…

I guess I could point to it and say look how dedicated I am but that’s pretty much what I have now… They’re all in my running gear catch all bin and there in lies the issue it’s getting hard to find the shoes I want for all the ones I don’t want to wear anymore.

Get honey to build a fancy shoe shelf

This one appeals to me I could hang is somewhere in our gallery wall next to my medals somewhere borrow my mom’s label maker and switch them out when I accomplish something bigger and re-label. This would give me a defined amount of space to deal with and be visually interesting at least. Except we all know none of our running shoes look as snappy as these when we’re done with them.

This seems doable but my house looks nothing like the pages of architectural digest where this is from. Plus we’re already our of wall space with actual art and family photos. Plus that’s like A LOT of pressure to run! Even with my currently out of control situation that’s not even a whole shelf! Also this option seems like I’d have to dust them and that ain’t gonna happen. Plus mine would just end up looking like more clutter because you know I’m a human and actually live in my house!

As you can tell from this winner of an idea the inter-web hasn’t been super helpful on this one so far. Who is doing this and where are they storing them? I guess it does get around the dusting thing… Makes the mobile idea seem like a good one again!

So as you can tell I’m fresh out of ideas if these are the best I can come up with. What are you doing with your sentimental old runners. Are you just tossing them like you know, a normal adult. Please send help!