It’s happening you guys, I’m really and truly getting ready and somewhat confident I’m going to live through this triathlon thing later THIS month! But I also have a list of things that probably aren’t going to happen adding up too. Things like using my aero bar or even riding the drops, finishing in three hours and having my knee magically healed by race day. But that’s then end of negative Nelly for this post because I spent this week realizing I really can do this ya’ll! I also spent part of this week thinking about why I set this as a goal for myself in the first place but you’ll have to wait for the post race posts for that. This week’s bricks were race day distances and I’m happy I put that into the plan. At this point headed into peak week I’ve got no doubts I’l be able to get this done on race day!

Besides getting all sorts of excited which I so am lots of other big things happened in training this week. Bike stuff, lake stuff and knee stuff and overall the pieces are all starting to fall into place for the big day and I know I’ve said it twice already but I’m getting excited! Plus I found out the race is now sold out!

Tuesday: 9 km run: I’m loving this evenings free thing, enjoy it while it lasts right? But I did just notice in putting this post together I was a km short on this one. I legit thought I had 8 km to do and so that’s what I did. It was a great run on a great evening in my very favourite running skirt. Side note I went thrifting later in the week and found a new with tags running bra that matches it even better. There was no denying though during this run that the idea that training for a triathlon would magically heal my knee was a fallacy. It hurt quite a bit but since there was no more running for a few days I decided to do what I do best with knee things and ignore it!

Wednesday: 1600 m swim: This January 4th we had a huge winter storm and it ripped apart our beach road and parking lot. If you want to see some crazy photos of it check out this post I wrote about how to ride out a storm. Tragically a sign turner was killed at the site shortly after (at the bottom of our driveway) when crews were working to repair the road and work was suspended. And so it stayed like that for 6 months. But it’s a busy beach in the summer and a provincial park and so the push was on for them to get it open for Canada Day and the summer swimming season. Which is to say the park including the lake was closed this week. Though a lot of people ignored the signs I’m more of a rule follower as long as I can be. So I headed to my mom’s lake and the one I grew up on after sizing up the size on google maps. I swam in that lake almost daily as a child but it should be noted I was kinda the only one. There’s nothing wrong with it but it’s got the muddiest of bottoms, is very shallow and has a lot of lake grass growing at either end plus it’s weirdly low this year. But I’ve never seen a leach there. Most people don’t swim in it but it still doesn’t bother me. That said I do think it’s more pleasant to swim in the deeper one near my house though lots of people won’t swim in that one either. I did 3 laps and a bit of the lake and then had a hot shower at her place before heading home.

Sunday: 40 km/ 10 km brick: The first thing I did when I got home was check the rest of the schedule and re-confirm that this was the last brick workout. I had quite a nice time but I’m starting to think that there is always a lot to say about a brick workout even more so than a long run and this one is not exception. Plus it was the first ride on my road bike in training. Earlier in the week honey helped me install my new tubes and tiers. I’m ashamed to say I’ve never seen inside a bike tire before and I did the second one mostly on my own. I joked that he was kinda like my dad at the time because I feel like most people’s dad’s teach them to change a bike tire at some point. The tire I got is a Kenda Kwick Tendrill Endurance which is a foldable tire in 700 x 28 and they were tough to get on. I did the second one and pumped them up with the tube pump because that’s what I’ll need to do if I get a flat on race day.

After my 45 km bike ride on my mountain bike I knew this one had to happen on the lighter bike. It actually ended up going really well but the first 10 km was legitimately nerve wracking. I stopped every 5 km to check the bike and at 15 km some adjustments had to be made. I felt like I did when I was helping my mom and stepdad learn to ride since I was contently reminding myself what to do and what to be careful of. Then I reminded myself that I didn’t have to have it all figured out in the first 5 km. Everything went well but the seat needs to go up and inch or two and the big gear shifter isn’t working so there are a few things to do but then it should be so damn close to dialled in. Nothing of real substance happened on the ride but where an ATV had done some doughnuts and tore up the trail I did come to a fast stop and connect my knee with the frame nothing more than a groovy purple bruise. After I stopped at km 25 to take my picture I really settled into the bike and got a lot faster. I did notice it’s light weight carrying it into the river though so that’s pretty cool! By the end my death grip on the horns had subsided but I’m not sure I’ll be even able to ride the drops later in the month. 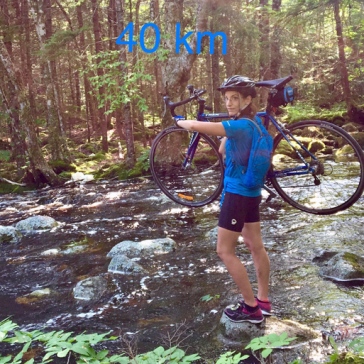 The brick effect wasn’t so bad this week when I started my run maybe because fo the bike or I’m getting used to it or I took a bit longer making the transition. But the run sucked since my knee was sore and my tape barely stuck this week at all. I really didn’t toy with the idea of cutting either short this week since I knew that as soon as I’d completed it I would know it had what it takes on race day. I took a picture with my running Canada Day Flag since all this went down on Canada’s 151st birthday. I even popped my last bottle of (fake) champagne and ate poutine to clean rate after it was done!

Monday: 1000 m swim: So I didn’t end up going swimming but there was water involved it came down to swimming or going fishing. The thing is we had pretty firm plans to go fishing at 6 when I got back from my brick workout it was already 7 and honey was still mowing the lawn plus it was getting really dark like it was going to rain. It took a bit longer because I stopped to check the bike a lot and my exploring took me to a really cool river. So we went Monday evening instead and it was the right choice. Honey even got me a new fishing rod and reel that’s all mine and just for me. I always borrowed one of the kids in the past or one of his but now have my very own! Well we fished for an hour or so and caught all sorts of big mackerel. Here it is the secret to fishing you have to call them, “here fishy, fishy, fishy.” Also fish mackerel because there are a tonne of them and they run in schools. I didn’t swim but the fish did does that count?