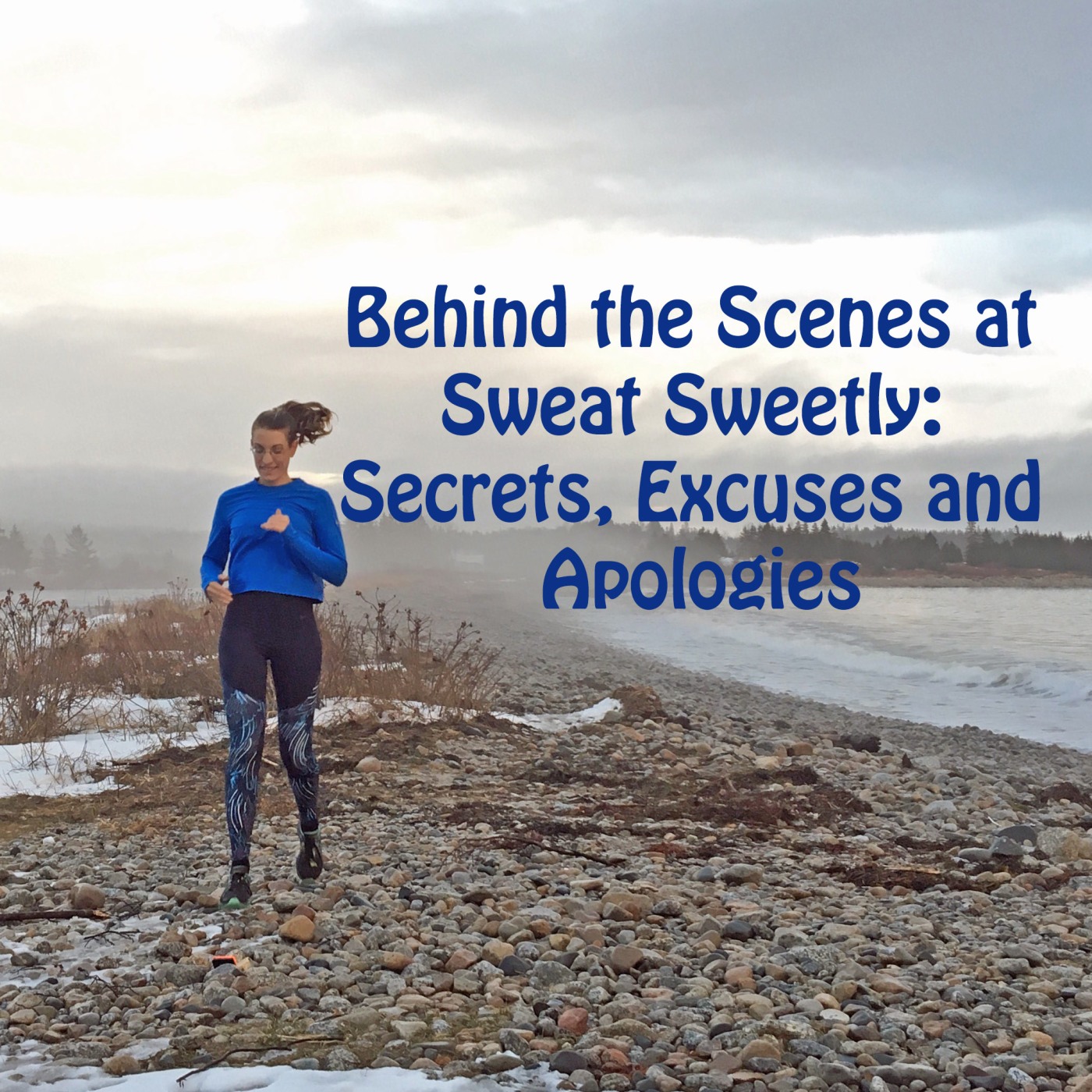 I’m not perfect I get it, there are errors on here from time to time and the odd inconsistency maybe so I wanted to clear them up, clear the air and make some excuses. I mean give you all some explanations on the behind the scenes stuff. Life stuff, blog stuff and writing stuff. Keen readers might notice that this is a typical Wednesday post coming at you on Sunday and that is correct. I had a Sole Sister’s race recap scheduled here and planned to post late in the day but the Wednesday before today I realized that wasn’t going to be do-able so… We’re switching up the schedule. So let’s pull the curtain back and dive into my deep dark secrets, and stuff I’ve wanted to cop to for a while now.

How I write: why there are so many typos

How many mistakes should there be on a post? Zero! How many are there? Not Zero! Most of you know that sleep can be a struggle for me, especially winding down and getting to bed. That’s actually a big part of why I started this blog. In order to hit the hay by 1 am I go upstairs to my super dark office at 10:30, drink chamomile tea, watch boring repeats of shows on my computer which has an app that darkens the screen way below factory settings. Think Dr. Phil episodes I ignore, Gilmore Girls on repeat and mindless beauty youtube videos. Previously to blogging I ruminated on negative stuff during that time a lot and I wanted something to fill that time that was somewhat more useful than nothing. I’d always thought about blogging and it’s turned into a super positive, creative outlet love of mine.

So I’m writing posts on a split screen of my 20 inch iMac now which is a big improvement over the 11 inch air I had before but picture the display brightness way, way darker than the lowest setting. So the odd typo does totally slip by. I’m alright with that. Besides that whatever writing skills I have are not equalled in my editing skills. Which is to say I tend to read things, especially things I write, as they should be rather than as they actually are. Don’t worry though if I’m reading your stuff the same thing is true too. So messing up the odd word here and there is pretty true to who I am, flawed and all. If typos drive you nuts I’m sorry about that.

Organized but under the gun

I’m pretty organized overall, let me think about that … no that’s true. Things that I have complete control over tend to be pretty organized, the kitchen, my office, laundry and clothes not always the gardens. So the posts for Sweat Sweetly are planned well in advanced. As new ideas pop into my head I add them to a list in my phone as every second Wednesday or Sunday ideas. Lot’s have bullet points under them. Then those ideas go into my ical about 3 months in advance. All that is synced to my phone, my computer and my watch. I feel like that’s pretty good. The other thing you should know is on my list of big ideas/goals next to my desk is the perennial ‘get three weeks ahead’, which hasn’t happened since May of 2018. Not that I don’t try. If I know I’ll have a block of free time I plan to use it as a writing retreat, like PEI last year, while honey was away in February and this coming July. I never seem to actually get three weeks ahead, but I mean it this July!

I’m usually not writing right up until the day before but that’s when I’m doing the pictures a lot of the time. I could feel some stress about that but I’ve chosen not to because 1, I always seem to get it done and 2, this is for fun after all. I could be writing more on rain days than I am but after a good hard run at work for at least a week that usually doesn’t happen. The first day off is for sleeping in, running or biking and maybe some house keeping if you’re lucky. The second rain day I get to writing but usually by then we’re just working in the rain. So time pressure also let’s the odd mistake through too.

I’m not that cute: Makeup and editing

One of the things I really like about blogging is I get to use my photography skills all of the time. It’s something I love to do but before starting my blog I never made the occasion to get out there. So yeah, pretty much all of the photos on here are edited, mostly for lighting and color. I take my exercising photos using a burst app (described here) and I usually shoot 60 per workout. Out of those 60 a great success is 5 good ones. Others I look angry or constipated just like everyone else. Usually I just make adjustments in my photos app but 5% of the time I take them into photoshop to correct something weird. Maybe a funny shadow in an otherwise good picture, remove a VPL (visible underwear line), blemish or the like.

I also wanted to put it out there that because I want people to know that my running photos aren’t totally ‘natural. I also post those pictures on my instagram and then use others on here. While every picture doesn’t have to be a knockout I do like to feel comfortable and great about the pictures I post. On here you’re more likely to see the funnier ones than on the gram. And you know what I have no shame in saying I’d rather be wearing makeup in those photos than not. I look cuter when I do and I like the pictures more when I do. Not every picture and post am I wearing makeup but the vast majority I am. If I run in the morning or during the day I typically have to be a made up grown up later in the day and though I like putting on an wearing it I don’t like doing it twice in the same day. I usually throw on a little lipstick before my runs since I don’t wear it regularly totally for the pictures. For evening runs I could wipe it off but I don’t because I like it on even though it’s not great for my skin. Here’s the terrible truth if I’m not wearing make-up and I don’t have to later I put on a BB cream, mascara and a tinted lip balm solely for the picture potential. A little, or a lot, vain? Yep, but it works for me!

This is where I get my special alone time

I recently heard the term ambivert which encompasses being both an extrovert and introvert and I think that describes me (and probably most humans out there.) I get a lot of energy from people and talking to people and I don’t think those people always want me to go away. But spending time alone grounds me and makes me a better more interesting person. I both get alone time blogging and the blog helps me protect it. I obviously live with my partner and we work together every day. Writing every night gives me my own space and doing this on the regular also helps me keep getting out there and be active mostly alone too. In addition to work life and home life with honey I also do other stuff too. I teach, garden for others sometimes, write freelance stuff and have things like chores to do too. Sometimes I can be pulled in other directions too. I think it’s fair to say I’m the go to for both sides of the family for other stuff and I genuinely am happy to do it. It might be house sitting, dog sitting, speech writing, errand do-ing, driving people around and the extra nice couple stuff that has to be done.

Writing a blog helps me carve out that time for myself and sometimes make other’s respect my time too. That’s part of why I love it, it’s just a good fit to be part of my life.

I would say 80% of the workouts I do end up on the gram. Hey it’s a great source of content right? Sometimes the picture just doesn’t go right, I’m with the parents or someone else or I’m just not feeling it that day.

Just incase anyone has been trying to read between the lines for a while here, let’s lay it out there. I do talk about them from time to time but I do my best not to put aspects of their lives that don’t over lap with mine online. So what is going on with my family? It’s complicated, sort of but not really. I live with my partner (fiancee) who has 4 very adult children from a previous relationship. He’s 12 years older than me. I never lived with any of the kids but I’ve known them for 15 years and my fiancee a year longer. We’re all pretty tight the help each other out, like each other, get annoyed by each other and celebrate each other. Including their mom. I don’t write about how to navigate that sort of thing very often. I would say however that when you get to the stage where you can be mad at each other and then makeup after you might very well be ‘in’,

On my side my Dad passed away when I was 14 and he too had previous kids and then me and my sister. My mom re-married after a long time to another widower and my mom and step-dad are the ones that go running with me sometimes. Everyone get’s along fine but not all of those people live handy to me. So we’re not all as close with each other as we are on honey’s side. So that’s that!

My life is not perfect, far from. Before I ever started this blog I decided that I wanted it to be an optimistic uplifting space and not a place for me to rant though I have done it when I feel like it’s important. Even if I am someone to put a happy spin on things naturally like anyone else I don’t want to air any dirty laundry on the internet. Just like anyone else I have fights with my partner and others. Sometimes I have to pinch my pennies real hard and things at work do go sideways. If I figure something out about all that stuff you might find that stuff on here hopefully in a sunny way.

So that’s all I could think of that ya’ll might be wondering about. But if you have questions about life stuff I’d probably be happy to answer those too!

One thought on “Behind the Scenes at Sweat Sweetly: Secrets, Excuses and Apologies”