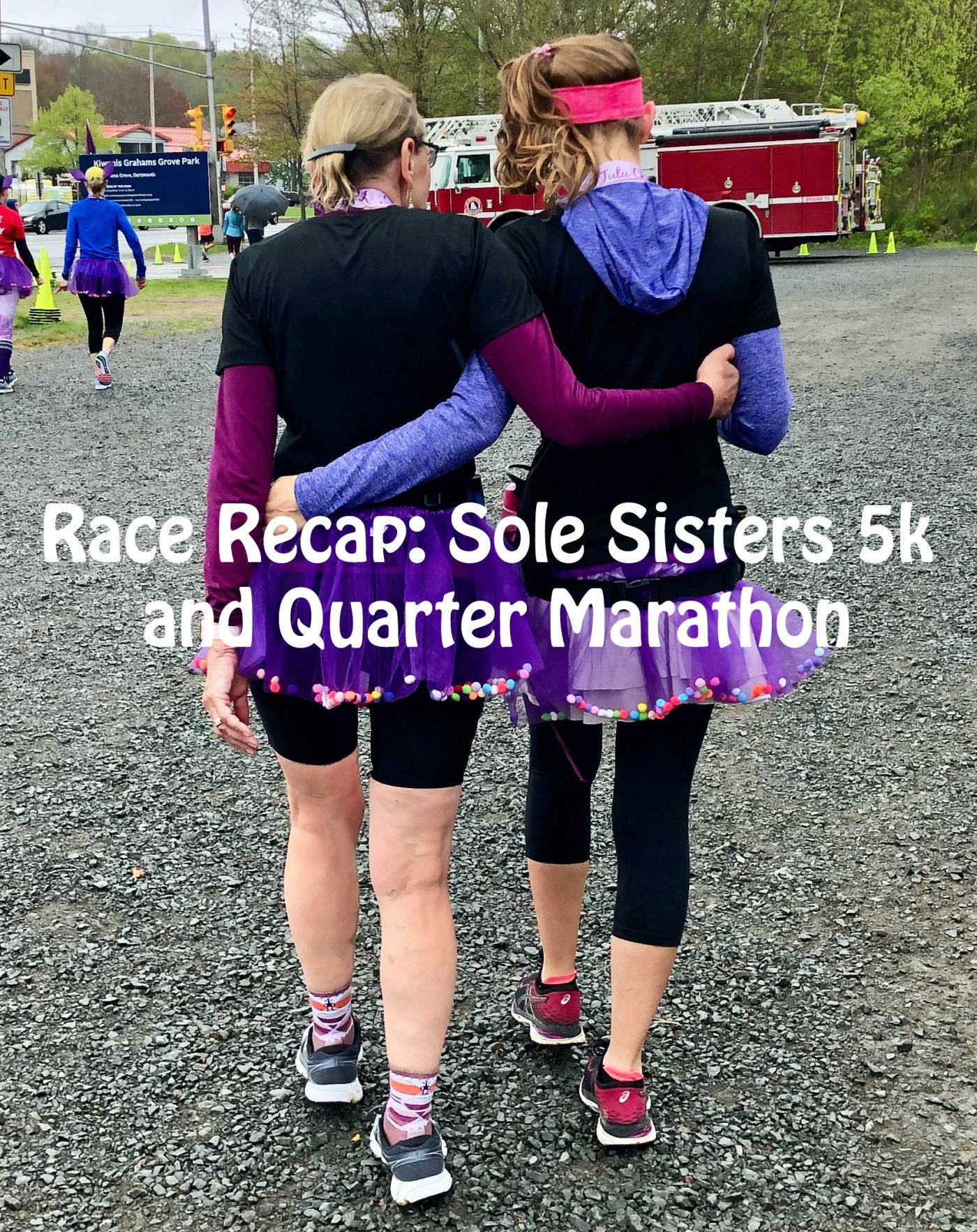 I did my first 1/2 marathon with Sole Sisters the inaugural year in 2016 and it was pretty great. But I wasn’t in a big rush to go back there and run it again at least by myself. Don’t think for a second it’s not a great place to run alone because you won’t feel alone with all those amazing ladies around you but it might be best enjoyed with another female runner you love. So when my mom decided she wanted to run a 10k after all, I knew the right place was Sole Sisters. Get ready and strap yourselves in for a long one because my mom and did ALL of the things at Sole Sisters this year, the untimed 5k, the quarter marathon, the tutu wearing and the Little Miss Sole Sister’s 100m dash with my niece for her very first race! PS it’s been two days and she’s still pretty taken with her very first medal.

A bit about the race: Sole Sisters is the only women’s only race around the maritimes and has been for 7 years. The tag line is finish lines not finish times and so it started off as a fun, untimed ladies run. But it’s evolved since then to add another 5k, quarter or half marathon. For these races on day two you can choose to be timed or not and it’s even part of the run NS race series.

This race is known for having it all and that’s only gotten more true over time. They’ve always had top notch bling, tonnes of on course support and firefighters handing out medals. They also now have an annual tutu, an affordable medal only option, virtual option, tones of other awesome swag and free race photos. That believe it or not is an incomplete list! A lot of those reasons are why I opted to do my first half with Sole Sisters years ago. The events tend to sell out so if you’re considering it register early.

A portion of the proceeds also goes to the girls gone gazelle run club which encourages girls 9-13 to get active for free. Typically the girls also participate in one of the races as a graduation for them. That’s a pretty cool thing and if you’re interested they are often looking for volunteers. The race director is the unstoppable Stacy Chestnut whom you’ve probably seen manning the Sole Sister’s race booth or breaking records around town. She’s really passionate about what she does and super friendly. So go over and say hello! Stacy is definitely the architect of this entire event and so rest assured no detail is overlooked even if I forget to mention one or two.

As fun as this event is parts of it can be super serious too but only if you want it to be. The Saturday night event is untimed and fun but the Sunday event is part of the Run Nova Scotia Performance Series and I think people generally opt to be timed at least in the 10k and half marathon option. All in all it’s probably the most fun you can have embracing girl power AND collecting age group points. Honestly the ‘about the race’ section on this one could go on forever and not quite do Sole Sister’s Race Series justice, if you’re curious you might just have to experience it for yourself to understand it. But I will try to do the experience some justice as we move along. Prices range from about $35 for the basic 5k to I think about $135 for the full tutu challenge.

Parking and weather: Parking is the same for all of the races and not as bad as you might be expecting. The staging area for the race is Graham’s Cove Park across from Superstore. Now that Superstore is 24 hours so you can’t park there but there are quite a few options. The edge of MicMac Mall is reliable but a bit of a trek. We did really well with side streets near the park and there are a few weekday only businesses that could be good options as well. There is lots of good information about where to park on the website and I don’t think I heard a single person complaining about it being an issue all weekend.

The weather well that was a different story. It was well into the teens and sunny for Saturday night but a totally different story for Sunday. Overnight Environment Canada issued a special weather statement for Sunday for wind and rain. That was certainly the topic of conversation waiting at the porta-potties on Sunday morning! Mom and I ended up being lucky for the 10k the wind was pretty strong but the rain held off until about km 8 for us. Lot’s of ladies however finished their quarter’s and especially half marathon’s in the driving wind and rain though. It was cool but not frigid cold for the Little Miss events and raining pretty hard but the littlest runner among us took it in stride the most.

Cheer squad: The two of us went to the night race alone but at Sole Sisters pretty much everyone there is each other’s cheer squad! Honey and Mom’s Honey came along bright and early Sunday morning to cheer on their girls and play personal race photographer as always which was pretty cool. They did a great job! One neat thing that happens on the fringes of this race is the throng of cheering men at the start line and the finish line for their special ladies. Our little miss had a cheer squad of 7, both the racers, honeys and her mom, dad and little brother!

Logistics and support: Impeccably organized is the only way I can think to describe this race but somehow it still seems like an understatement. I believe there were three water stops on the Saturday 5k course one of which was also a chocolate stop with chocolates from The Newfoundland Chocolate Company. For the quarter there are 5 and for the half 10 water stops and I believe gatorade and a porta-potty is available at all of them. The races of course started on time and all the ‘extras’ are off the hook. Your medals are handed to you by handsome firefighters and awesome military personnel. The last cheer station was all Canadian Forces Ladies in formal attire, you can have your picture taken on top of a tank and an 80’s theme! How cool is that? There are tonnes of inspiring signs on the course and it’s so well marked out that it would be almost impossible to make a wrong turn. Plus many of the on course volunteers are men in tutus and that never gets old! One of those not overlooked details, all the little girls race bibs have the number 1, how awesome is that?

The courses are both true to distance the 5k is around Lake Banook and does involve one really big hill with an elevation change of 44m and the quarter/half course is basically the same with an additional jaunt through Shubie Park. It’s pretty hilly with an elevation change of 176m once around the loop. In addition to supports available at the water stops there are also ambassadors on the course that you can flag down should you need help. All of this taken together makes Sole Sisters the perfect place for your first race or to push for a new distance!

Race goals: This one was just an opportunity for me to play personal pace bunny for my mom at her first 10k and to have lots of fun soaking up the whole experience. I have to admit that I was also really excited for my little niece to do her first race too. I also really wanted to CRUSH the 80’s theme and any associated race photos! All in all I’d say I accomplished all of that! Plus my mom and niece had a great time and that was the real win here!

Swag: SO MUCH SWAG! We did the full meal deal tutu challenge and so we got a tutu obviously, shoe bling and two shirts. Now I thought both shirts were included in race registration but I’m not totally sure. The website says we got 2 swag items, I remember there being choices like hats and buffs as well but mom thinks we paid for the second shirt. I don’t know because this race was a Christmas present for me! One thing to note is that the technical shirts for Sole Sisters are bar none the best ones out there in terms of performance so I won’t be cutting that one up for the race quilt. The purple one I’m torn on, it’s super cute and more cottony than the technical shirt so I might keep it intact but I’d really like to have one from today in the quilt for the memories too!

Looking back: Last time I did Sole Sisters it was all on my own, it was still a pretty cool experience but it was a lot more fun WITH a another runHER! I think that it was the perfect place for my mom do do her first 10k or really any runHER to collect their first super cool medal. I’m not in any huge rush to do it alone again but if literally anyone wants to do it with me  I’m game. Overall Sole Sisters is just as awesome as it sounds but you have to run it to really get that! Next weekend it’s the 10k at Bluenose after a 1 year hiatus from that distance at Bluenose with the other trainee. We like to keep things fair around here!