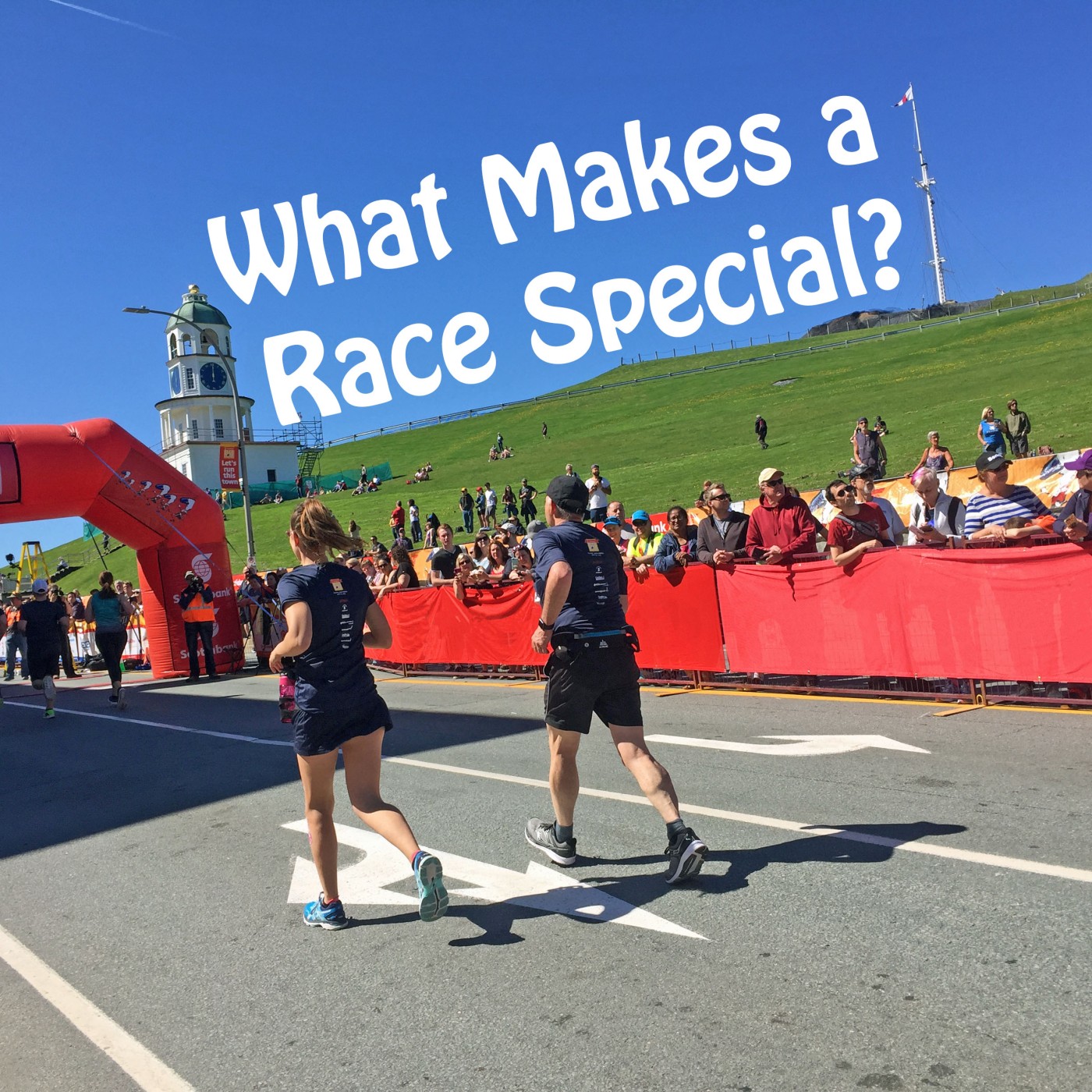 Races are all fun right? I’d be a terrible critic for movies, food, races and pretty much everything else. For the most part I just like it all! I almost never say something wasn’t good, well except some of the movies honey watches but pretty much every one with Russian gangsters follows the same plot line. Back to the topic at hand though, what does make a race special? I don’t think I’ve ever been to a race that I vowed never to return to even though the odd one had some organization issues. I can already tell this isn’t going to be an exact formula for designing the perfect race for race directors but rather probably a celebration of all the great things races can be. Or at least all the different reasons I love the races I do. Because I like to share the things I love with all of you I’ll be ‘awarding’ a race I’ve done in each category that I’m making up right now. If something strikes a chord for you sign up and read the race re-cap (the link in the award section if available) that goes along with it. In that spirit share your favorite and the reason you love it in the comments below, you never know who you’ll see at the start line next year!

The little community race that can

The good news is there are lots of these events out there so you can pretty much sign up for one every weekend. Theses races are usually put on by a very local charity which may or may not have anything to do with running. I suspect that a runner joins the ranks of the charity and ropes everyone into holding a race. Even if that’s totally the case you can tell the aid stops, medal givers and pre-race pump up are done by people who are already staffing that charity. What’s great about these races is they don’t try to be something they’re not. The medals might be homemade, the timing questionable (possibly with popsicle sticks) and the shirt cotton or absent but that’s not really what it’s about. These races might be one offs or be ongoing year after year but chances are there aren’t thousands at the start line. There’s something special about the fact that everyone there really is passionate about the cause even if they’re a little clueless about running.

And the award goes to: Bridgewater YMCA Trick or treat trot

There’s a good chance you’ll have to travel to this one. It’s serious once a year and there just aren’t that many of them. They have a marathon for sure and it’s a Boston qualifier, but that’s not all they probably have a corporate sponsor and smaller sponsors for each race. Sadly since 2013 they probably have a big police presence at the finish line. This is the big deal, once a year race in your state or province. They are expensive and still probably don’t cover their costs even though over 10 000 people participate. There are designated corals and maybe even staggered start times. This is the race non-runners still know the name and date of every year. These races might at first seem to be overdone, not worth parking downtown or the traffic jams they cause at first glance. All the rules of racing are followed to the letter and truth be told they can be intimidating. But they are so special because of the energy they have, you get to see all the elites in your area and depending on where you live maybe even some famous runners. What’s cool is you are about to do exactly what they are at the exact same time. That energy might just push you to a PR which is pretty neat. These races are a must do year after year and don’t let anyone make you feel bad about that. If nothing else every runner you meet this year was there too and now you have something else in common.

And the award goes to: Scotiabank Bluenose Marathon

The part of something bigger race

This race is definitely fundraising for something, most of the people there aren’t even running and even though you are it’s really not about running at all. The event is usually held in multiple cities maybe even on the same day. They have a universal recognizable logo or color and pretty much institutions at this point. It’s probably not even timed, These races can remind you of what’s really important in the world and all of a sudden your last PR attempt doesn’t really matter anymore. While that’s great take some time to think about the power running (or walking) together with mostly strangers can bring you all together for a bigger cause.

And the award goes to: The Terry Fox Run

The race that doesn’t take itself too seriously

Sure somebody’s going to win but it’s not most of you out there and it’s not the lottery so… To qualify for this category there has to be a reason that they should be taking themselves seriously but they aren’t. Maybe it’s the fact it’s a qualifier, a big corporate sponsor or that it’s just a triathlon. It just seems no one told the organizers that. The race that I’m thinking most about here is a tri. Now triathlon people and races generally take themselves too seriously and if your goal is to just live to the end it can make you feel really out of place. Races in this category are either just really chill or at least acknowledge that they are there for the 90% of non-elites too. In a category where having a cheerer say the wrong thing can get you disqualified it’s a breath of fresh air to hear the race director say “If you’re really miserable out there, just come in and finish, just don’t come in first.” These races are special because they are the perfect place to do something that scares you and clam your race day nerves.

And the award goes to: Melmerby Triathlon

The race that’s actually about something else

Sometimes it’s a theme, an underlying cause, a given holiday or a big idea. Maybe it’s dressing like a pirate, running in a historic place or women’s empowerment. These races usually include more than a moderate dose of camp. This race is different from the ‘part of something bigger race’ because charity and fundraising is very much secondary or absent entirely. In this case the race and the running is just an excuse to get everyone together for a moving party. In these races the race director’s vision is really what it’s all about! Their passion just happens to come out in running form. Even though you’re tiered at the end you leave in smiles and full of energy swearing you’ll be back again next year and every year after that.

And the award goes to: Sole Sisters

The race that asks for nothing

Races that ask literally nothing of you might be the unicorn of the racing world. I’m only aware of one so let’s say this might apply to your local run club too. Even though race day costs money no matter what this race doesn’t cost you a penny but somehow still provides you with all the support you need and maybe even some race day perks. I think we all have a race we’ve had to skip because of finances on some level. Disney princess half marathon anyone? or maybe one even closer to home. It could be cash for registration, the need to travel or even time away from work but having to skip a race makes you realize how special these unicorns are. I’m pretty lucky to never have to think twice about local races and semi-local races but like most runners jet setting around the world to run the world majors is beyond my means (and ability). I get that money factors into a lot of people’s decisions more than it does for me and that makes a totally free race extra special for all. The reality is that these races have to be sponsored by someone, have PR ramifications and are very likely branded in some way. In order to stand out in this category the perfect race doesn’t make that what the day is all about.

And the award goes to: Michelin Tire Trot

The race on the calendar when there are no other races

Have you ever felt itchy, unsettled and like your life is lacking meaning and purpose? Me too!!! Sure you could dig deeper into that feeling, do lots of hard work in years of therapy or you could just sign up for a race. All jokes aside race season is a real thing and outside those few months it can be hard to find a way to scratch that itch. I mean is there even really a reason to workout if you’re not going to get a medal for it in the short to medium term? Other than helping with your everyday background level of ADHD these races are special because they really do help to keep you motivated when you otherwise might not get out there. They actually help keep you healthy, consistent and in shape year round and at least for me do at least as much as any new year’s resolution ever will.

And the award goes to: Frostbite 5 Miler

As I get ideas for posts I write them down in a list then place them into my calendar. When I had this idea and scheduled it I thought that I would be writing the recipe for the perfect race. But it turns out I just couldn’t choose! They’re all special in their own way. What’s your favorite race and why? Or just your favorite category.