Last year I started doing race recaps and last year I did all those fun races I always wanted to try as a goal after triathlon training fell through, well the race did anyway. But The Frostbite Five Miler is actually one I’ve done before and it was lots of fun! It’s actually a really old established race that had a name change a few years back so there are usually race photographers there! It’s also for a good cause but what got me last year and made me want to do it again is the super cute snowman medal. Last year it was postponed due to snowbanks on a warmer day and we ran in March on a VERY cold day in march. Actually last year blogging this was the last race I didn’t write a recap for, so I figured I would write about it this year.

A bit about the race: The frostbite 5 miler is held each year in February and collets food and donations for Beacon House a local food bank and all the proceeds go there too. It’s put on by the Lakeshore runners and run Nova Scotia and I believe it used to be called the baked bean run. The run itself is around first lake in Sackville and I remember it being pretty residential last year. Sackville can be a bit colder and snowier in the winter and last year it was put off due to high snowbanks but since last year the city has added a divided paved sidewalk/bike paths so that shouldn’t happen again. It’s hosted at Sackville High School so you can wait there in a warm space to hang out before and after and any cheerers can hang out there too. This year I think there is a bit of an expo planned for the race. As always there is lots of snacks including hot soup and coffee to warm you up when you finish. And a few races and other fitness-y people had booths set up. The Harvard auto van is always there to take donations for Beacon House and the goal is to fill it people. Check out the facebook page for the race the week before the race for the current list of most needed items ( I brought granola bars). It is timed by Atlantic chip and there are at least one water station on route. The race is $25 for a medal or a mug or and extra $5 for both which is what I did. This race has a really chill vibe but it attracts a serious running group. Maybe it’s just that the last two winters have been terrible weather on the day so only the fast kids showed upon that it’s hosted by a legit run club. I’m reliably in the top half of results but not at this one.

Parking and weather: There is ample parking at Sackville High School really close to the doors on Kingfisher way and officially at Sobey’s but I think last year I parked on the far side of the lot at Sackville Sports Stadium. Since it’s a February race in Nova Scotia you should be prepared for anything weather wise. Last year -22 degrees Celsius with the windchill and the year before plus seven so I basically wore all of my running clothes to the race in layers last year. This year it was right about freezing and snowing with a stiff but not terrible breeze. Most of the snow had fallen in the morning which made the sidewalk portions pretty slick, in the streets it was almost totally clear.

Cheer squad: Not applicable, sad face :(. Not really but sort of. Honey usually comes with me to all my runs but I have to work right after this one. He did ask about my race but the happiness in his fake “oooooh no, that’s too bad…” Then he told me about his super fun Sunday plans instead. Officially I’m a big girl and I can go to races on my own but… I really like having him there and sometimes it feels a bit anticlimactic. Truthfully I like having someone there to take my pictures before and after even if I roll my eyes. I did go by myself this year and I was okay with that this year since I had to work right after. A lady came up after and thanked me for unknowingly pacing her and pushing her at the end and that was a pretty sweet surprise.

Logistics and support: This race is really well organized since it’s got a long history and it’s hosted by a run club. This year they had all the hand made Bristol board sign in charts there dating back to 1993. There is a volunteer at every intersection and one water stop at the half way point. Even though it’s around first lake there really isn’t a whole lot of lake views. The course is pretty hilly but doesn’t cross into the territory of brutal. 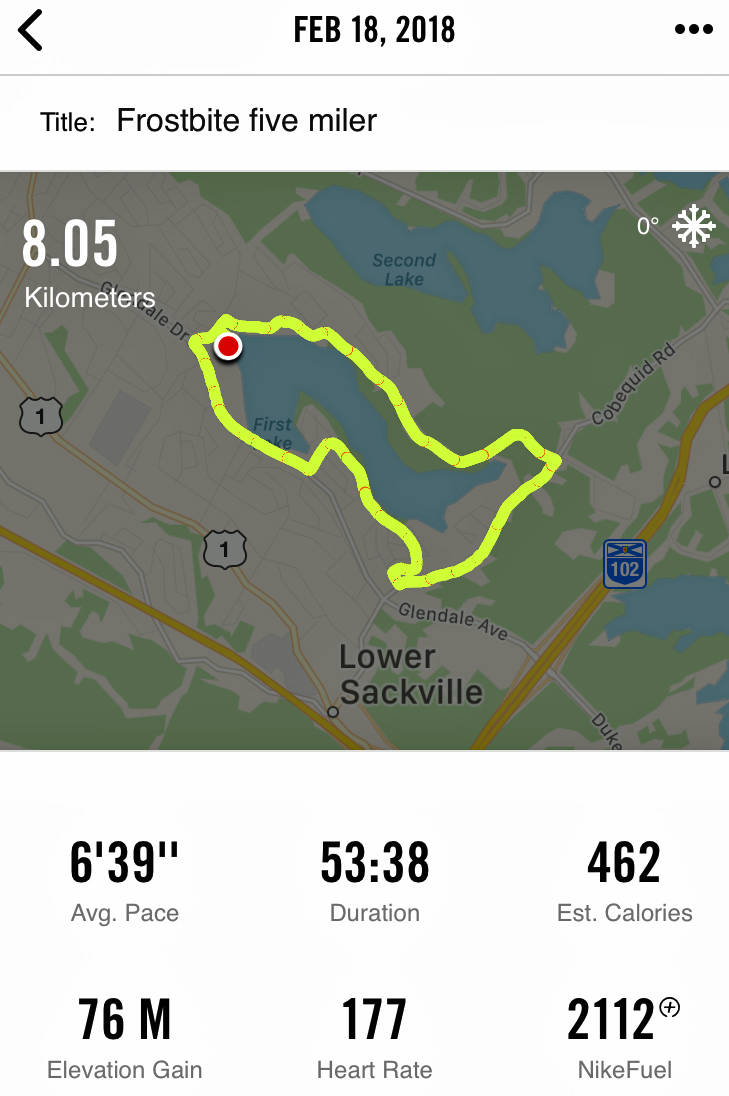 Race goals: Aquire a second super cute snowman medal. Last year since it was so cold there were a lot of leftover mugs and since it was so cold I bought one as a reward. This year they announced the mugs were big again. WHAT???! I love me 600 ml of coffee at a time so yeah check that box and take my money. Oh right, running goals… Not a whole lot really but this race is still integral for my upcoming season. How can that be? Well it’s 8 km not a little 5k but not a 10k either and since it’s in February it sort of keeps you going through the worst of winter. Our big regional race is Bluenose the long weekend in may and this race is 13 weeks to the day from that. I’m really seriously toying with doing a 1/2 at bluenose this year, like building a base to start that training plan next week, serious. So the frostbite five miler is the perfect motivation to build from for Bluenose each year. Get it done and it’s the same distance as my long run next weekend. So basically to get me physiologically ready to take on 1/2 training, again! PS for training I will be adding a short Tuesday post to keep everyone updated so subscribe to stay in the know.

Swag: Medal and a mug, both with that really cute snowman wearing a scarf. I made sure to hang him next to his friend from last year so they can keep each other company. Last year I bought the mug on the dat to commemorate my super cold run and I keep pencils in it on my desk since standard size mugs are way too small fo coffee in my world. So when they announced that this years mug was boing to be big, I had to grab it! This year the bibs had a built in chip rather than last year’s ankle bracelet.

Results: I feel like I was pretty consistent the entire run I just wanted to cover the distance. I didn’t want to tucker myself out too much since I had to work tutoring for a couple of hours later. I felt like given the conditions I had gone pretty fast but my group placements were lower than average, so obviously everyone else was just super fast. I decided to wear my old Adidas trail runners for grips even though they’ve been blown out of the water my my new asics.

Looking back: I love this race for what it is and established, charitable, well organized race in February when the event calendar is looking pretty sparse. It’s the perfect way to kick start your spring training a bit early on your way to a bigger event at Bluenose which is also an early race.

Next up: Bluenose weekend, start looking for weekly 1/2 updates on Tuesdays! Have you done the frostbite 5 miler? Is everyone fast every year?