Week one check! This week I’ll be talking about my last runs of freedom and my first week of training. Yeah! This year we haven’t had much of a winter it was Juneuary, followed my no February so hopefully that continues into March. We have literally no snow on the ground, I saw like one square foot of plowed driveway ice today in 12 km and I was like what the hell is that? Global warming scary but running in shirt sleeves and skirts in February in Nova Scotia = Awesome! So I figure these posts will be heavy on the pics and a few sentences for each one! 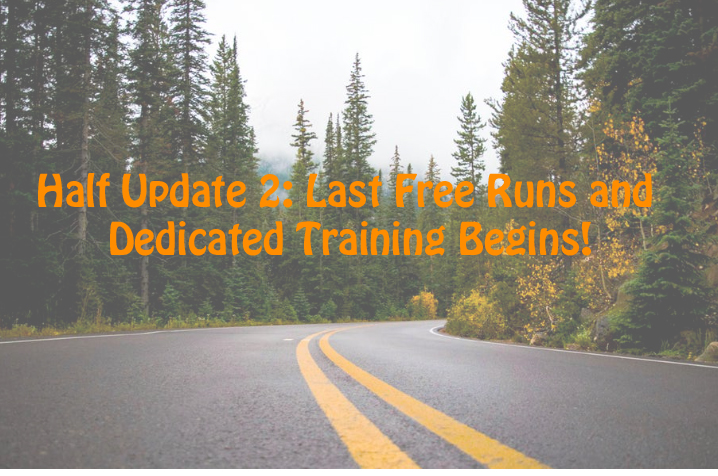 I’ve done a few training programs in the past like 8 but this is the very first time I’ve felt myself cherishing those last few non-prescribed training runs, is that weird or do you do it too? Like REALLY enjoying it! I can say this now because they’re already home but I’ve been taking care of my mom’s house while she’s away. So Saturday we ran out of barn board (I made en masse stay tuned for a post) at work so I had time to get my long run in while it’s 8 degrees instead of -3 tomorrow. I decided to run down to mom’s house and this time I remembered to take my key! I wore a pair of Joe Fresh chevron mesh cutout leggings my sister got me for Christmas for the first time which I will link if I can find them (on sale for $10 now). They were surprisingly okay given all the extra seams they have if a little big. I’ve been seriously impressed with Joe Fresh gear over the years so check it out Canadians next time you’re at the grocery store. I love, love, love the kids sports bras in large, and the bottoms in xs especially if they have the inside the waistband adjuster thing. Side note the vanity sizing here is a bit out of control so be prepared to go down a size or two, or to the kids department! Overall the 11.5 km run was great if a little fast for a long run. No knee issues and loverly!

Then my last Sunday funday run day with me choosing the length turned out to be not all that long since it wan’t all that warm. I really should have added a jacket to that sweatshirt! I was expecting it to suck a bit after my faster than planned and longer than I’m used to run the day before but it wasn’t bad! I’ve mentioned I use the Nike Running Club app and every Sunday they do the global 5K challenge on there and I try to participate as often as I can. It’s really cool to log in and see 800 000 people have already joined you, sort of. Nothing special about this one just a nice run and my last free one!

Tuesday: 5k run at the crack of freaking dawn! I got up at 6:20 am ewwww and yes there is one of those in the morning too! It’s going to have to happen a bit if I’m running the Bluenose 1/2 this year. In the past I’ve opted for later races so I’m not tutoring in the evenings while training in the summer. I decided to leave a note for Richard “gone runnin’” next to the coffee maker in case he got up since at that hour he would probably assume that it was the first kidnapping in the bay possibly in history. I’m totally spoiled to live in such a pretty place and I’m told this sun rise was totally run of the mill at the end of the driveway. I’ve seen like 12 of them in the last 6 years. Wasn’t that bad really but my 6 am coffee was fully worn off by 10!

Wednesday: 6 km hill repeats. I HATE Haggart’s Hill because it’s where all the cool kids partied and camped in high school and I never got invited. But I did secretly spy on Richard’s kids to make sure they were okay and I clean it up once or twice a year. It’s 1 km into my favourite loop and if I’m doing more than 6 I’m usually walking at the top. It’s about 500 m (.3 miles) long and 32 m (106 feet) high, I did it 5 times in a row. But other than huffing and puffing it was a great workout. It was leap day and 11 degrees Celsius (52 f) and I got to run in a skirt. For reference the average temperature is 3 degrees or about 35 f so that made hill repeats sort of okay. At least they’re not on the plan for three more weeks!

Saturday: Just a 4 km shake out but I did accomplish a long time running goal, run to the pizza shop, order and have it waiting for me when I get home. Win!

Sunday: Long run day super sucked!!!!!! Not because of the weather, grey and dull didn’t help or the distance, did 12 last weekend but because I got NO sleep the night before. I went to bed early at midnight and honey woke up at 1:20 am and woke me up too. I laid in bed wide awake and looked at the ceiling until 2 then got up and wrote until 5:30 am, laid on the couch and stared at the ceiling some more until 8, so an hour and twenty minutes of sleep = a terrible terrible run. It happens but almost a guarantee the next one will be better. Worst run in months!