This week I’ve been trying to make the idea of something being penultimate a thing. It’s had some mixed success. In half marathon training plans there are a few (in my case 4) really hellish weeks before your taper off and rest usually. From past experience I’ve found that last week to be empowering, a great push to the end and easier mentally as you can say things like that’s the last crazy long interval run on a Tuesday night! So this week I’ve been trying to get excited about second lasts too. How has that been going? Meh. If pressed I would say alright I guess. My knee has been a bit sore and scheduling in all this running has been getting a bit harder. Thankfully it was a very light week at my evening job and they days are getting mighty long. My blister’s are betting better or at least not getting worst save for a new niggle on my right middle toe end. All in all it’s been an average week.

Tuesday: 13 km tempo run: The forecast and an unusual Tuesday night off meant it was time to wedge that (let’s be honest long) speed work run into the schedule. Unfortunately that meant that I didn’t really get to spend time with a visiting military friend who just returned from overseas. At this point in training it’s not unusual for you to be getting slower and slower as those miles add up and you’re getting tiered. Surprisingly i managed to hammer this one out pretty fast after a late program long run. My knee niggled at me which I’m putting down to those concrete miles last week. Pizza and an Epsom salt bubble bath waiting when I got home was awesome! 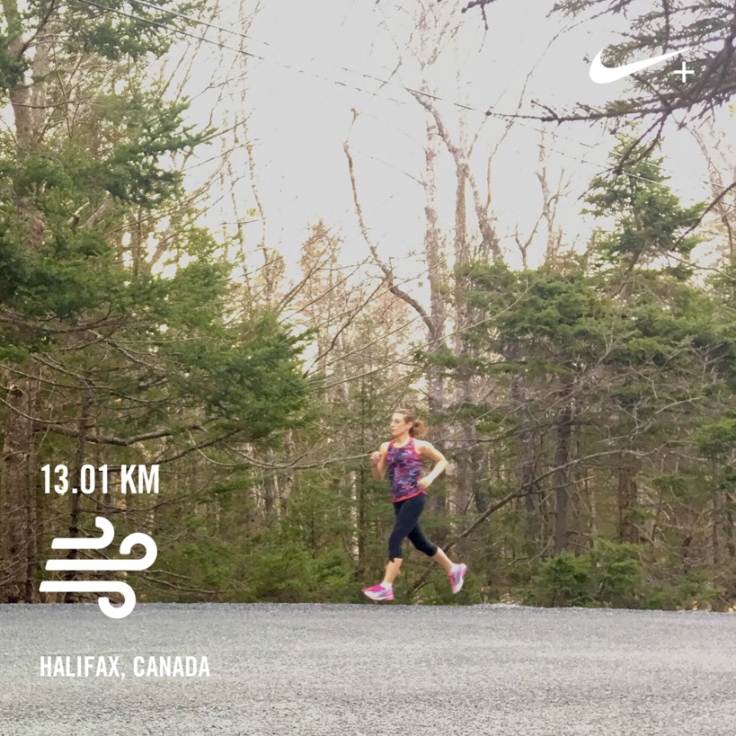 Wednesday: 6 km recovery run: This cycle I think I’ve found a secret about recovery runs. Do them after about only 12 hours has passed and they barely hurt at all. This was another sunrise run with my trainee in winter gear. His schedule called for 25 minutes of running straight. He did it no problem, I told him that since his 5k is in the afternoon he should try to log some higher temperature runs. We also talked about the fact that if he can start running at 68 after a stroke anyone can do it. 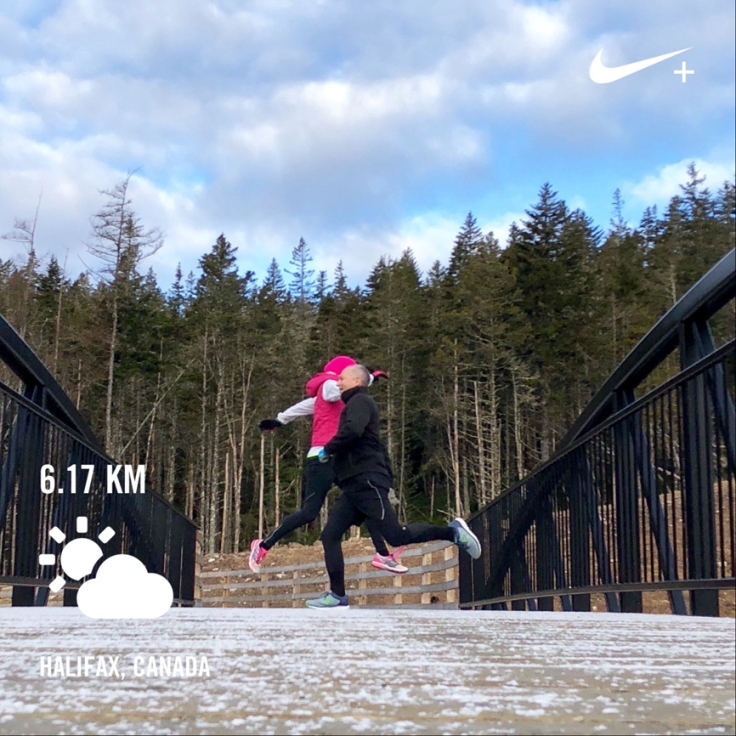 Friday: 7 km shakeout run: Since Thursday was a very, very wet day I decided to do my run on Friday and we ended up working until 10 and working hard. I went with my stepdad and it was another 25 minute run day but when we posed for our picture someone, who knows who, turned the volume down and his C25K lady didn’t tell him to stop running so he must have done at least 28 minutes straight! Then I did three more on my own. We finished up a 6 month job on Friday so it was an extra amazing run feeling like a big weight was lifted off. It was actually a great job, took us through the winter, for great people, who are also great customers and friends too. But we’re definitely used to moving on more often then this. Plus this one wasn’t terribly sexy for the most part. Sure there was a store re-do and workspace but there was also 60 yards of gravel under a building, four I beams and a lot of jacking and a used grease pit. But there wasn’t much of a stunning before and after unless you count the fact that the building isn’t likely to fall down anymore. Needless to say I felt lighter being done! 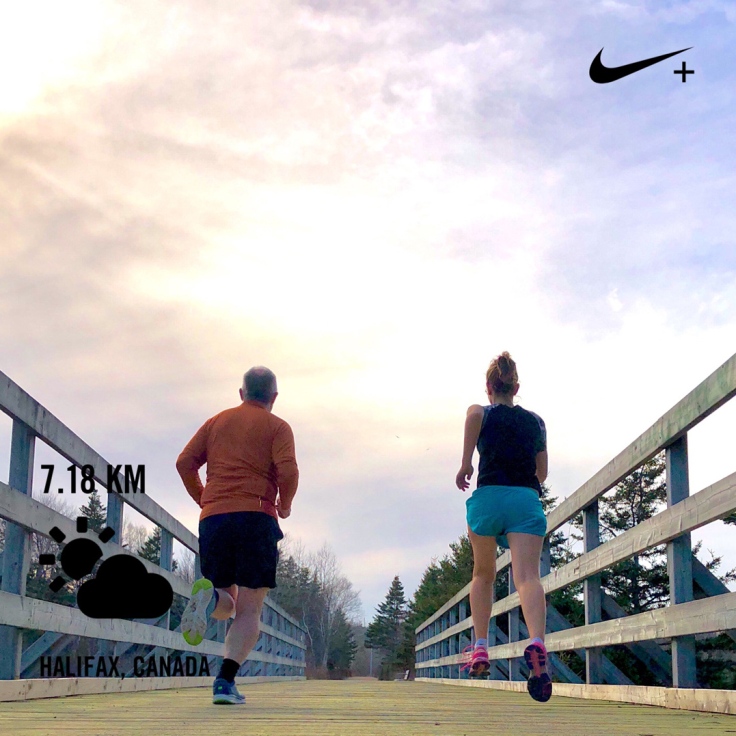 Saturday: 6 km leftover run: I didn’t do this one! I finally skipped a run this training cycle. I was all set to do my long run in the morning, shoot my sister’s maternity photos then head to the local high school for their annual musical. But lighning in the morning dearled my plans and I thought I would at least get the 6 k in. Waiting around for a photoshoot based around a toddler’s schedule meant it just didn’t happen. It was probably for the best since my knee had been getting better but it wasn’t perfect. I had this delusion that I would go at ten after the play but a second supper meant that wasn’t going to happen.

Sunday: 22 km long run: This one had me in my own head and I’m not sure I can exactly say why. It was my longest run ever (by 0.7 km), it was a half marathon on my own or maybe just because I’m running out of steam. When I’m running, especially during long runs, I’ll often count up in percentages until the end. Setting out to count the kilometres off 4.5% at a time seemed like it was going to take forever and my sad knee was on my mind too. I dressed for the hour by hour forecast (12 degrees and light rain) so capris, a long sleeve shirt and since it seemed like it was getting a whole lot nicer than it should I slipped my race day tank on underneath. My mom lives almost 6 km from my house and it was getting warm fast. I took my wool shirt off and I could feel my shoulders starting to bake. For the first time ever I called in for support on a run. My mom put out some sunscreen for me and I left my heavy shirt there. After that it got pretty cloudy again but it’s always better safe than sorry. The run ticked on fine and I really didn’t have any knee pain at all. That extra rest day did me good. Next week is peak week and it’s always a tad easier to get your crazy end of plan runs in when you know it’s the last one. Last training cycle I learned a lot about life and lots of practical running tips too but I reel like I’m learning a lot more practice type things this time. Say tuned for a post in early June all about those second time around tips.

6 thoughts on “Half Update 10: Penultimate Hell Week, Trainee is Officially a Runner!”