If you’ve been around here for a while now you’ll know that when I train for a big event, yes the big one of the year, it rains on race day. We’re not talking a gentle drizzle either! Both halfs I’ve run have been during heavy rainfall warnings and that olympic this year during the bike leg I had to slow down because it was raining so hard I couldn’t see through my glasses. Like normal people I avoid running in the rain in training because I’m made of sugar and spice and everything nice and I’ll melt. Sometimes it happens though so how do you do it?

Now running in the rain isn’t all bad though it’s hard to get out the door but once you do you feel like a super hero. You’re way tougher than all those other runners sitting at home on their couch. After a stretch of hot weather running in the rain feels like a cold drink and really refreshing. If you happen to be running on anger that superhero thing truly adds to the experience. There are however some practical things to consider so if you’re staring down a race day forecast full of rain this is what you have to know! 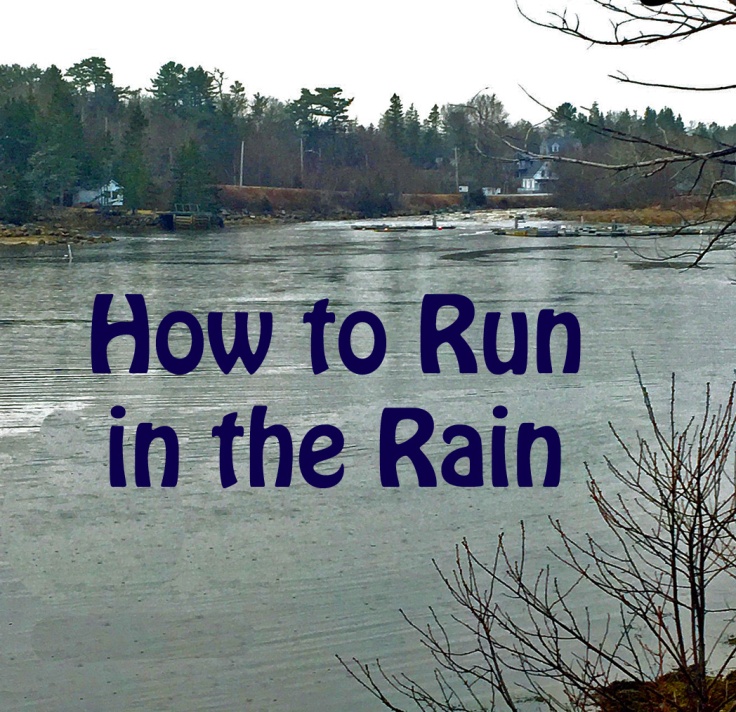 Imagine running a whole 10k or gasp, a half marathon without your music or pacing, not an option right? Ideally you’ll have an old phone with your favorite running app and playlist added to it for rainy runs and races. I’ve had that option in the past but now my old phones are too rough and we just use them for home security. A cheapish pair of  earphones with wires are your best bet but sliding your phone into one or two zippy bags will keep it bone dry in your race belt. Just zip it as much as you can and fold it over. You can even use the touch screen through the bag. However you might want to be a little more zen about the song that’s playing. There are other more sophisticated options like those arm bands and special bags but last minute in a pinch zippies work too. If you do buy and test a more sophisticated option might I suggest bringing one of those ziplock bags the first time just in case reality falls short of expectations.

Chaffing might crop up for the first time ever

I’ve never dealt with chaffing even in the rain but I’ve been prepared for it. Even if it’s never been an issue before wet weather can make it a thing all of a sudden. If you have had an issue in the past get ready for it to step up a level. If you have dealt with it in the past you know the hotspots for you. Add extra of a product like body glide or similar but Vaseline has been proven to work almost as well. If you know it’ll be a problem consider taking it with you to reapply. What I do is fold some petroleum jelly in some tin foil and keep it in my running belt or bra. That way if a bra strap, blister or southern issue becomes a problem mid run I have a way to push through.

This is best in summertime because you can get away with less. The ideal rainy outfit is tight short shorts and if your female a running bra and that’s it. However that’s not always possible. Tight is better than loose because there is less fabric to get heavy and tug at you plus loose bits tend to flap around and send streams of water running down you body. I have done it around the freezing point and it’s not great but with the less is more approach in mind I highly recommend this tool from runner’s world. Sometimes I’ll even do harder workout because it’s raining just so I can wear less clothes.

I do not have the secret to this I’ve tried bags, those suck. But less is more here too thinner socks are a good way to go. Honestly it’s not that bad once it happens but as they get wet is sucks. The first few squishy steps are gross and yucky but you adapt and forget about it pretty fast. During one half one shoe was soaked and the other relatively dry and I decided to just run into a puddle to even them out. It was the better choice because before that the unevenness of it was driving me nuts. You might find once wet your shoes and laces stretch a bit so you might want to re-tie them a bit tighter as they get wetter.

Stay dry as long as possible

It’s very possible that this is entirely phycological and all in your head but it really does help to stay dry as long as possible. You can sit in the car until the very last minute, have a throw away sweater or even wear a trash bag with head and or arm holes as long as you want to.  Running races usually allow you to throw things out at the start on the course but you can’t in triathlon. It’s best to check the rules for your specific race first. For a rainy run on your own if you throw something out make sure you drive back later and pick it up. Don’t be that runner!

Pamper your cheer squad and put them to work

Pretty much every time I drag people out to stand in the rain and cheer me on I keep asking was it raining like this the whole time in disbelief while they assure me it was! The thing is once you’re doing it it’s really not that bad. It’s actually much worse to stand in the rain than to run in it. Make sure your cheerers are happy by bringing things like umbrellas a thermos of hot coffee and rubber boots to make their stay more comfortable. If you’re going to be a while a gift certificate to a breakfast place would go a long way to boost morale on the big day too. One half that I ran had a strong purple and tutu tradition and since I already has a purple running skirt I wanted to wear it. However I had honey make sure he was there at the halfway point so I could ditch it if it was getting too heavy and wet in the rain. If you have cheerers there they might as well be available to hand you things in case you need them like a sweater. However this is a big no no in triathlon and you could get your athlete disqualified for receiving support from outside the course.

Running in the rain just isn’t as nice as a coolish fall day with perfectly pretty fall leaves falling all around you. It’s just not and that’s fine. There are certain aspects that are uncomfortable and just kinda suck. You could sit and dwell on those aspects or you could just build a mental bridge and get over it in the moment and do your best to enjoy your run.

Change as soon as possible

As soon as possible change out of your sopping wet running clothes because it feels nice, you won’t be as cold and it minimizes ‘issues’ you might have. Change everything right down to and including your skivvies even if it’s in the back seat of your car. Technically that’s not that legal but I’m thinking in the scenario no one is likely to give you a hard time.

What are your number one tips for a successful rainy day run or race? Do you also avoid it in training as if you’ll get instant phenomena for training runs and dive in head first for races?

5 thoughts on “How to Run in the Rain”