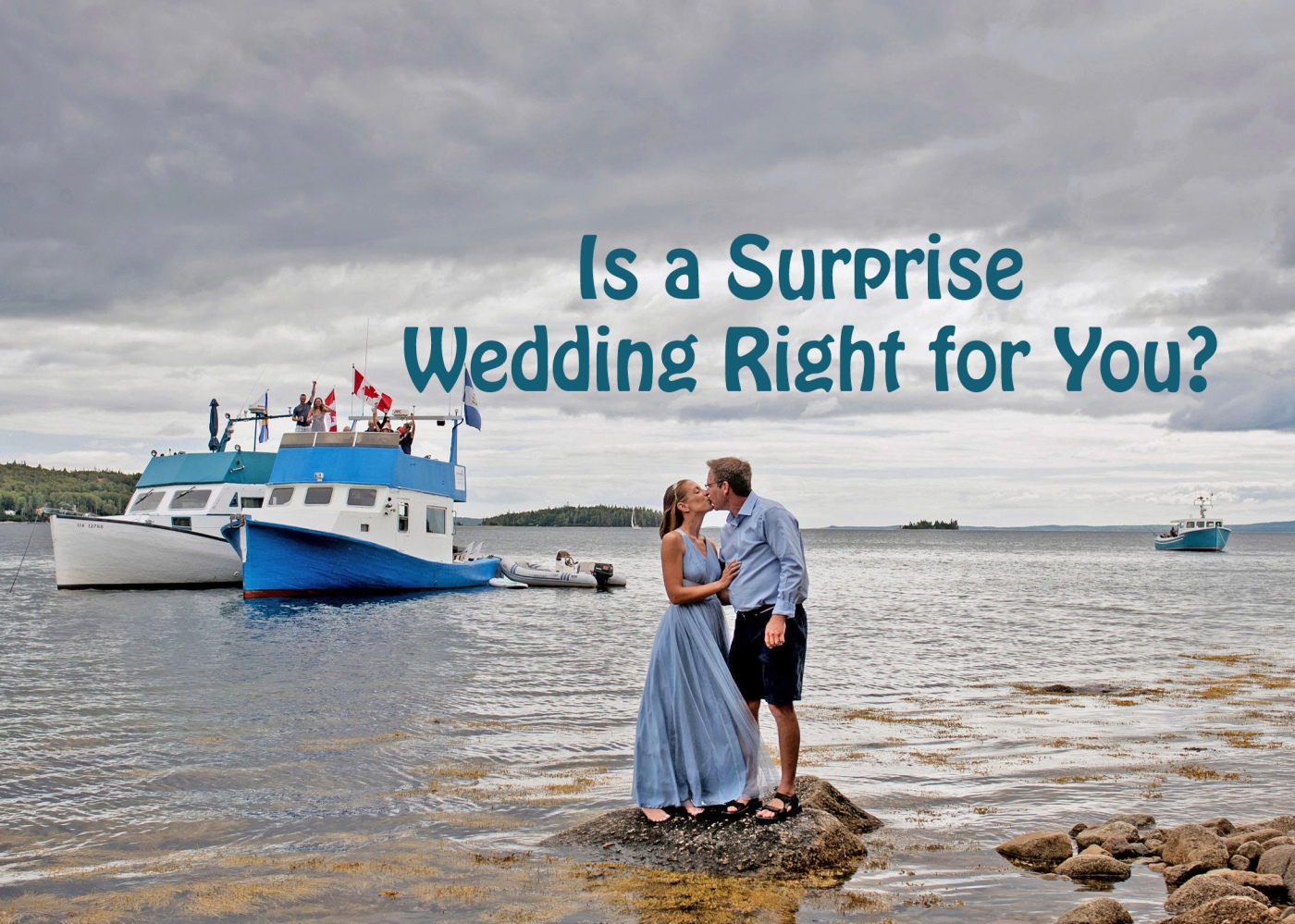 Over the summer we got married and it was a surprise wedding. I was at one years ago actually not as a wedding guest but anyway that’s not important, and I thought it was the coolest energy ever. That event was way more traditional than ours but ever since that day I knew it was something I might be interested in. It appealed to me because you got to do it your way but mostly because I thought you’d get to skip ALL of the drama with people before the event. I did realize that it might upset some people and it did, but at least now I’m happy with our choice. PS all of the photos are by thisisphotography go check her out. I didn’t find her this way but she specializes in elopements and non-traditional weddings as well as the regular kid as well!

It seems surprise weddings are having a bit of a moment in the social media world and let me tell you that IS NOT a reason to do it and it’s not all sunshine and roses, actually you probably won’t get any roses at all. There are people it’s a perfect fit for and those that it is just going to make them feel like they missed out. Honestly I’m not sure it’s for most of the people out there but if you’re considering it these are at least some of the things you should be aware of. We’ll go through the pros, cons, who it is for and isn’t and why it was a good choice for us along with the hard parts. However we’re going to start with the negative first because I think that’s important and then get into the good stuff.

Who it’s probably wrong for

Who it’s probably right for

Why we knew it was right for us

On my side of the family there are A LOT of expectations many of which just didn’t vibe with us. Lot’s of people invited, the have too’s get us to about 100, open bar is a must and a certain degree of formality is required. The thing is we don’t drink at all, we and our friends are incredibly casual people while the required wedding would not be. Basically at the wedding we and our friends would love some family members would be very uncomfortable at and visa versa for the wedding we would plan for the family. No matter what we thought to do it seemed impossible to bridge that gap. I didn’t mind the idea of being the center of attention on the big day but the idea of all the chatter about me before, during and after the wedding made me feel nauseous. I’d never been the girl that dreamed of my wedding day in detail other than it should be legal, there should be a great (non-white-ish) dress and I wanted great photos but I did dream about the way it would reflect me and the way I would feel. I would think of an idea, remember the obligations I had and then think, ‘well I probably can’t do that then’ about most things.

Honestly all that fuss (AND COST) had always seemed ridiculous to me. That was especially true since we’d been together 16 years, lived together for 6 years, had 2 homes worth of stuff at one point and ended up being engaged for a long time. Hell we owned literally 3 microwaves and a full table setting for at least 30 at that point! The money could be better used for paying down the mortgage or buying a new work truck. Thinking about all those factors I just wanted to elope or go to the courthouse but honey wasn’t in to that. Or if we did have a big wedding it was our plan to drive off into the sunset shortly after dinner 1950’s style and just leave the chaos behind. If that’s the case why would we even do it in the first place?

Doing it this way meant that we could do whatever we wanted and that seemed pretty awesome to me. Skipping a lot of the ‘have toos’ felt pretty great as well. We did factor I cost to our decision but we ended up spending way more than we originally expected. It seemed like just the right level of fuss for us at this stage in our lives and that really cool energy that was at the surprise wedding I attended years ago was captured for us as well!

The hard parts for us

It was hard in a lot of ways but of course this is just my perspective. Honey says the anxiety I had lead to a hell week from me the week before and I cannot disagree with that! We pretty much had to take at least a week off from work before due to nerves and oh so many errands. So it did make our and my work situation worse for a time. Our wedding ended up being really small at just 17 people so we put the feelers out for everyone for our ‘super special boat trip’ and my sister drug out picking days she was available for well over a week. I knew she probably would but it caused me a lot of irritation first and honey after that. I knew once she did pick she’d be totally committed though and that was the case. While she was picking I couldn’t nail down little details like the justice of the peace and the photographer which was kind of a big deal in a 4 week planning progress.

You might think that since you two are totally on the same page and in total control you won’t have any disagreements planning a surprise wedding. That’s probably not true for anyone. I had this picture in my head that we would get married on the actual boat an everyone could hear the ceremony from the top deck that didn’t match honey’s idea (or logistics). When we both realized that we were having a work lunch out just the two of us. Anyway discussing it tears started to flow. We ended up figuring out a plan which was great because it included me paddling over in my dress which I loved, but I’m not sure we ever want to eat at that restaurant again!

Since we were so dependent on the weather we tried to keep it to Saturday or Sunday for as long as possible which meant almost planning 2 weddings really. Everything had to be able to be moved the Wednesday before or alternates (like photographers) had to be set up too. That meant paying an extra deposit, letting certain things go and finding options that were more simple and moveable. Then due to the boat availability we had to commit to a few days earlier than all the other plans allowed which made me feel a little jilted at the time. The weather was better on the day we didn’t pick but… it was good enough on the day we had too, just really windy. Since we were getting married in hurricane season our ultimate backup plan was just to get everyone to show up to eat all the food we bought at mom’s house instead which would have been a huge let down and I am SO GLAD didn’t happen in the end!

One thing that irritated me a lot was the fact that honey was like “it’s simple we just get on a boat, get married and we’re done, right?” Meantime I had two spreadsheets on the go three paper lists and was doing three hours of errands and calls most days in the month leading up to the wedding. Weddings, even surprise ones, are highly curated events and even though almost nothing went totally exactly as planned on the big day (which I was cool with) the minutia had to be managed. I kept thinking sure it’s simple for you but I’m running around like a chicken with my head cut off over here, canceling my stuff and he helped out more than I thought he would! Funnily enough the morning of, he realized all the important details that needed to come together all at once and sort of panicked as it was all taken care of around him as he freaked out a little. I was totally calm in go mode but I can’t imagine that was fun for him at all!

Don’t get the wrong idea here we totally loved every moment of our wedding and planning it went very smoothly overall as well. I just want to put the harder stuff out there because that did happen as well and you should be totally aware of it if you are thinking of going down this road as well.

In conclusion we had a great day and it was pretty much perfect! Having a surprise wedding was a big part of that! I put lots of pictures in this post so you can see what the day was like! Don’t forget to check out our photographer’s page! Have you had a surprise wedding or been to one? What did you think of it? Is it something you would consider?

7 thoughts on “Is a Surprise Wedding Right for You?”