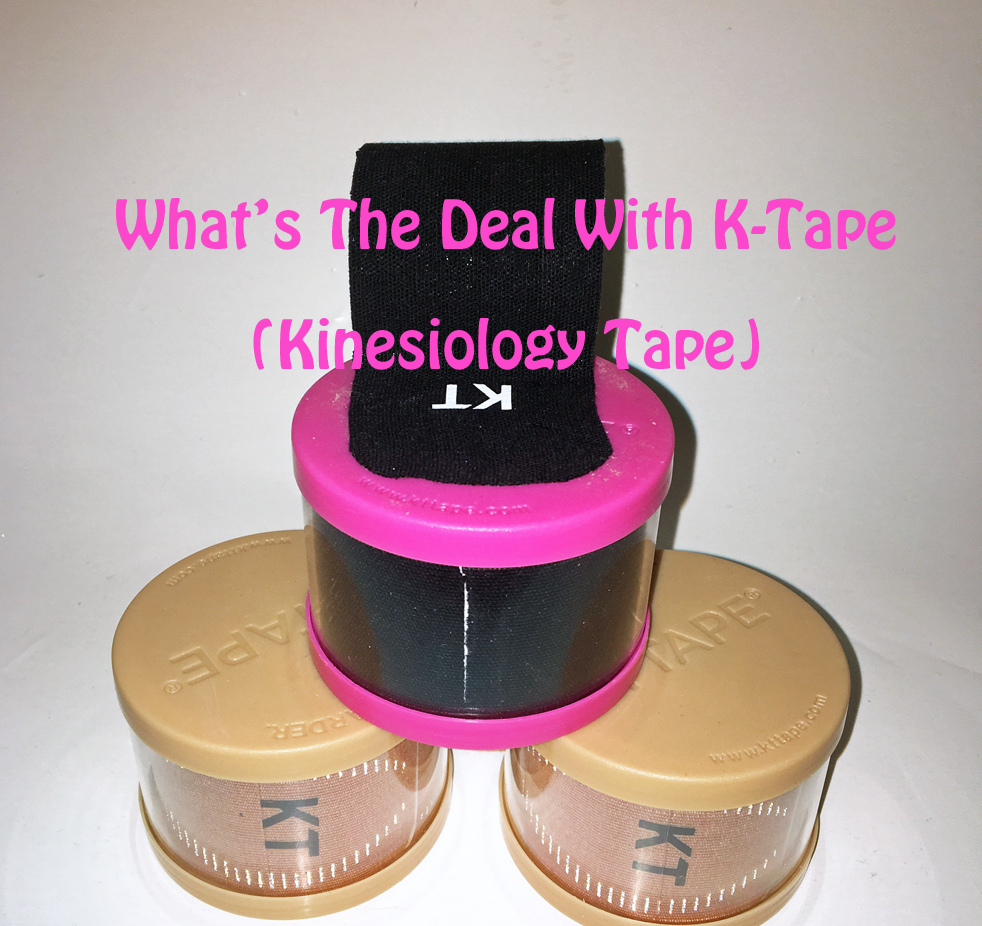 Is it the new best thing or just another gimmick? Cure all or expensive people decoration? KT tape is becoming popular among runners for sure, look around at your next race and you’ll see a few decorated knees. Is it better than bracing, less supportive or worth it’s weight in gold? Well I’ve been using it for over a month now and I have to say I do like it for my runner’s knee at least. But it’s also not a magical cure all. As it stands right now I would like to stop using it all the time in the future but I very well might strap it on for races. 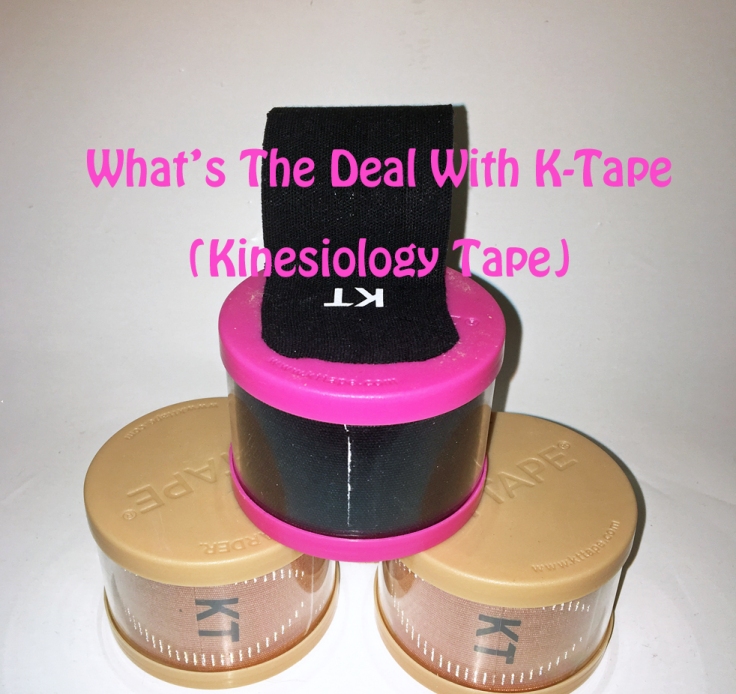 The journey to trying K-Tape (condensed)

I’ve been dealing with runner’s knee for two years now in a big way which stems back to a low speed car hit to my hip when I was 16. It really started acting up after a yoga class in May 2016 and I could barely walk after. I reached out to a friend from way back who has a PhD in Physiotherapy and she sent me a google image of exercises and told me to sit down until it stopped hurting also not to buy a brace and if I did to get a small scrappy one. Apparently I heard take it easy for a month then tackle the half marathon, with a strap brace. Then that stopped working so I got a giant brace and this fall that stopped working too. So I decided if I was confused others might be too. I looked long and hard into the science and what experts say about runners knee, braces and best practices from people who are actual experts. In that process I found out that K-Tape is definitely recommended over braces, so I listened and gave it a try.

Remember that friend with the doctorate in physio she says it is in fact a thing but that it’s not a replacement for exercises designed to actually heal you. Since it’s a thing she gave me the green light to use it as I maintain a couple of runs a week and focus on doing the exercises. Because when I return to running after a break my knee goes back past zero into the negatives. Then I asked honey’s bestie who just got certified as a physician’s assistant, “people decoration or a legit thing?” He assured me it’s a thing and his dad was covered in it for his shoulder currently. Alright time to invest.

How I’ve been using it 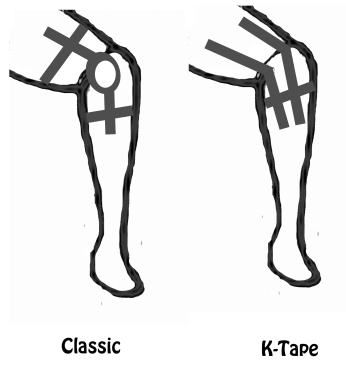 By the looks alone of the thing I though that the classic way was the method that would work best for me. Probably since it looked the most like a traditional brace. I wore my pink K-tape applied in the classic method for this year’s red nose run first. So about 6 k all tolled, and I thought I might have been duped. The next time I used it I applied it the K-Tape way, not well mind you, and I was sold. My result the first time was clearly not a dupe for the instructional video and it still worked really well. After that I felt that I did better in my application and it helped even more. Since then I’ve been wearing to for every run and doing my exercises too, and running brace free! Since it’s pricey, and my knee can be a bit worse after a run I leave it on until the next bath time.

I want to say this is just my experience and yours might be different than mine plus I’m just a runner not a medical doctor so…. I really like it. I don’t feel that it gives you the same level of support as a brace but that might be a good thing. I would say it acts just like a touch of knee magical pixie dust which I will elaborate on. When I wear the tape it certainly gives me a bit of a support security blanket. I can’t necessarily point to it and go there, that’s the spot that feels more supported but overall things just seem to be held in better. In terms of results I was really dialing back my milage after my brace started hurting me like 4 km at a time only with lots of walk breaks. Between that and doing the exercises I think the longest run I went on was 11 km. Perhaps more telling my knee hasn’t been acting up after runs (as much) and some days those short ones caused me to want to sit for two days after. Another marker for me is I like to sit at night with my knees up on my desk in a deep bend with pressure and after taping and a run I can. So the results have been great!

As for the actual tape it stays on better than you think, and I never applied an hour before as suggested. Every run I’ve worn it under pants or at least capris. On that 11 km run one piece did come unstuck but it’s been cool outside and I haven’t used it on a hot run. Also in the sticking to me favour I’ve been shaving above the knee now that I’m using it and skipping the moisturizer in that area too. Ripping the backing off makes application a breeze as you can see in this video and figuring it out wasn’t a steep learning curve. It’s also not super painful to remove but it is tape after all. Finally when I’m wearing it I can barely tell it’s on which is not something you can’t say about braces! Also not worth a whole lot of points it’s kinda pretty, it comes in a lot of colours for the people decorators our there. I’m actually saving a few of each colour for ‘special racy’ occasions.

This shiz is expensive! It’s sold in stores two ways either with a plastic puck dispenser for about $21 or without for $16. There is also a hella expensive pro extreme version. Either way you get 20 strips. That means 6.67 uses per so between $2.50 and $3.50 per application and it’s about the same online unless you want to buy in super bulk. Perhaps an option if you want to be a dealer to your sporty friends.

Next and this is minor… but as I get older poor design bothers me more and more. When you buy the cheaper no dispenser version it DOES NOT fit in a puck you already own with out taking a few strips off. Simply because the inner cardboard roll thingy is a bit bigger. UGGG my first world problems are so real right now!

Lastly you are supposed to stretch it a certain percentage, but not stretch the ends so they stay stuck. Not easy to do but the videos do try to show you how. What I’ve been doing is trying to a certain extent and adopting a ‘good enough’ philosophy and probably no harm done. I don’t think it’s worth springing for the super expensive stuff with stretching guides for that reason.

I’m a gonna keep using it every run for now. My knee is still far from healed and while not sore exactly its still mighty twingey. Once I can sit in full lotus at night like I used to I’ll reevaluate that. But for longer or faster races I might very well always use it. At the first sign my knee is acting up in the future I’ll probably pick up a roll. PS my super step dad picked me up a couple of rolls so I’m set for a while now! However he assumed I would favour the subtle, subdued nude colour and I’m more into the vibrant, loud people decorating colours but I guess I can deal. #firstworldproblems.

Have you tried K-Tape? What did you think of it, especially in the longer term? Any tips since I’m a new user. Finally if you bought in bulk and are dealing the stuff, cut me in!