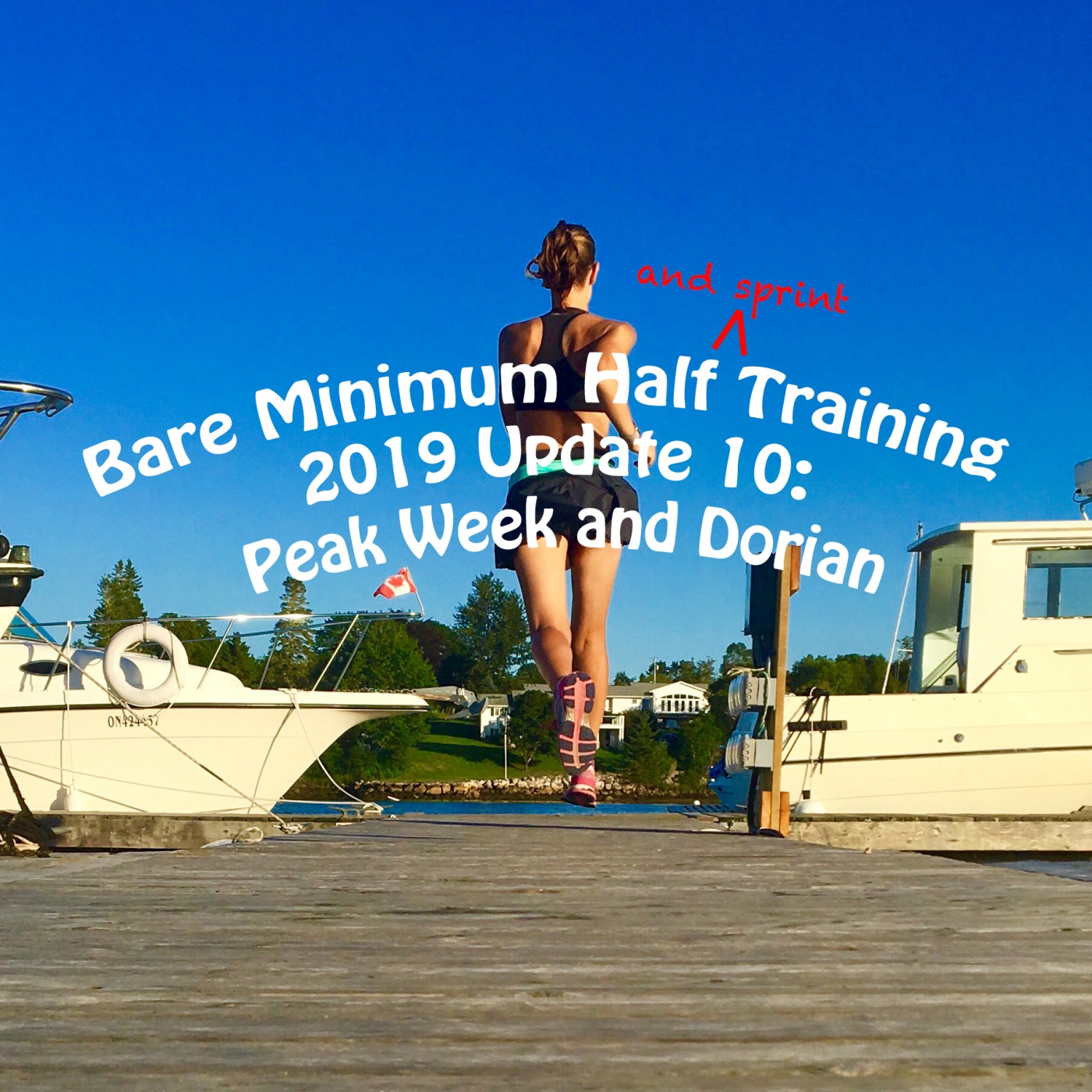 Have you lost track of my training because I have. One would have to say that peak week pretty much didn’t happen but then again it sort of did… Anyway here’s a quick recap of getting here. I was on track until week 8 when I got married. Previous to that I was extending my long runs a bit hoping to get to 20 km instead of 18 for the longest one. The week after I was about 3 days behind and I was just picking up where I had left off. Okay, that then brings us to this week and Hurricane Dorian. Dorian messed with my $hit, big time this week. I was sorta kinda planning on doing that sprint this weekend but I hadn’t registered yet. One look at the forecast and that was a big no thank you. It was canceled anyway… We spent long days Thursday and Friday getting ready for the storm, moving floats and cutting trees and by Friday night I was gathering supplies for us, heading to three gas stations that were out of gas and getting home at 10. The storm was forecasted to hit very near us as a category 1 with sustained winds of 155 km/hr. Shortly before it hit, pretty close to us it was upgraded to a category 2. Needless to say I didn’t get much running done since then either. So here’s an update of where I am heading into this half running wise and how we did in the storm.

Thursday: So we’re getting a hurricane this weekend and it’s messing with my training. By Thursday I was getting stressed about getting some miles in before the storm. Since running at dawn no less than two ships have shown up in the bay out my window to ride out the storm, so that’s not helping with the anxiety. I got up way before dark to hit the road and get those boxes checked for the week. This was the first day running after my first ever two-a-day. I’ve read that it really helps with the next run. It did not. I almost never feel tight or run 8 minute km anymore unless there is ice involved, I did both this morning. Even as I was under way I still didn’t know which distance run this week I was running. Sounds weird right. Well I’ve decided to make my last long run 2 km longer than the plan states and I didn’t want to go over that weekly milage although Dorian is kind of making sure that won’t be an issue now. And that’s all the running I did this week! Last week I did publish my training update late because I sort of shifted the days of the week in this plan after the wedding but that was it.

Where I am heading into the race:

Weirdly, I’ve sort of skipped a whole week of training (3 runs) and am also right on track for the plan. Here’s how that’s possible. I was already planning on not doing my speed work this week because I needed the break, but my last speed work was 11 km, just as long as this week called for. I knew I needed the full week of taper at this point since I’m used to tapering for two weeks before a half so happy accidents right? Since I had extended some of my long runs hoping to get to 20 km for the longest I’ve already done my longest run exactly the length that the plan call for the longest one to be. I was feeling like a week of taper just wasn’t going to be enough this time so Dorian and being a bit behind before that made that work out for me. I will be sticking to the schedule for taper week though, I swear my intentions are good.

How we faired in the Hurricane:

Overall personally and as a province we did quite well. It was a serious storm with serious effects it was less powerful than others in the past but the effects were much more wide reaching. 85% of the province was without power at one point and that sort of makes sense to all of us. Everyone from Yarmouth to Sydney was hit this time and about half the population lives in Halifax which took a direct hit so 85% IS sort of reasonable. But… Our power utility does kinda suck, there isn’t enough preventative work being done at all and winds of 100 km/hr are regular in a winter storm for us. All the storms are getting worse over the last few years and the grid should be strengthened now. It’s not getting that sort of work and no one is surprised. For example three years ago a neighbor called Nova Scotia Power to tell them that a tree was getting dangerously close to the high voltage line that feeds our house. Two and a half years ago they sent a spotter out and we were told we were top priority for line clearing. Last year while frustrated and waiting for a dishwasher, honey topped the tree and this year they showed up to do the work. We kept power through most of the storm and lost it at the tail end and it was gone for 24 hours. We hooked up the generator after checking on our boat and a few customers at the tail end of the storm and ran cords to two of the neighbors in the morning, It came back about 24 hours later on Sunday evening.

Our house faired well but the driveway was pretty washed out and needed an excavator to fix it. It was passable by SUV the whole time though. For the properties we take care of there were a few trees down here and there, the worst storm surge we’ve ever seen around here and some minor dock issues because of it here and there. Since it was an easterly wind the shore toward Blanford took the worst hit. Many fish shacks on the shore were gone as were some decks on houses. Our driveway was not alone though and some were catastrophically washed out. Some of those caused crazy overland flooding and flooding over the road. Even at the height of the storm they were still passable with caution though. You might have heard that a crane collapsed over a building under construction narrowly avoiding populated ones. That’s true but when the name of the developer that owned the crane was released no one in the know was surprised any more.

We live in a really open spot that’s had some major issues in the past like, right in that spot! Almost every single storm, just the regular ones, the winter provincial snow plow has to come clear the road of rocks and debris. The road has washed out twice in the last 10 years and it’s getting worse over time. For the first time the city issued a voluntary evacuation order for people in problem prone costal areas naming three spots in particular though not ours. Here’s the thing though, we live at the top of the hill in fact we are the highest house on the hill but we are very tall and exposed. The people below us have never had waves break into their homes but it’s been close in the past. It wasn’t even close this time. It’s particularly dangerous when the storm comes at high tide which it did this time. Our house is solid and has been here a long time but we are totally exposed and it’s tall. When the wind gusts above 120 km/hr you can feel the shake in the top floor, above 140 km/hr you can feel it on the bottom floor and it gets a little scary. Sometimes we sleep downstairs when this happens. Times like this I remind myself that it’s been here almost 70 years today probably isn’t the day. Apparently in 1971 a category 2 came through as snow and it took a direct hit. Save for the odd piece of siding we’ve some out unscathed in those sorts of storms in the past. This time the house said one or two gusts of about 110 km/hr and after the meteorologists agreed. If the main road did go, and one day it probably will we have emergency only access to the trail behind us and a back way out in both directions. The waves were huge, there was some debris on the road, the plow did come but this wasn’t one of the big ones for us. The internet was down until Monday though so that’s why ya’ll are missing your Sunday post though!

I’ve seen a couple of good ones in the 7-ish years I’ve lived here and honey has seen even more in the 21 years he has including Juan. The forecast of 160 km/hr winds even scared him. I always over prepare by charging battery banks, I have a storm kit, we always have 10 gallons of water drawn off even though the well is in the basement. We’re lucky to usually have a generator, a wood stove and I always have honey. He is NS Power certified with a chainsaw, can hook even the heat pump up to the generator and the pump is set up to be easily transitioned. It’s his job to deal with disasters at many more homes than just ours. We have every tool known to man both corded, cordless air powered and in duplicate. I still always gas up the all wheel drive car, buy charcoal and our next door neighbor and friend has two excavators on site. If we were told to evacuate we would but we also know how to ride out a storm. By the time the storm made landfall 50 km as the crow flies from us it had just been downgraded to post-tropical but it was still a good one. We worked hard on Sunday and Monday getting everyone else cleaned up before getting back to regularly scheduled life but all in all it could have been a lot worse.

So that was my (limited) training and life update post Dorian. And my apologies for missing a post.  Next week I’ll let you all know how this week’s training went and post in the comments if you’re doing you’re 1/2 or full or whatever training along with me! You can download my bare minimum 1/2 marathon training plan here!