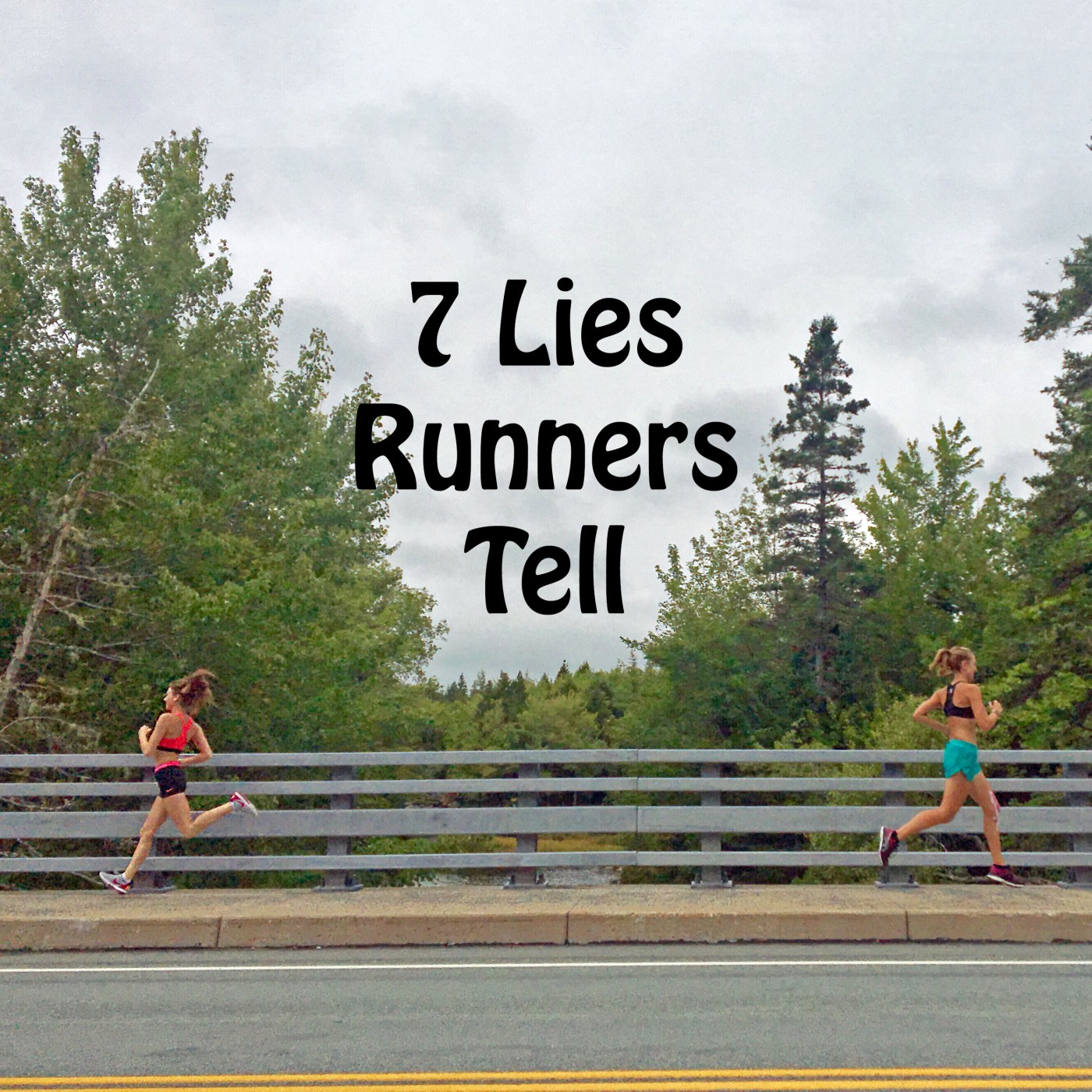 We’re a shifty, shady bunch ya’ll. We are pretty much constantly lying about our runs, running and what it means to be a runner. Sure most of them are pretty harmless and often we’re mostly lying to ourselves. If you live with a runner you might already know about some of these lies already but do you know why why we tell them? Well since I find myself telling the same running related lies over and over and seeing other runners tell them too I figured that we could have a good laugh about it. This is by no means all the lies runners tell or probably even all the running lies I tell but it is what it is. See we are not to be trusted!

Oh the classical denial of runners, “I’m not injured I’m just sore!” Runners will deny an injury for ages just to keep running. They can be limping while they do it too. If for some reason they are forced to admit that they are in fact injured, possibly by the presence of a boot or cast they will come up with a convoluted story of how their classic running injury was actually caused by something else. I’ve even heard one runner claim it was a Hosta that was responsible for their lower leg injury. We even have a wide vocabulary of terms for injuries and pain without calling it that. Things like: twinge, niggle, strain, hot spot and the list goes on.

I’ll be back in an hour

Could also be followed by “and then I’ll clean the house.” Or is that just me? Especially if the weather is unseasonably run-able runners will walk out on almost any responsibility to get a run in. They will also lie about how long that run will be. They might claim it’s just going to be a quick 5k but after that you might not see them for hours. You might believe them and mount a proper search party in the meantime before they turn up with some terrible sounding excuse. They’ll claim they just had to keep going while only referencing the current temperatures, that they felt like they were floating or their phone just kept playing all the very best running songs on their playlist. Hardly a reason to go legit missing for an hour or two. And PS after all that running they ARE NOT going to be cleaning the house!

I’m not looking for a PR

You’re just here to have fun right? One day at a race I was chatting to another runner hiding out under a roof peak to avoid the freezing cold rain for just a bit longer. I was all like “I’m going for a PR today” and she assured me that she was just out to have a good run, a marathon run but none the less just a good run. Well I did get my PR but girl won the MF-ing marathon that day! Which is to say runners at the start line are pretty chill or we don’t want to jinx ourselves. We’re quick to downplay our goals for a given race to other runners. But… this is actually a a pretty cool thing because it goes a long way to creating a welcoming space for new runners. Plus your goals are yours and if you don’t want to share, that’s cool.

Where life and running intersect sometimes we have to do things that no human alive would ever in their right mind want to do or possibly like. But we do it because some of the other days rock and that what it takes to get there. If you’re an adult human training for an endurance race with a full time job and a family you have to get up at the a$$ crack of dawn sometimes even before, roll out of bed and hit the road in the dark. That’s pretty terrible but after that you have to get ready for the day, work a full day and then do all the house stuff you have to do when you get home. Then people in life will question why you would ever do that to yourself and you have to pretend you actually like it. Sure we might say it makes us feel really productive but we’re lying, it does suck and we hate it too.

I’ll get up early and do it tomorrow

Sometimes no matter what the training plan says you just can’t, you thought about it and just no. It might be that you’re too busy but chances are you already carved out a tiny little hole in your day to get your run in but YOU ARE EXHAUSTED! So you skip it, probably the right choice by the way, and tell yourself you’ll just get up early in the morning and do it then. You won’t, or at least probably won’t but that’s the lie you tell yourself in the moment to let you skip your run. It’s cool, we all do it and the whole plan doesn’t hinge on one run, you’ll still do fine on race day.

My run was great

Not every run or race is great, how could they all be? Not every run is fun either. How could they all be? Running in the rain, freezing cold, snow or even going all out during a PR attempt does in fact suck. Plus other things happen if you get no sleep the night before, get a side stitch or just have a plain old bad run but you can’t admit that right. When honey raises an eyebrow at me as I leave the house at -10 in the dark for a run and asks “are you really going for a run now?” How can I possibly return and admit that I had a bad run? So we lie and say a race where we almost threw up was “so much fun” and a terrible slow run where it felt like the whole run was uphill was “just great!” Hell some people think the whole idea of running in general seems like a method of torture how can we admit to those people that sometimes it does kinda suck.

After this no more running talk

God help you if you are the only non-runner in a group of runners because all you are going to hear about is running. Our last run, our next race and what gear we want to buy, literally we can go on for hours. It’s surprising just how many sentences you can start with “The time I ran a marathon…” Literally hundreds, maybe more. Sometimes we even know that our running talk is on people’s last nerve but we just can’t help it. We may even say “after this no more running talk tonight” but guess what we’re not going to stop! If there is an audience we will talk about running as long as they stay awake maybe even after they fall asleep since it’s pretty much a one sided conversation.

So that’s it all (some of) the lies runners tell. Do you tell these lies or different lies? What is the most frequent running lie you tell?