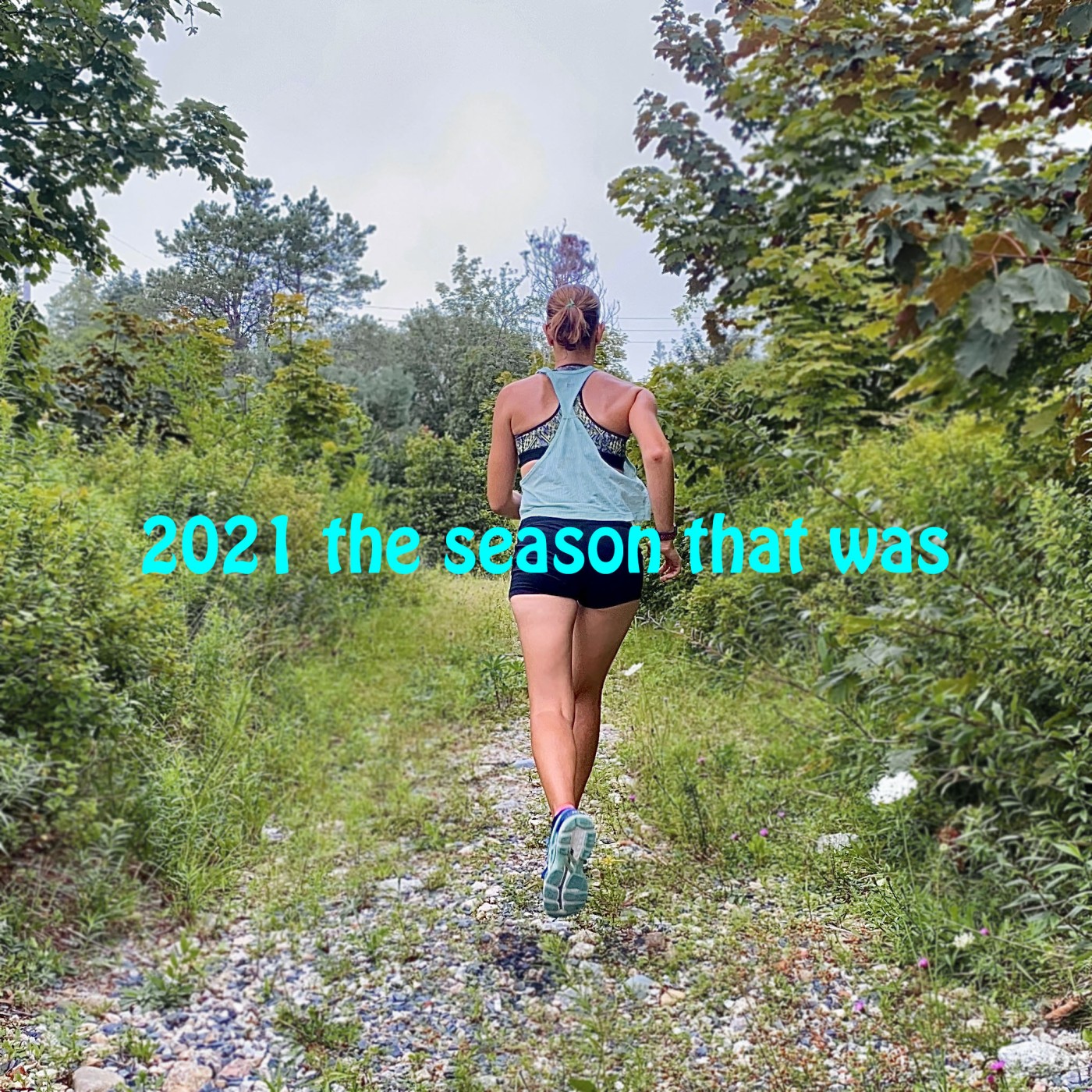 In a lot of ways 2021 was a lot like 2020 again around here. But there was one big and important difference. In 2021 we already had one pandemic year interrupted so we kinda knew what was coming in 2021. 2020 turned out not to be a running year for me but it still taught me a lot about running. This year though was a big one with out a whole lot of events. 2 of three were PB’s, one was a dream come true for me and the other a dream come true for my mom! I also signed up for one of those long distance events where you get a medal when you finally complete the distance. I was waiting until my medal arrived for that one to do this post. Oh yeah and I did my first marathon this year, so that was cool!

Our province had been very prudent in gathering limits and restrictions for the entirety of the pandemic. With that in mind there wasn’t any guarantees that races would happen at all this year so travel was out and virtual was the safest bet. We had a flare up at the start of the year and again in the spring. We were asked not to leave our home counties unless it was for work or essential at a few points. The fact that this could happen again was on my mind. What really influenced my race season this year was the fact that The Boston Marathon was having a virtual event for the first time and only this year. If there was a chance to do that I was going for it!

And I did get in after a bit of a struggle with my name and birthdate. As the registration was opening I realized the likely problem and registered with my married name even though I don’t actually use it. This made honey insanely happy by the way! Once I got in that was it. Since I know that other races along the way can really detract from your number one goal I wasn’t planning on signing up for anything else. But… I did get pulled into one little 5k along the way. I’ve also always told my mom that if she ever wanted to tackle a half marathon I would 100% do it with her. She did and we actually picked the race together so I could meet my goals and she could meet hers this season.

Off to a rocky start

Pretty early in the spring and late winter I was doing okay at base building. I got out there once a week in February and early March. More than that and some longer runs toward the end of March and the plan was to use the next 7 weeks to get my milage higher. But you know plans sometimes don’t quite work out. At the end of March I was gardening at a customer’s property, nothing strenuous at all and when I stood up there was this searing, popping pain in my ‘good’ knee. It was bad enough that I stayed home for a couple of days and did driving duty only for a week after that. Looking back I think it was a torn meniscus but I can’t be really sure. It made me worry a lot at the time but the best time for an injury this year was with 6-8 weeks to heal. Honestly when I started training at the end of May it as a lot better but still very much bothering me. I was panicked that was the end of my Boston dreams. Spoiler alert, it was not.

Even though I said that I wasn’t going to let anyone or anything distract me from my main goal, I did. But in my defense the medal WAS a popsicle and I really like popsicles! Well not like a true love of popsicles but I rarely turn one down. This one was one of the few events open for registration at the time and was scheduled towards the end of August. Right or wrong I signed up for it as soon as the email hit my inbox. When the time rolled around, 3 months into marathon training, it really messed up my training that week as none of my runs were anywhere as short as a 5k. But I ended up getting a 5k PR because my nerves were a bit high that morning. It did feel really great though to have some tangible proof that all this training was paying off.

AkA how I spent my summer. I figured that with COVID still raging and some help at work this year there really would never be a better time for me to do a full. That is true but also I really wanted to seize the opportunity to do this specific race. Looking back I was pretty confident that I could get this done as long as I didn’t stay or get more injured. Along the way I wrote a post about why I might never do this again and that all might still be true. But pretty much as soon as I was done I started thinking about what it would be like to do a full in person. I’ve always wanted to run my first full under a 5 hours and I missed it by 11 minutes. Which to be perfectly clear I was thrilled with. If I didn’t have to walk at least 2 km of the thing due to road conditions and I wasn’t on my own I’m sure I could meet that goal. I’m super proud of my Boston virtual medal, like save it in a fire proud. This year between covid and work is not going to be the year I do it again but you never know what I’ll do for a 40th birthday celebration.

I knew that after my full and the training for it I had to take a few months off to gain some weight back and get my hormones right again. In the three months after I only ran one 15 k training run and the half at Bluenose with my mom. Pretty much ever since my mom started running it’s been filling that dream big, do big part of her life. Just like the rest of us she wants to go faster and farther than she sometimes admits. Ever since her first 10k I think a half has been something she’s toyed with. This was her year too! She did awesome in training using this plan and on race day as well. She was strong all the way through but the distance did get to her. Thankfully for everyone including her, the race went as sheduled between peaks. It was awesome beyond words to get to do that with her in such a great environment. Truth be told I’m more proud of her than I am of myself this year.

It was a week or two after I started training that I realized this was going to be a lot and for a really, really long time. I was aware of the conqueror challenges from ads on social media. I thought it would be pretty fun to incentivize the training period too this time. I was pretty dedicated to this idea but I was shocked to find out how affordable an option it was, how cool the medals were and some of the neat perks along the way. I figured there was a map and a medal at the end. But the percentage tracker, the postcards and especially the trees they plant in your honor along the way are so cool! It was only like $50 bucks too! I would 10/10 do this for a longer training plan again! You can input your distances for all sorts of activities so it would be great for a triathlon too. Since I did skip a run here and there I had about 20 km leftover to make up after training and the half ended. To me that’s a crazy good price for a dope medal, the app development, some trees and shipping internationally is all included in that. It makes me wonder if they make money mostly off the people who don’t finish. I really recommend this especially if you’re having a hard time getting excited about training.

Looking back and looking ahead

I think that I accomplished a lot this year. Running my first full was pretty special even during covid virtually. Taking over 2 minutes off my 5k time was a pretty great bonus too. Running with my mom while she was making her dreams come true was a pretty great high to top off the season. It’s not to say that the people that support me in day to day life didn’t support me this time but this felt a lot more like a solo event than it has in the past. All of my other big training has happened while working with honey on his projects, this year I was working everyday for myself. Those long runs were really long and it was hours and hours alone. Obviously race day, heading out the door and all those 42 km were on my own too. Looking back on my first full I don’t really feel robbed that it was virtual I really like that it’s an accomplishment I feel like I have all to myself

So what’s in the cards for next year then? Honestly, I have no idea. Due to those boring day to day things in life this summer work has to be priority number one. Sister needs a new truck! I need to do more than I did last year and make a few more bucks. That and I don’t think this year is the year for committing to training for something that would break my heart if it was canceled, which I feel like could totally happen. Right now I’m thinking of a few options. One would be a half, I do that in the years I don’t do anything huge now I guess. Apparently the Nova Scotia Marathon in Barrington is just a stunning course and we have some people there so that’s an option. If it got canceled I could deal with that. On that note doing another olympic (probably back at Melmerby) or an in person full would probably be too hard to deal with if it got canceled.

Then there is a third option that I’m really thinking hard about. It’s been a long, long time since I had a season where I just ran because I want to. I think 2016 it think to be exact. I’m still not emotionally over not running at all in the summer of 2020. I still feel a bit like I let myself down that year. On the other hand there was too much structure for too long this year. What if this year I ran frequently and decent milage just because I want to again and of course pick up whatever races I can along the way. So I guess the takeaway for now is no real clear plan, which is probably fair given the state of the world at the moment.

How was your last year of running? Was it changed by the pandemic again this year for you too? What are you planning for next year? Leave it in the comments below!