Runners are weird and totally unique sorts of people. If you are one or god help you happen to live with one you already know that. We run every weekend, we talk about every single day, it hurts sometimes, we do it late at night or first thing in the morning when normal sane people are sleeping. We PAY money to race knowing we won’t be winning and we train for weeks to do it! Do we know something you don’t? Yes, Yes we do and here’s 15 of those things!

Yes as recently as 100 years ago people lived as one with the land and some people still claim to like winter camping. But running in slightly inclement weather also make you feel like a warrior. Below freezing and a slight flurry while you’re running can make you feel like a full on warrior.  Even though I avoid running in more than a drizzle in training as much as possible skipping a 5k fun run due to a freezing rain storm is just not an option.

King of like Oprah and her cars but it really is cool that after each and every race you walk away with a medal. For some people it’s about the t-shirts but I’m a blingy medal sort of gal. Sure some people blame this sort of thing on what’s wrong with kids today but I’m and adult and I want a freakin’ medal. 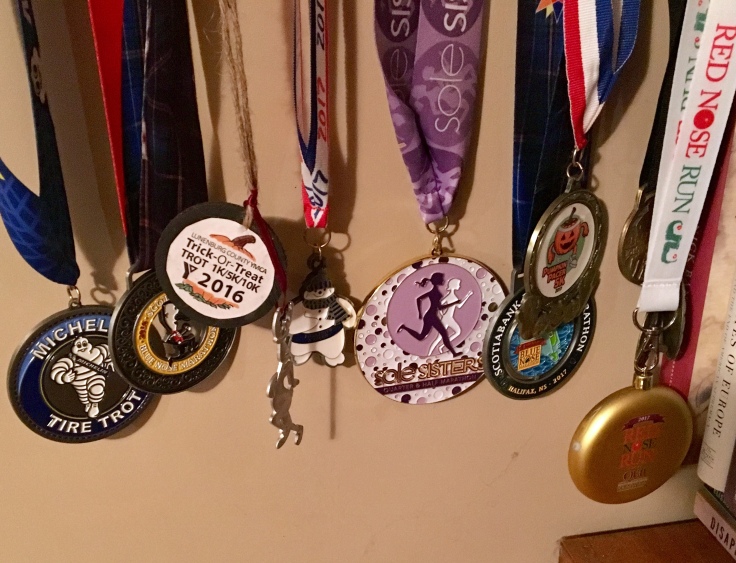 Today obesity and people’s health in general are in a terrible way. Less than 4% of Canadians and Americans get 30 minutes of moderate exercise 5 times a week. Normal blood pressures, heart rate other measures of health are regularly readjusted upward since the average person is so much less healthy than they were in years past. I can only imagine how frustrated doctors are with these trends. Then a runner walks into the office with their healthy body weight, hella low pulse and changes things up. They encourage you, smile and take your injuries seriously. You get an A, a gold star and just a little admiration.

4. Exercise and therapy for free!

There’s no doubt that running boosts you mood but it does a lot more than that. The clarity that comes when you’re running can really help you work through a problem in your life and the energy to see it through. All of those running memes are right there is almost no situation a run can’t help with.

There is a reason that so many people treat running like a religion or a drug, it’s because it can do more for you than the real thing. All the that serotonin, dopamine and adrenaline surging through your veins (check out an article I wrote on that here) actually trigger the same pathways as a lot of drugs. Actually its all about the science of the runner’s high which is definitely a thing.

6. People think of you as a super hero!

I find sometimes that my running seems sort of paltry, I’m not very fast, a bit this side of average which I worked hard for over two years and I’ve only ever done the 1/2 and a sprint. There are so many ironman, Boston Qualifying ultra runners out there both older and younger than me I can sometime forget that your average teenager can’t run a mile (or km). But when other’s hear of your weekend workouts alone they think you are AMAZING!

Sure it’s a bit trivial but it is nice to look your best. It’s nice that you look as good as anyone can in that god awful bridesmaids dress. It’s really nice not to be self conscious about your body and to a certain extent it doesn’t even matter what it looks like if your a regular runner you’re strong, self-confident and its as great as you can make it.

8. Even better you get to live in that body!

Now this is the important one you get to live all the time in the body of a regular runner. Overall you are adding about 6 years to your life and virtually guaranteeing the end of your life will be better than it would have been. But long before you get there you’ll feel amazing! You feel energized even when your not running, you feel powerful, strong and incredibly healthy. Plus if your a racer pulling in those new distances and PR’s is one hell of a rush!

Ever feel like your social content is sorta boring, or braggy or something…? Well take up running you get to post pictures of hard to drive to places, finish line pics of charitable races and sweaty selfies. I have it especially great since honey is not a runner (except that one time) so as a way to encourage me he posts a picture of me starting and I get all the encouraging words on my watch as I go. Take up running, win at instagram. PS Getwifed joined instagram this week check it out here! Or you could blog about it!

I’m not a social butterfly and meeting friends as an adult can be hard and it can be hard to catch up with old ones. But you will meet runner friends and talk about runner stuff, it really can be a great way to make friends. If this is something you’re after consider taking a running course or joining a free club at your local running shop. Or if you’re like me try to convert your friends into running friends. On the other side staying in touch with running peeps. For example I run into a tutor mom at the start line of races from over 10 years ago and it’s nice to catch up on things.

Truthfully this is more my zone than running friends but I have gotten better with time. Honey and I work together for the most part so running can be some great me time. Plus it’s super efficient you go running for about an hour, get your alone time to think, stay super fit, see some pretty sights up close and return in a great mood. It’s one of the best forms of self-care out there!

12. You trained for a race the confidence was just a bonus!

Being a runner or generally just reasonably fit is a confidence boost in and of it’s self but training for and then running a race is it’s own special confidence builder. It probably comes from a dopamine response which is usually blamed for the addictive nature of drugs. Dopamine is your bodies way of rewarding you for learning and accomplishing long term goals. Part of that amazing race day feeling you get, even if you didn’t come close to winning, is your hard earned dopamine rush. In the longer term boosts you mood and your confidence that you’ll be able to rise to the next challenge.

Regular peeps just don’t get runners and that’s fine. People call you crazy on the regular especially if you get into and pass those 10k distances. Around 21 and the 1/2 marathon, or really anything that involves the word triathlon, people literally think you nuts and that’s a great thing sometimes. People think all you do is run, that you must be crazy in the kitchen too and that you’re out there pounding the pavement when no one is driving all year long. That’s not the case and you know literally anyone can do it if they wanted to but… People thinking you’re nuts from time to time isn’t always bad!

I’m prepared to be alone on this but running really reframes your whole laundry situation. And after thinking about it it may very well be specific to running. If you’re going to the gym people will see you so high bar and after I come home from mountain biking I shower in my clothes to prevent getting the washer too crusty, well if Richard isn’t home. Sometimes he insists on hosing me down outside, yeah I like puddles! But we know that no one is going to see us close enough to know if there is a spit, or other, stain on your shirt and unless the smell is bad enough to distract you it’s clean enough to go running in. The really nice thing about this really is it’s a bit of a stand in for letting the little things go in life so you can do more fun things, like go for a run!

It’s not to say you can just live on poutine alone, although if you figure out a way let me know, but you can be pretty flexible with your diet. Side bar if you’re not Canadian and you don’t know what poutine is look into it, it’s our gift to the world. Running isn’t actually the best way to loose weight, a healthy diet is, but if you’re running 5k four times a week your burning about 1400 calories a week which is just a hair over 1.8 medium veggie pizzas each and every week. But not having to think twice about desert rocks!

15. You realize your stronger than you think!

I like to tell people that I couldn’t run from lamppost to lamppost when I first started running because it’s true. The first time I ran a whole km it surprised me as did the first 5k and the first 10k blew my mind. If you choose to start running you WILL end up doing things you never thought were possible and if you ARE a runner you already have.

What great things did being a runner teach you? What is one awesome thing I didn’t include here?