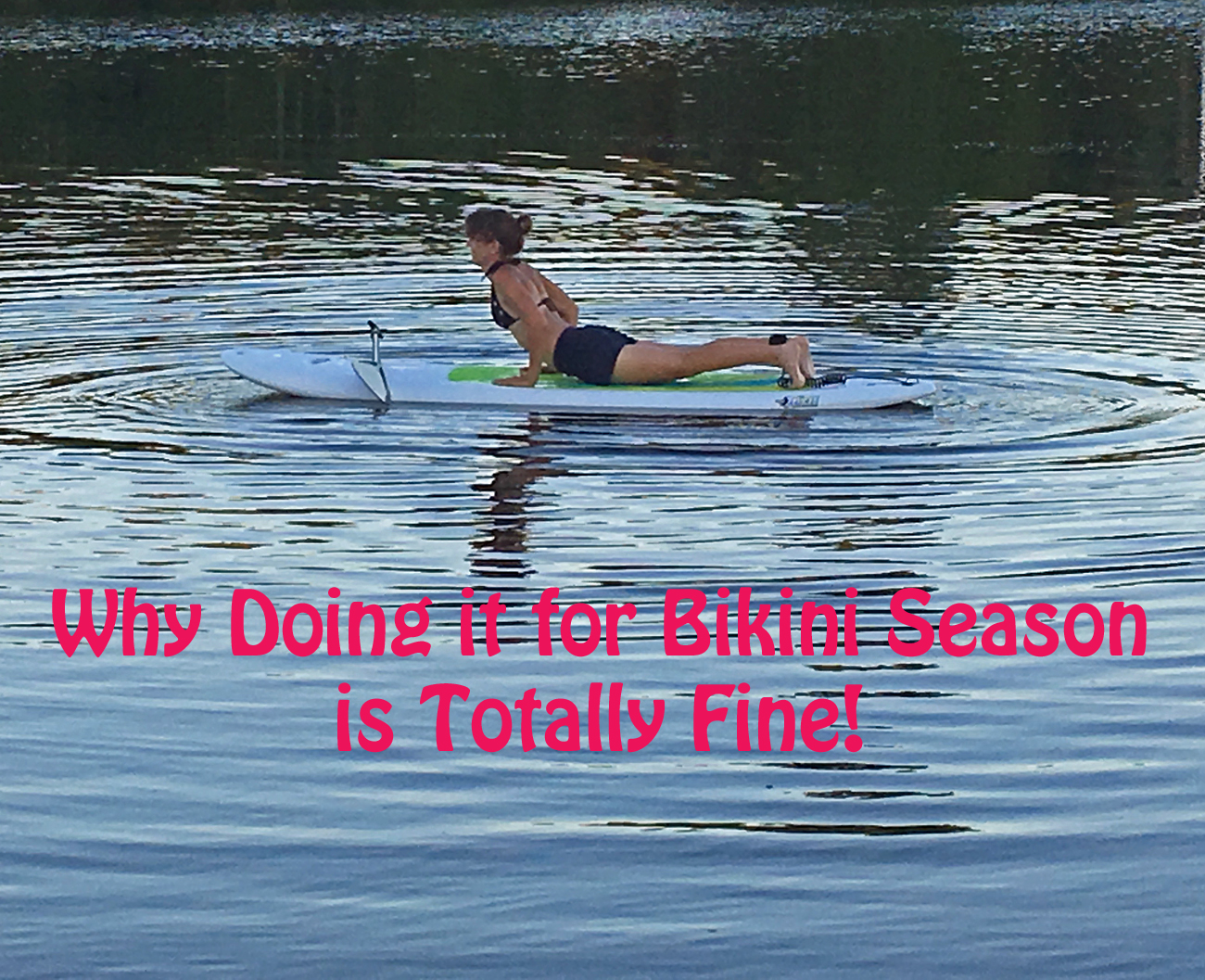 Guess what I’ve been saying this year with a lot of dramatic emphasis? “I can’t wait for bikini season this year!” Then I went upstairs and put one on in March just to make my point. Am I a narcissistic, self-involved ass-hole? Maybe, but I really don’t think so. Lots of people are motivated to get in shape for bikini season, a wedding (maybe yours) or to make somebody else jealous. Let’s be real these aren’t the best reasons to get in shape but they are reasons and I’m here to tell you why that’s good enough.

Pretty much every year for the past five years I’ve gotten into the best shape of my life and had some amazing experiences along the way. I’ve generally been a pretty dang fit girl save for about 4 years in grad school. I did want to improve my health as a motivating factor but I HATED my body too! I hated how I looked and felt in clothes, how bloated I felt and finally one super unflattering picture (not sharing just yet) made me sit up and take notice. I knew some things had to change big, big things but I had a few hurdles to jump over first. Once I finished with my defence I got back up and started running again. That summer 5 years ago I clocked over 2000 km on my bike in the woods and pulled off my first dirty century ride in well over a decade. The next year I was on track to beat my kms and my time and then I got hit with a 1/4 scale RC gas car, got 7 stitches in my foot and spent a week on crutches. But that actually ended up getting me to embrace the idea of racing, with no hope of winning for the first time ever. You can read about how getting my first hospital related injury led me to doing my first triathlon. The next year it was my first 10 k and half marathon. Last year I maintained that level of fitness while nursing a knee injury and doing so many fun races I never seem to get to in other years.

Which brings us to this year, and then I promise well get onto why pretty much any motivation will do in a minute. This year I’m STARTING my season with a half marathon in may to get me ready to take on the olympic half for the first time in July. But you know what I love that I have a kickin’ body too boot. The jiggly bits pretty much disappeared in 6 months on the bike, the abs came out training for my first half and last summer I got as strong as your average man last year carrying 2 wharfs up hill and two new ones back down. Last summer my designated worksite swimmer role was really pressed into service with lots of workers, customers and on one ill fated mooring trip, beach goers around. I would like to say it never bothered me to strip down to my skivvies in front of everyone but that would be a lie. It’s a lie because I was actually excited to show off all my hard work and I’m proud of it. So why is a ‘bad’ motive a good enough place to start?

This is ultimately the reason behind the bikini season reason and a number of similar ones. Let me start by saying I don’t care at all what you or your body looks like. I just care if you’re a decent human or not. I might even suggest that if it matters to someone else maybe they shouldn’t matter to you? But what I look like does matter to me and what you look like probably matters to you too. Hey, we’re all human right? When I’m not happy with my body I have zero confidence and I actually feel self conscious, like all the time. I don’t feel like I’m comfortable no matter what clothes I’m wearing and I tend to really want to cover up. It’s stupid really because you are your own worst critic and all of the things you’re obsessing over others probably aren’t even registering. But it can slowly eat away at your whole life. But it’s a sucky way to go through life. Feeling confident in even the best situations is next to impossible let alone situations that are bound to be a little awkward. If someone, including yourself, gives you shade about vanity being a reason to make some changes at least you’re doing it for yourself!

I’m not talking about someone who loves you very much raising concerns about your health which can sting but the motivation behind it is pretty pure. Read on for that. Rather I’m talking about someone wanting you to make changes to your outsides specifically. That might be a parent concerned with your image, a partner that wants you to get plastic surgery or if a friend makes comments that you should be hotter. This is probably the worst reason to start working out and get healthy. But… the thing is it’s you that’s going to see the biggest benefit and it might backfire for that jerky person in the long run. This is basically the storey line for every episode of Khole Kardashian’s show revenge body, yes I watch it. Essentially a person decides to get in shape to get back at an old boyfriend, a mean mom or something similar. The thing is by the end of the process that participant has gained enough confidence and sweated through their feelings to the point they don’t really care anymore. You’re the one in the end that feels better, has more energy and confidence in everyday life. It’s you who will be on the road to living your best life possible and realizing just how nasty that person was in the first place. Working through your stuff might even lead to you cutting that person loose if they deserve it!

Because You’re Pushed Into it

Very possibly kicking and screaming! There’s a few ways this can shake down but probably the most likely is by a doctor. Maybe you get bad news from a test or have a genuine health scare that makes you (and potentially people who love you) sit up and take notice of you’re unhealthy lifestyle. Then either you or a loved one decides you have to make a change no matter how little you actually want to. I had an uncle that was diagnosed as diabetic in his early 50’s and his wife didn’t think that he was getting enough morning walks in despite verbally committing to it a few plus times. So she took to loading him in the car and dropping him off down the road giving him no choice but to walk home! The thing is he lived into his 80’s and all four of his brothers died in their 50’s and early 60’s! If you’re pushed into (even really hard and a bit meanly) by someone who cares for you, it’s going to be you in the long run that reaps all the rewards and chances are you’ll end up grateful to that person for pushing you in the first place!

Because You’re a Joiner

I put this under happy accidents really. Perhaps you’re friend or partner has gotten really into a new sport or maybe you’re just jumping on a current trend. I have a girlfriend that got into running fun 5k’s when her husband discovered he had elite runner potential in his 30’s. I’m currently working on making my mom and stepdad into runners in their 60’s. Perhaps for you it was aerobics, spinning, pole dancing or Zumba that got your foot in the door initially. Whether you put it down to jumping on the band wagon or finding a true passion that happened to be popular it doesn’t really matter. Joining in on a good thing is just that at good thing!

I’ve recently realized what my answer to that Miss America, “How would you change the world to make it a better place?” Question would be. It sounds flighty at first but I stand by it. My answer would be to have every person live in the best possible version of their body for a week. Weird right? The thing is if everyone had that opportunity I think that they would feel so amazing that they would want to get back to a version of that. I know getting back in shape after grad school was pretty much priority one for me. It doesn’t really take that much work and putting the work in during exercise is what boosts your mental health. So on an an individual basis each person would be healthier, have more energy, feel more confident, be in a better mood and I can’t imagine that that wouldn’t have a huge positive effect of everyone’s life.

Let’s zoom out on that idea now. If almost all of the population was fit, happy and as healthy as they could be the world at large would be a much different place. First I think we’d all be nicer to each other but it goes deeper than that. Imagine if we took all the money we spend each year on lifestyle related health costs (like obesity) and diverted that to things like education, charity and social programs among other things. It really would change the world for the better. No matter how bad your reason is for making healthy changes its still a great thing to do!

What were you’re bad reasons for taking on your level of fitness? How fast did it morph into a set of good reasons for you?