When you think about taking on a challenge weeks like this week are the ones that keeps you from doing it. It’s also what makes you sound crazy when you tell others about what you’re doing! I broke a trainee, They messed with the schedule (which turned out to be a good thing), it serious snowed twice and I got super duper sick… Needless to say this made it a tough one! I even gave myself permission to skip up to two runs, but I didn’t so there’s that but its over now so let’s dig into it.

Monday 4km shake out: Usually Mondays are a rest day after a long run but my trainees are flying the coop again so to accommodate their running schedule I did a recovery run on Monday with them. Also I should stop using plurals here since I BROKE A TRAINEE, sort of, not really… My mom’s knee pain had her limping at easter super last week so I benched her at the end of last week. She’s since seen a doctor and she has an inflamed ligament below her knee which is caused by twisting motions. She said it was probably lugging wood with the wheelbarrow not running but I’m sure it didn’t help. I still feel guilty. So what did I do I invited my remaining trainee to do an extra km with me and he did and then got 5 new achievements from nike! Yeah!!! Nothing too exciting about this one but it was sad my mom wasn’t there.

Tuesday 11 km tempo run: I keep saying I can’t keep doing these at the crack of dawn and yet… Mother nature keeps making that not true. Since My shakeout was done a day early I figured why not get the speed work done early too since Wednesday was forecasted to be another snow event. This wasn’t a fast or fun run. There was a 1.5 km stretch in the middle that kicked my but which I put down to 4 run days in a row including a long run and speed work, little did I know I was about to get hit with an influenza bat, hard. When I’m feeling tiered or sore, or like I might be tiered or sore I have a very long, very hot bath with epsom salts, which I recommend. Tuesday night after tubby time I was so weak and dizzy getting out I considered calling honey to come help me but that seemed overly dramatic. The writing was on the wall for Wednesday morning of death sickness. uggg.

Friday 16 km long run: After two rest days I still wasn’t feeling 100% but there was snow in the forecast the next two days. Honey had caught the man cold which he swore was actually the plague with a side of ebola so we quit early and I did my long run. Which actually went okay all things considered and 15 seconds per km faster than it should have been. My house is about 6 km from my mom’s and I was running 2 km past it today and I told honey that if I couldn’t hack it today I would just pick up one of their cars and drive home. Sometimes having an out is a good idea. I actually felt pretty good and with a few cough drops I made it through. 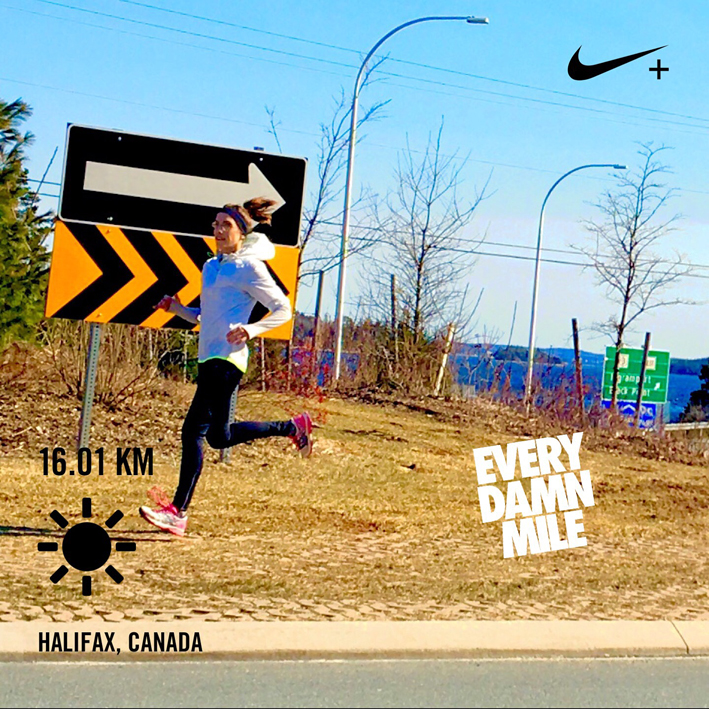 Saturday: 6 k recovery: Usually after a long run it’s a rest day but skipping a few runs basically meant I had a few junk miles to complete, 11 km to be exact so I split them in half over the next few days. It sort of shocked me that this was a really fast one for me even with a lingering sore throat and runny nose. Also I finally blew the perfect snot rocket, gross but kind of an accomplishment none the less. 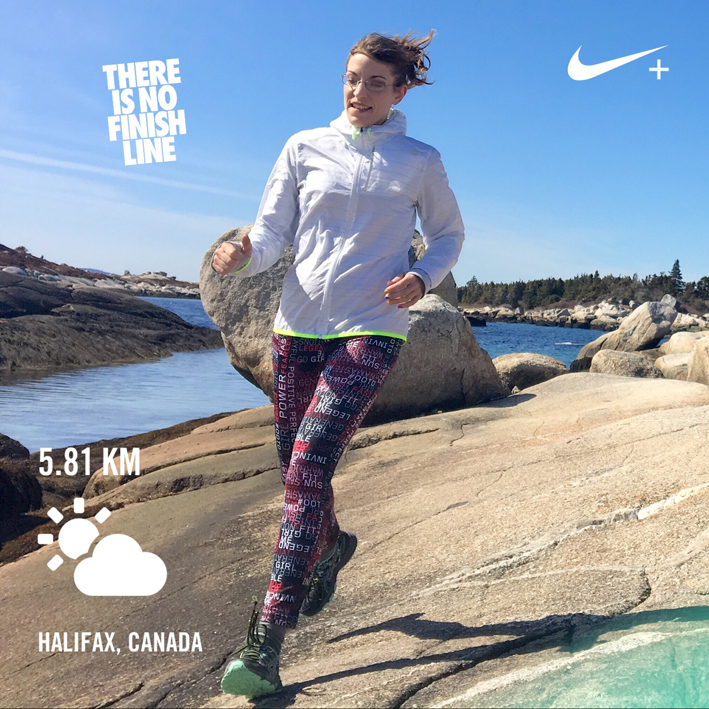 Sunday: 5k something run: I got up a little earlier than I wanted to to get my run in before the SNOWSTORM in freaking April started. I had given myself permission to skip this one but… I have a really good nike Sunday 5k streak going and that’s what got me out the door. Got it done but she was a rough one! Usually I take 20 shots to get a good instagram pic, Sunday it took 60 and I still wasn’t thrilled with any of them. Pick one and done. So all in all not a great week but with any luck this cold will finally let go and this week will be better!