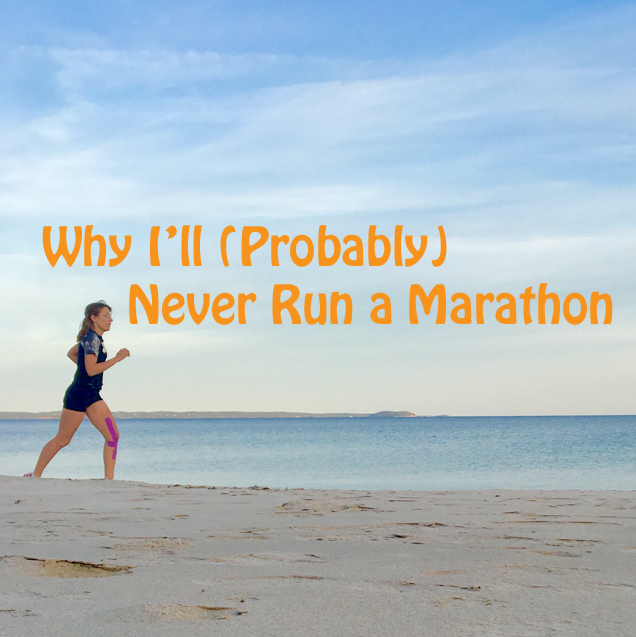 Or Ironman or half Ironman for that matter and that’s okay. This is not a marathoners are stupid boring people post in fact quite the opposite. I also get that if you can run a half or even a 10 k you can take the time and train for a full marathon. But I’m not sure if I’ll ever do it. I’m also okay with that. I think. Sometimes you’ll se kinda crappy stuff out there in the running world that can make you feel like any run less than a full is nothing special. Things like you don’t need to taper for a half, or eat or do some serious recovery. On the other hand marathoners take their dedication to the next level and that’s amazing! I look to you kids with awe and wonder but I don’t think I’ll ever line up with you guys on race day. On the other hand the average first time marathoner is closer to 40 and my extended family apparently has a bet of when I’ll finally take the plunge.

This is probably the one that hold a lot of us back from taking the plunge. I run a decent amount and if it’s not a running year it’s a biking year. Preparing for a half takes me about 12 weeks and only about 4 are crazy training weeks. These weeks hit over 50 km and involve 14 km weekday runs and 20 km plus weekend long runs. In fact I just finished a half marathon training cycle and race and those 4 weeks are brutal. Yes on the body but more so on the schedule and my life! I can’t for the life of me imagine DOUBLING that! In those hard and heavy training weeks I start to resent running a little bit and getting 7 or so weeks in and not wanting to have done that for no reason is what keeps me going at that point some days.

I get that that’s what makes it hard and it takes commitment, I’m also ready to hear that even though I think I know how hard it is, I don’t. The thing is running at all takes some dedication and planning. But so to does a 10k training plan or a half. It’s not the same but it still can be something else!

If you’ve dealt with an injury, and who hasn’t, the idea of running a full can be downright scary. It’s something that’s always at the back of my mind, will my knee or hip make it through this training cycle or even will this cycle make it worse? I’ve used knee braces in the past and KT tape more recently but when the though of a full crosses my mind, old injuries are the very next thought. That doesn’t necessarily have to be the case for you if you want to do a full injures don’t have to hold you back. See your doctor, see a great sports physical therapist and see a run coach to work on your form. But this among other things does keep me at least from tackling the full.

Most of the benefits care in a half

There are physical benefits to doing a full for sure and those benefits are definitely there in a half but that’s not what this bit is really all about. Either way you’ll be in amazing shape, have a healthy cardiovascular system and incredible energy and stamina. I’m sure there are more to a full but I also don’t think it’s double that half. More benefits are mental though rather than physical. Tackling an impossible seeming challenge gives you so much confidence in so many areas of your life. Running is increasable for your mood just check out this post I did on sad runner about that and there are incredible benefits to a regular rigorous fitness routine for your mental health. Wether it’s a full or a half dedicating yourself to training is an exercise that makes you grow as a person. I was surprised to find that after my first half it had really changed the way I viewed my life which you can read about here. I mean genuinely changed and very genuinely surprised to find it improved my mental health, my relationship with honey and with my family. Had it been a full first I’m sure those benefits would be the same but they were certainly there for the half too. 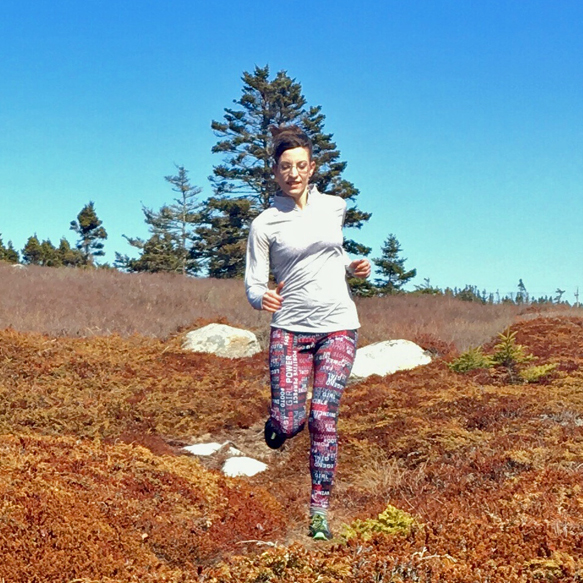 Cost (sort of, not really, but kinda)

We run our own business and that means we’re busy folks. Even if I run a half that time has to come from somewhere and some of that is work some is also sleep and that’s not a big selling point either. If I were to train for a full the race would be in the summer or fall. If I opted for a full at Bluenose in the spring I would be training all spring and that would mean taking half a year off tutoring. I would likely aim for a race in the early fall like valley harvest and train all summer. That would mean dropping the ball a whole lot during our busy work season. Now that wouldn’t have a big impact on my personal finances but it would put a tremendous amount more pressure, on honey because if I drop the ball someone else has to pick it up and that’s not fair. At the very least it would mean saying no to ‘extra’ income projects and that’s not something people who work for themselves can really afford to do.

The wall and 32 km longest runs

I really think that besides the 5k the first time you run a race you should save the distance for the day. You can read about that, how far to go and why here if you’re interested. But I also think you should come really close. Once you’ve run 9.5 km for a 10k or 20 for a half you’re pretty dang sure you can bring it on race day when you need to. In training for a full you do a series of 32 km runs as you’re longest runs before running 10 MORE on race day. I’ve heard that the wall comes somewhere between 32 and 42 km and you only want to do that on race day, once. It’s also commonly held that running a full is too hard on your body to also do it, or anything close on race day. Researchers also have discovered that full marathons, extreme cycle races and ironmans cause very temporary damage to the heart that returns to normal about a week after. That last part has no effect on my desire to run a full, it actually sounds kinda badass to me but having my longest training run 10k shorter than my race sounds terrifying.

In training for other races getting really, really close to the race day distance is so comforting. Training shows you that you can in fact get it done on race day and then the big day is all reward. I don’t think I would deal well with that gap anxiety knowing something called THE WALL is about to hit me. Now that I think about it more, this is probably the number one thing holding me back.

This is the I’m not cute enough of the running world isn’t it? Foolish, yet on your mind. When I start thinking about doing a full I immediately start thinking about how slow I would be. I make it really clear that I am a recreational, not fast, not in it to win it racer. Even if I tried really, really hard I don’t think I could ever get myself to a point where I won or even placed in my age group at medium sized local races. And I’m not mad at that, at all! It’s not to say I don’t try and accomplish things though. I’m super proud to say that after last month’s half I’m ever so slightly faster that the average female in the half, 10k and 5k (by quite a bit in that case.) Believe me I tried HARD for all of those minutes ahead of the average lady and the average lady in each race is pretty much my age too. See I am proud and as someone who started off way slower than average I should be!

But then I think my marathon time would be like 4:45 if not a hair more and that doesn’t sound great does it? Then I start looking up celebrity marathon times and even the ones you think you’d be faster than like Drew Carey (4:37), Bobby Flay (4:01) and Oprah (4:29) have some respectable times. Though I would beat the likes of Katie Holmes (5:29), Al Roker (7:09), Teri Hatcher (5:06) and Pam Anderson (5:41). Ps on running sites none of these times are held up as ‘fast’ in any way though, that’s not really fair at least they all dared to try and they finished! Silly I know but I’d want to be a bit faster than that if I’m honest.

So this isn’t really a reason holding me back but it’s a thing none the less. The recovery from a full is supposed to be epic. While I don’t put a lot of stock into the you don’t need to taper, fuel or recover after any race shorter than a full I am inclined to believe the recovery after a full could really kick your butt into at least the next week. For four days after my last half all I wanted to do was sleep and be cranky. I was dragging my butt until the Thursday after my last half and I imagine that would be more intense and last longer. But really I could deal with that part at least!

Right now I’m firmly in a never ever doing another half phase after Bluenose this year. I accomplished my super goal and PR-ed by 7 minutes, so I’m good, for now. But I know there are a lot of things that could change that even this year. If my New York cousins or aunt wanted to do the Disney Princess Half with me I’d be there next week, Ditto for the opportunity to do a destination race like NYC, London or Vegas. If one of my trainee’s or Honey’s daughter wanted to do one this fall I’d be there too. Hell check back in 2019 and I’ll probably be training for one on my own again! Given all that I’m not willing to say never ever to a full but as of now no short, medium or long term plans!

What got you to finally concur you’re first full marathon? Which of my concerns shouldn’t concern me at all? And if you did one did you ever do another?

13 thoughts on “Why I’ll Probably Never Run a Marathon”